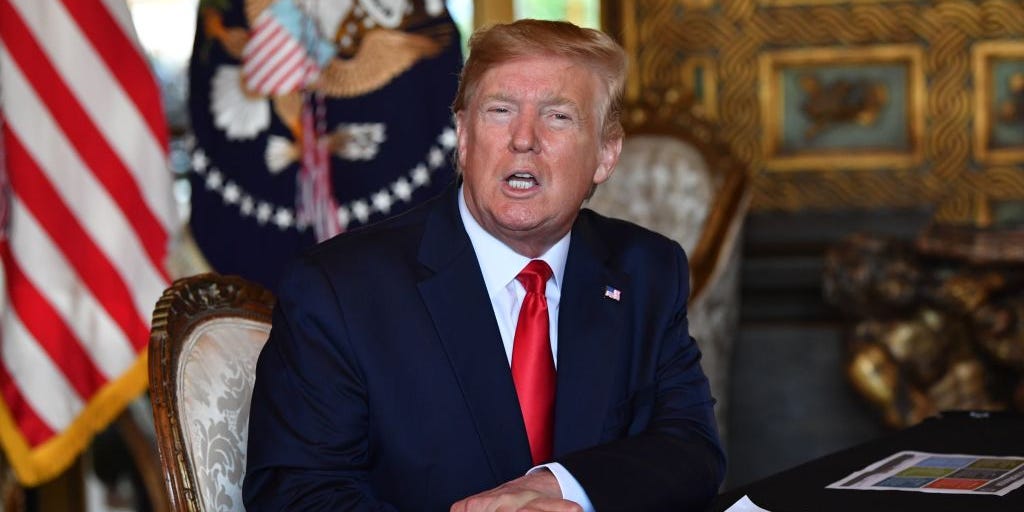 “Nothing like this has ever happened to a President of the United States before,” the statement said. “After working and cooperating with the relevant Government agencies, this unannounced raid on my home was not necessary or appropriate.”

The search was first reported by Florida Politics and later confirmed by Trump, who was not at his private South Florida club at the time.

It’s unclear what the warrant was related to. The Justice Department is currently scrutinizing Trump’s efforts to overturn the results of the 2020 US election. The National Archives also asked the department in February to investigate if Trump broke the law when he took official government records with him to Mar-a-Lago after leaving the White House.

The former president accused the bureau of prosecutorial misconduct in his statement and suggested the raid was part of a politically motivated plot to stop him from running for president in 2024.

“They even broke into my safe!” he said.

Former Trump associates quickly sized up the latest legal development as a pretty bad one for the ex-president.

Raiding Trump’s personal residence is also an unprecedented move for federal law enforcement, and one that many legal experts say wouldn’t have been done without merit.

“It’s of course very significant,” said Jack Quinn, a former White House counsel to President Bill Clinton. He said the raid appeared to be centered around how Trump handled government records when he left the White House  “but once the agents are in, they’re entitled to remove any evidence of wrongdoing of any kind.”

“Simply cannot overstate the significance of this step,” added Peter Zeidenberg, who served on the Justice Department’s special-prosecution team during the George W. Bush-era Valerie Plame Wilson investigation.  He noted that a move of this degree would need to have gotten Attorney General Merrick Garland’s approval.

“So that says a lot about AG Garland’s willingness to prosecute Trump,” he said. “Obviously, a lot will depend on what the FBI was looking for and if they found it. But if they did, a prosecution could be next. Question remains, for what? With Trump, there are innumerable possibilities.”

Barbara McQuade, a former federal prosecutor, also highlighted in an email to Insider that the FBI in its bid to get a search warrant would have had to satisfy a federal judge that there was probable cause a specific crime had taken place at Mar-a-Lago.

“Search warrants usually come toward the end of an investigation because they require a showing of probable cause and because they tend to tip off the suspect that they are under investigation,” said McQuade, a former Obama-era US attorney.

Asha Rangappa, a former FBI agent and an editor at Just Security, noted on Twitter that the Justice Department’s investigation of key events around January 6 as they relate to Trump is still in its early stages, “my guess is that this is about the [White House] removal of classified documents, which I suspect is a separate investigation and one that likely has been going on for a while.”

She added: “If the crime is mishandling classified docs, the evidence are the docs themselves (and them being at Mar-a-Lago).”

The Washington Post reported earlier this year that Trump took over a dozen boxes containing official presidential records and memorabilia with him when he left office. If he did, his actions could have violated the Presidential Records Act.

The 1970s law requires presidents and White House staff to preserve official documents and communications including gifts received in office, letters, emails, text messages, and social media posts, and turn those items over to the Archives at the end of a president’s term.

Legal battles with DOJ ahead

Monday’s raid on Trump’s home also came as his lawyers warn him that federal investigators probing events related to the January 6, 2021 Capitol riot are closing in on his inner circle. According to CNN, Trump’s attorneys are also in talks with the Justice Department about whether the former president can assert executive privilege with respect to conversations he had with advisors when he was in the White House.

Trump’s lawyers have reportedly cautioned him against communicating with former aides ensnared in Congress’ January 6 investigation and who could become involved in the Justice Department’s criminal probe. They’ve expressed particular concern about former White House chief of staff Mark Meadows, who they believe could be a crucial fact witness in the department’s investigation, CNN said.

The Justice Department, meanwhile, has been readying for a court battle over executive privilege and is said to be preparing a strategy to force Trump’s close advisors to testify about their conversations with him around January 6. And last month, Garland suggested to NBC News that he hasn’t ruled out charging Trump with a crime related to the Capitol riot.

“Look, we pursue justice without fear or favor. We intend to hold everyone, anyone who was criminally responsible for the events surrounding January 6, for any attempt to interfere with the lawful transfer of power from one administration to another, accountable, that’s what we do,” Garland said. “We don’t pay any attention to other issues with respect to that.”

Jan. 6 Defendant Says He Lost His Job, Wife, and Access to Guns

Investors Hoping for a Pivot Should Be Careful What They Wish for: El-Erian

Trump Told His Biracial Ex That Her Smarts Came From Her…

What Happened This Week: Quantifying The Pain Of September,…