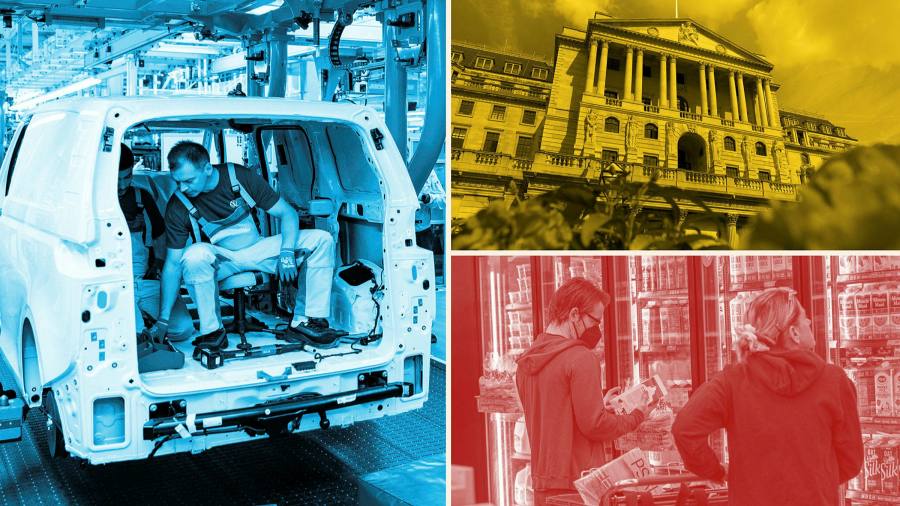 
Did the UK economy shrink in the second quarter?

The UK economy is expected to contract marginally in the second quarter as it heads for a recession of a scale not seen since the 1990s later this year.

Economists polled by Reuters forecast a report on Friday to show output contracted 0.2 per cent between the first and the second quarter. Gross domestic product is forecast to have shrunk by 1.3 per cent between May and June, affected by the Jubilee extra bank holiday and partially reversing May’s expansion.

This follows growth of 0.8 per cent in the first quarter with the slowdown reflecting the impact of the hit to households’ finances from surging energy prices.

Last week, the Bank of England downgraded its UK economic forecast as it increased interest rates by the largest margin in nearly 30 years.

After some growth in the third quarter, the bank said that the UK is projected to enter recession from the fourth quarter of this year and to continue to contract until the end of 2023. After that, growth is expected to be “very weak by historical standards,” the Bank said.

This is a significant downward revision from the May assessment, following the new surge in gas prices that reflected the protracted war in Ukraine and cuts in gas supply to Europe.

“The big picture though is that the economy is still on track to be smaller in 2025 than it was in 2019, before the pandemic,” said Thomas Pugh, economist at the consultancy RSM UK. “The much weaker economy is likely to create more unemployment.” Valentina Romei

Is US core CPI being overlooked?

Headline inflation captures the highly visible food and petrol categories that sting consumers’ pocketbooks when prices soar, but the US core consumer price index — which excludes those volatile categories — is expected to outpace the headline number in July, and may continue to in months to come.

Economists polled by Reuters expect US headline inflation to increase 0.2 per cent month over month from June to July, while core CPI is expected to rise 0.5 per cent. The report is due out on Wednesday.

Derek Holt, head of capital markets economics at Scotiabank, sees core CPI as the figure that may more clearly show how persistent inflation is in the US. He said that the US might have already reached peak inflation in terms of food and fuel, but expects price growth for durable goods and some services to continue rising.

“We’re still in the phase that gets a reopening effect on the more volatile high contact, service prices where people are getting out and about in the summer and travelling more,” he said.

Property and vehicle prices, for example, could continue to rise as food and fuel prices plateau, especially after Opec+ last week agreed to a slight production increase and Ukraine and Russia agreed a deal that allows Ukraine to export its grain into a supply-constrained market.

But heightened tensions between China and Taiwan could disrupt the island’s dominant semiconductor industry and send ripples through the global economy.

“A disruption to Taiwan would strike to the heart of many manufactured durable and big-ticket items and grind a lot of supply chains to a bigger halt,” Holt said, with the caveat that he does not expect that kind of eruption. Jaren Kerr

The eurozone is set for a deceleration in economic activity as rising interest rates and surging food and fuel prices caused by Russia’s war in Ukraine push the region towards recession.

Eurozone industrial production data for June is set to be released on Friday and will show the impact of soaring energy prices and prolonged supply chain disruption on industrial output. The May figure beat analysts’ expectations, with industrial production rising 0.8 per cent on a month-over-month basis, but analysts are now expecting it to flatline in June.

“Activity in the euro area is deteriorating in a broad-based fashion, across sectors and countries,” said Barclays analysts, who expect the bloc to fall into recession by the end of the year.

German manufacturing orders fell in June as the eurozone’s largest economy grappled with supply chain issues and interruptions stemming from the Ukraine war. Analysts and economists broadly expect the region to slip into recession, as business and industrial activity declines and consumer spending slows, squeezed by the cost of living and energy price crisis. Nikou Asgari

Trump Told His Biracial Ex That Her Smarts Came From Her…

What Happened This Week: Quantifying The Pain Of September,…