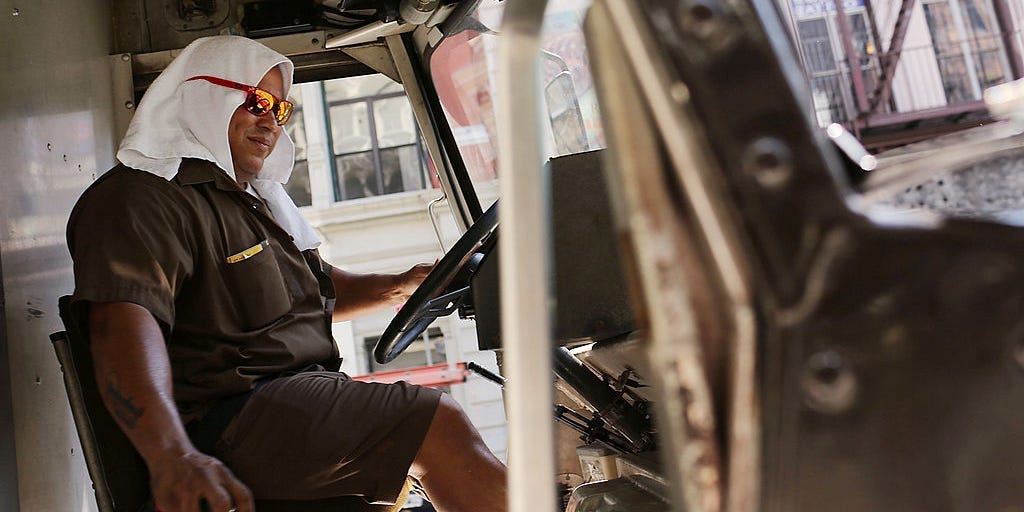 
Some UPS drivers say their trucks are reaching heat levels as high as 120 degrees amid the summer heat wave.

On Tuesday, a Teamsters group shared photos of heat readings from UPS drivers that showed temperatures in the vehicles ranging from 116 to 121 degrees.

“UPS CEOs would never accept working in 120 or 130-degree offices,” Teamsters for a Democratic Union tweeted. “Drivers shouldn’t have to either.”

A spokesperson for the group told Insider the photos came from a Teamsters local union in New York.

A UPS spokesperson told Insider it invests over $260 million per year in safety programs, including ones designed to address hot weather.

“UPS drivers are trained to work outdoors and to manage the effects of hot weather. Preparation, rest, hydration and maintaining good health practices are key to working outdoors,” the spokesperson said. “We also offer our employees multiple ways to share their concerns with us, and we promptly address issues when they are brought to our attention. We never want our employees to continue working to the point that they risk their health or work in an unsafe manner.”

“I had four drivers just last week on Thursday and Friday that had to go to the emergency room because of the heat,” Local 804 President Vincent Perrone told CNBC at the time.

UPS worker conditions have received more attention in recent months. In July, a homeowner shared a video of a UPS driver collapsing outside of his house in Arizona amid triple-digit temperatures. At the time, a UPS spokesperson said the employee was fine and had received assistance from a manager following the incident.

Insider’s Jordan Hart previously reported that a 24-year-old UPS driver, Esteban Chavez, died on the job in June amid a heat wave. An official cause of death has not been publicly released. Chavez was found unconscious in his truck in Pasadena while on the job and later died.

In its full statement to Insider, UPS detailed multiple examples of how it is working to combat the issue.

“We have a program that was developed with input from experts in the field of occupational health and safety that focuses on educating employees about hydration along with nutrition and proper sleep before working in hotter temperatures,” the spokesperson said. “We have morning meetings with drivers all year round, reminding them of forecasted temperatures and encouraging them to be aware of their own health conditions. In the summer, in addition to providing water and ice for employees, we provide regular heat illness and injury prevention training to all operations managers and drivers.

Another example is our innovative safety platform known as the Comprehensive Health and Safety Process (CHSP). The CHSP is a collaboration between local UPS’s hourly employees and management that meets regularly to discuss health and safety, involving our front-line employees in ways to protect the health and safety of their co-workers. There are more than 3,200 CHSP committees in UPS facilities across the country. We have a dedicated team of health and safety professionals who review work practices and promote health awareness.

Our package delivery vehicles make frequent stops, which requires the engine to be turned off and the doors to be opened and closed, about 130 times a day on average. We have studied heat mitigation with our vehicles and integrated forced air systems with venting to create air flow around the driver and cargo areas. We optimize the roof of vehicles to minimize heat in the cargo area, alongside insulating the roof of the cab. We also offer fans to drivers upon request.”

Delivery drivers are one of many worker groups that have been impacted by heat waves in the US. Last year, McDonald’s and Jack in the Box workers staged walk outs after they said they were forced to work in 100-degree temperatures.

Do you have a similar story? Is your job impacted by the summer heat? Do you work as a delivery driver or trucker? Reach out to the reporter from a non-work email at gkay@insider.com