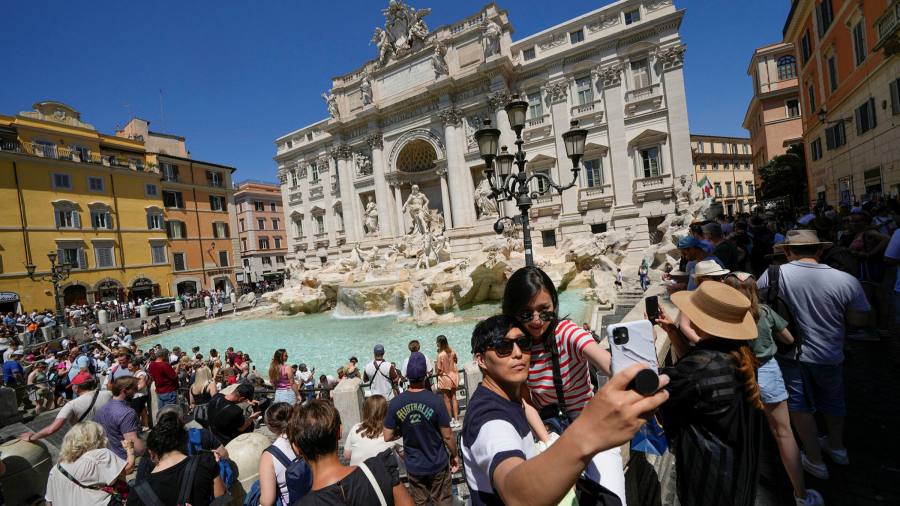 Eurozone health check: growth is up but so is inflation

This article is an onsite version of our Disrupted Times newsletter. Sign up here to get the newsletter sent straight to your inbox three times a week

There were mixed signals on the health of the eurozone economy today as new data showed better than expected growth, but higher than anticipated inflation.

The “flash” estimate for the second quarter showed gross domestic product rose 0.7 per cent, compared with 0.5 per cent in the previous three months, driven by a strong performance from a reanimated tourism sector, especially in Spain (with growth of 1.1 per cent) and Italy (1 per cent).

Economists also welcomed a strengthening of Spain’s labour market, where the unemployment rate has hit its lowest level since 2008. An increase in permanent jobs has followed recent reforms, which aimed to cut the high proportion of the labour force on temporary contracts.

France reported higher than forecast growth of 0.5 per cent, thanks to strong exports and a boost from tourism, tempered by concerns that domestic demand remains flat.

German growth was also flat as household and government spending helped buoy economic activity despite the higher cost of oil and gas imports. Concerns remain however that a further squeeze on gas supplies from Russia could tip the country into a recession.

Eurozone inflation meanwhile sped up from 8.6 per cent in June to 8.9 per cent in July, thanks to a 40 per cent jump in energy prices and a 10 per cent increase in food costs. Stripping out these volatile items left an increase of 4 per cent — still double the ECB’s target rate of 2 per cent.

In Germany, the eurozone’s biggest economy, inflation rose to 8.5 per cent in July from 8.2 per cent in June, fuelled by a 14.8 per cent jump in food prices.

The war in Ukraine — and the gas crisis in particular — means that the outlook for the eurozone in the second half of the year is bleak and looks even bleaker given the turmoil in Italian politics. Consumer confidence is already at its lowest level ever, according to European Commission data.

Today’s inflation figures increase the likelihood that the European Central Bank, which last week raised interest rates for the first time in more than a decade, will announce another 50 basis point increase in September.

New inflation and wage data offered little relief for the US Federal Reserve after it raised interest rates by 0.75 points for the second consecutive month on Wednesday. The core personal consumption expenditures index, the Fed’s preferred measure of inflation, rose 1 per cent in June, lifting the annual rate to 6.8 per cent from 6.3 per cent. Stripping out volatile items such as food and energy left the “core” PCE reading up 4.8 per cent, still more than double the Fed’s target.

It follows yesterday’s news that the US economy shrank for the second quarter in a row by 0.9 per cent on an annualised basis. US economics editor Colby Smith tackles the big question: Is the US in recession? (TLDR: it depends.)

Consumer borrowing in the UK doubled last month, according to the Bank of England, as people resorted to credit cards and other forms of debt to cope with the surging cost of living.

The future of UK economic policy continues to dominate the hustings for the next prime minister. Bookies’ favourite Liz Truss dismissed the idea of further windfall taxes on energy companies, even as Centrica, the owner of British Gas and the country’s biggest energy retailer, reinstated its dividend and reported that operating profits have increased more than fivefold during the energy crisis.

Poor productivity is recognised as one of the main problems holding the UK back. Columnist Tim Harford went to Legoland for inspiration, but bemoaned the fact that its strategy of focusing on the good stuff and “shoving the rest down the memory hole” now appears to be the central plank of government strategy.

US president Joe Biden is set for two significant legislative wins ahead of November’s midterm elections. A $280bn package authorises subsidies for the semiconductor industry while a sweeping bill on tax, climate and social spending also looks set to pass.

Argentina has appointed its third official to take charge of the country’s troubled economy in less than a month. Sergio Massa, a Peronist leader in Congress, will be responsible for a ministry that oversees economic, manufacturing and agricultural policy.

Companies and investors are abandoning most of Latin America’s stock markets, writes LatAm editor Michael Stott, because of a decade of slow growth, weak currencies and bad headlines. At the end of 2012, the region accounted for just 6.4 per cent of MSCI’s global emerging market stock index — less than a third of its weight in 2010.

China’s central bank has proposed an ambitious attempt to revive the country’s debt-stricken property sector with a $148bn bailout for real estate projects. The property downturn played a large role in reducing economic growth to just 0.4 per cent in the second quarter.

Positive results from Big Tech have put stock markets on track for their best month since November 2020. The latest come from Amazon, which reported better than expected revenues and an improved outlook, and from Apple, which recorded growth in revenues despite supply chain problems in China. However, Intel reported an unexpected drop in revenue and reduced its forecasts, sending its shares plunging.

Energy is the other standout sector as companies reap the dividend of soaring prices. ExxonMobil and Chevron both reported record quarterly profits, while Shell broke its profit record for the second quarter in a row and announced a $6bn share buyback.

British Airways parent IAG reported its first profit since the pandemic hit, despite continuing industry-wide disruption. In the US, Southwest recorded record profits as demand surged but warned of problems ahead. JetBlue agreed to buy rival Spirit for $7.6bn to create the fifth-largest US airline, although the deal may face regulatory challenges.

Carmaker results highlighted strong demand at the top end of the market. Renault upgraded its forecasts as it focuses on more expensive models, while Bentley reported increased profits thanks to sales of its luxury vehicles. Stellantis — producer of the Jeep, Alfa Romeo, Peugeot and Fiat brands — was able to shrug off supply problems to increase pricing and report net profits up by a third.

There was less good news for UK car manufacturing, as the global chip shortage means it will not return to producing 1mn vehicles a year until at least 2025 — two years later than expected. Losses have soared at Aston Martin because of supply chain bottlenecks.

Meanwhile, another sector benefiting from the demand from luxury items is the drinks market, where Diageo is profiting from booming sales of “super premium plus” spirits brands such as Don Julio tequila and Bulleit bourbon.

Colgate became the latest large consumer group to announce price rises as it passed on increasing costs to customers. Nestlé yesterday said increasing prices 6.5 per cent had enabled it to raise its sales forecast for the year. Hershey too appears to have got away with raising prices.

The latest wave of Covid cases in England, Wales and Scotland, driven by the BA.5 variant, appears to be in retreat, according to official data. About one in 20 people were infected in the week to July 20, compared with one in 17 the previous week. The data are collected from private households and exclude infections in hospitals or care homes.

There has been a sharp rise in obesity in many countries during the pandemic because of reasons such as disrupted routines and increased stress. Chief data reporter John Burn-Murdoch says it’s time to shift the focus from individual responsibility to how we live and work.

A new report has put a price on the economic impact of long Covid in the UK. On average, sufferers were losing about £1,100 a month in earnings, adding up to £1.5bn in aggregate across the economy. Official data for May showed that about 2mn people had lasting Covid symptoms.

Corporate results this week offered some pointers on the development of Covid vaccines and therapies. Pfizer’s Paxlovid antiviral drug is one of the fastest selling medicines in history, with annual sales this year forecast to hit $22bn. There could however be a surplus of 70mn doses by the end of the year as patient uptake slows.

Strong sales of the Evusheld Covid-19 antibody treatment, which helps protect people who do not respond to vaccines, gave a boost to AstraZeneca in the first half of the year. Sales hit $445mn, almost equalling revenues from the company’s vaccine developed with the University of Oxford. Evusheld sales are however expected to increase, unlike sales of the jab.

The Commonwealth Games, which got under way in Britain’s second city of Birmingham this morning, is being billed as a huge advance for athletes with a disability. Unlike other major events, the para-sport programme is fully integrated, with all medals contributing to the grand total for each country. Here are the BBC’s tips on what to watch.

Thanks for reading Disrupted Times. If this newsletter has been forwarded to you, please sign up here to receive future issues. And please share your feedback with us at disruptedtimes@ft.com. Thank you.