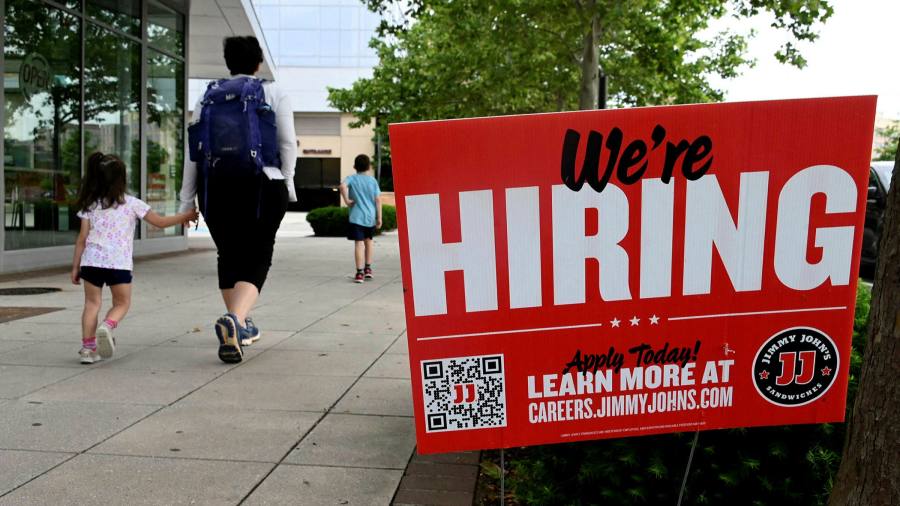 The latest employment cost index (ECI) report, which tracks wages and benefits paid out by US employers, showed total pay for civilian workers during the second quarter increased 1.3 per cent, roughly in line with the 1.4 per cent jump during the first three months of 2022.

For the 12-month period that ended in June, pay-related expenses are up 5.1 per cent, well above the 4.5 per cent annual pace recorded last quarter. Wages in particular are up 5.3 per cent compared with the same time last year, after registering a 1.4 per cent monthly rise.

The data, published by the Bureau of Labor Statistics, were released on Friday alongside the Fed’s preferred inflation gauge, the core personal consumption expenditures (PCE) price index. According to the commerce department, the headline index rose 1 per cent in June, after rising 0.6 per cent in May. That lifted the annual rate to 6.8 per cent, above the 6.3 per cent increase during the previous period.

Once volatile items such as food and energy were stripped out, “core” PCE still rose 0.6 per cent in June, outpacing the previous 0.3 per cent monthly increase. On a year-over-year basis, it is up 4.8 per cent.

The Fed’s target for core PCE is 2 per cent, meaning the US central bank has significantly more progress to make to achieve its goals. As such, interest rate increases are expected well into the second half of 2022, extending what has become the fastest tightening cycle since 1981.

Economists are split as to how the Fed will calibrate the pace of its interest rate adjustments in the months ahead, having implemented a second consecutive 0.75 percentage point rate rise this week to bring the federal funds rate to a new target range of 2.25 per cent to 2.50 per cent. That brings the benchmark policy rate in line with what is broadly considered “long-run neutral” and does not speed up or slow down economic growth when inflation is at 2 per cent.

Fed chair Jay Powell said the central bank would shift to a “meeting-by-meeting” approach in terms of deciding on the cadence of forthcoming rate increases, backing away from the previous tactic of providing specific guidance well in advance. Still, Powell sent signals about what is potentially in store for the next policy meeting in September, noting that “another unusually large rate rise” is possible if warranted by the data.

Officials have previously indicated that they want to see several months of decelerating inflation readings before changing course. As of last month, most expected rates to rise closer to 3.5 per cent by the end of the year with further increases to come in 2023.

Friday’s inflation reports come just one day after new data showed the US economy shrank for a second consecutive quarter, a common criteria for a technical recession. However, given the sustained strength of the labour market, which is still registering healthy monthly jobs growth, most policymakers and economists argue that the conditions for a recession have yet to be met.

Earnings, economic data on the agenda