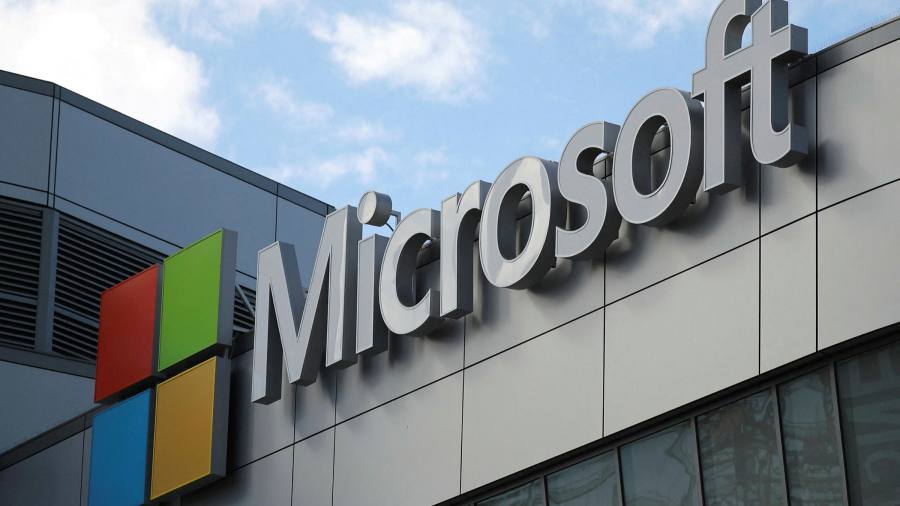 Equity markets rallied after tech groups Microsoft and Google owner Alphabet released results and a confident outlook despite gathering gloom around the prospects for the global economy.

Satya Nadella, Microsoft chief executive, said on a call with analysts that his company had taken market share across its businesses and demand for its cloud services was expected to remain robust as many IT users look for more cost-effective ways of handling their computing.

Alphabet shares added 5 per cent in after-hours trading and Microsoft rose 4 per cent. The positive reaction to the results lifted shares around the world and US futures contracts. Contracts tracking the technology-heavy Nasdaq 100 gained 1.4 per cent while futures in the broader S&P 500 were up 0.9 per cent.

The upbeat comments from the tech sector contrasted sharply with results yesterday from consumer companies, which warned of rising prices and falling demand. Results from Unilever, Coca-Cola and McDonald’s laid bare the impact of global inflation. They came a day after retailer Walmart warned that profits would be lower than expected as inflation weighed on US consumers.

Analysts had been predicting weak results from the tech groups following warnings from smaller rivals Snap and Twitter. They had also warned in advance of the very tough comparisons the companies faced from results a year ago which were boosted by Covid-19 lockdowns and the switch to working from home.

Biden and Xi to hold call as tensions grow over Pelosi visit to Taiwan Joe Biden and Xi Jinping will hold a telephone call tomorrow, according to a US official, as tensions escalate over the planned visit to Taiwan by Nancy Pelosi. The Democratic Speaker of the House of Representatives and second in succession to the presidency plans to visit the island next month. Do you think Pelosi should visit Taiwan? Have your say in our poll.

2. European gas price rise accelerates European gas prices have jumped today after Russia followed through on its threat to make deepening cuts in gas supplies to the region. The European benchmark TTF contract rose 12 per cent, taking its gains for the week to more than a third, after gas flows through the Nord Stream 1 pipeline, which carries energy from Russia to Germany, roughly halved to 20 per cent of capacity.

3. Credit Suisse names new chief Troubled Swiss lender Credit Suisse installed Ulrich Körner as chief executive and announced it plans to scale back investment banking activity as it launched its second strategic review in less than a year. The group also reported a SFr1.2bn loss for the second quarter, far worse than the SFr206mn expected by analysts.

4. BlackRock pulls back support for climate and social resolutions BlackRock’s support for US shareholder proposals on environmental and social issues fell by nearly half in this year’s annual meeting season. The world’s largest money manager said Russia’s invasion of Ukraine had changed the investment calculus and that shareholder proposals were becoming too prescriptive. For more ESG news sign up to the Moral Money newsletter.

5. El Salvador seeks to allay default fears with sovereign bond buyback
The Central American country that last year adopted bitcoin as legal tender said yesterday it planned to buy back $1.6bn of its sovereign bonds in an attempt to allay fears of a default.

Fed interest rate decision The Federal Reserve is expected to further tighten US monetary policy with a second 75 basis-point rate increase, while at least one senior governor backs the Federal Open Market Committee to go even further.

Corporate earnings Meta, owner of Facebook, is the latest Big Tech company to report earnings. It has made changes to its app to compete more aggressively with Chinese-owned TikTok and is reportedly planning to slow hiring. Industrial groups Ford and Boeing also report second-quarter earnings and are expected to share their views on the impact of inflation and supply chain disruptions on their businesses.

Mike Pence squares up to Donald Trump Back-to-back speeches in the US capital were the latest evidence of the simmering feud between the former running mates turned political foes as both eye a bid for the White House in 2024.

Top US regulator fires warning shot Rohit Chopra, director of the Consumer Financial Protection Bureau, has warned that Big Tech’s entry into the buy now, pay later lending business risks undermining competition in the nascent sector and raises questions about the use of customer data.

Memo to Wall Street: don’t touch that delete button! On Wall Street and in Washington no one seems to have thought about the risks of using personal devices for work purposes. Wall Street banks said this month that they expected to pay $200mn apiece for failing to preserve text and WhatsApp conversations on bankers’ personal phones. Separately, the US Department of Homeland Security has opened a criminal probe into the disappearance of texts from Donald Trump’s security detail. This is absurd, writes Brooke Masters.

Can Eutelsat compete in a space race? French satellite operator Eutelsat and money-losing UK start-up OneWeb are going for the moonshot: a merger that stakes their future on challenging Elon Musk’s SpaceX and Jeff Bezos’s Kuiper project. Do they have a chance at disrupting the once-staid space industry?

Josep Borrell: Now is the time to save the Iran nuclear deal The EU high representative for foreign affairs and security policy has put forth a text laying out the best possible deal that, as facilitator of the negotiations, he sees as feasible. In the Financial Times, he explains why it is the best path forward.