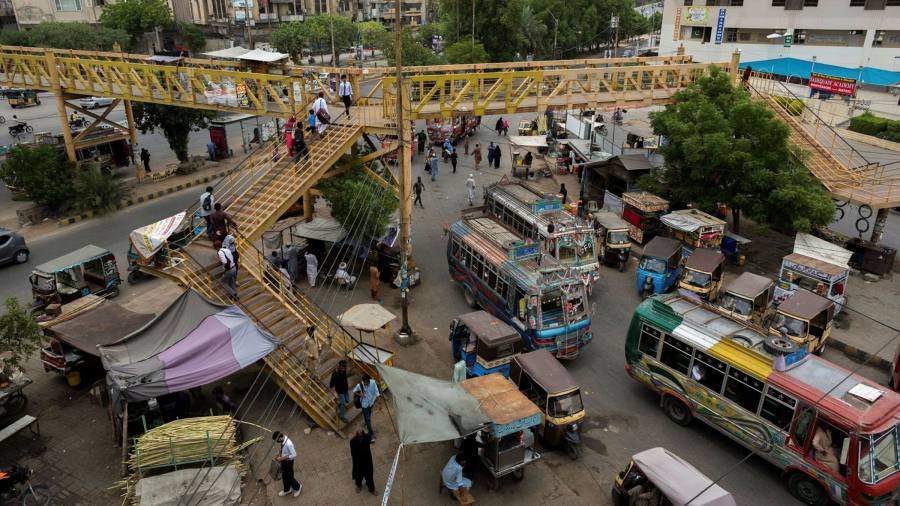 
Pakistan’s central bank governor has rejected market concerns about Islamabad’s worsening liquidity crunch as “overblown” and said he expected the IMF to sign off on $1.3bn of new funding for the cash-strapped Asian country in August.

Murtaza Syed also told the Financial Times that Pakistan was engaged in talks with Middle Eastern countries, such as Saudi Arabia, as well as China “to get a little bit of the extra money that we need” as it contends with rising commodity prices, falling foreign exchange reserves and a depreciating currency.

“On the external debt servicing side, the next 12 months — while they look challenging — are not as dire as I think some people make them out to be,” Syed said. “Especially as we have the cover of the IMF programme during what is going to be a very difficult 12 months globally.”

Sri Lanka’s default on its foreign debt in May has stoked fears over the risk of defaults in other emerging economies.

The Pakistani rupee lost more than 7 per cent of its value against the US dollar last week, the steepest weekly drop since 1998, after a regional poll victory for Imran Khan, who was ousted as prime minister just a few months ago.

Pakistan’s widening current account deficit has drained its foreign exchange reserves, which have fallen by $7bn since February to just over $9bn in July, Syed said, equivalent to a month and a half of imports.

Fitch Ratings revised its outlook for the country to negative from stable last week because of what it called “significant deterioration in Pakistan’s external liquidity position and financing conditions since early 2022”.

However, Syed, who worked for the IMF for 16 years, said Pakistan’s debt vulnerability could not be compared with Sri Lanka’s problems. “Those fears are overblown and in fact, Pakistan is not in that very bad category of countries,” he said.

Unlike Sri Lanka’s tourism-reliant economy, he said, Pakistan “had a pretty good Covid”, with a milder economic contraction and stronger recovery than its smaller neighbour.

While Sri Lanka owes about 40 per cent of its debt to commercial lenders, most of Pakistan’s debt is owed to multilateral institutions and bilateral lenders, he added.

“We have external financing needs of about $34bn in the next 12 months and we have financing already identified because of the IMF programme of over $35bn,” he said. “So we are over-financed, actually.”

Syed said that he expected the next $1.3bn IMF disbursement from its $7bn facility to be approved in August, though this might be complicated by summer holidays. “We are trying to push for it sooner rather than later,” he said.

An analyst said that although Sri Lanka’s economic situation was worse than Pakistan’s, in Colombo, political risk was waning but in Islamabad it was deteriorating.

“In Sri Lanka, the crisis is so immediate and so bad, there is broad consensus in the political class on what has to happen,” said Eurasia Group’s Peter Mumford.

“If Sharif or Khan is prime minister, there will be differences in fiscal policies that would affect the viability of an IMF programme.”

Khan’s upset victory last week in Punjab, the country’s largest province, has raised the likelihood of an early election that could unseat Shehbaz Sharif’s government.

However, Syed said that his “strong baseline” was that the Sharif government would remain in power. Even in the “hypothetical” event of an early election, he added, the IMF had a history of proceeding with programmes with caretaker governments.

Gas prices are down, but commodities still control inflation’s future