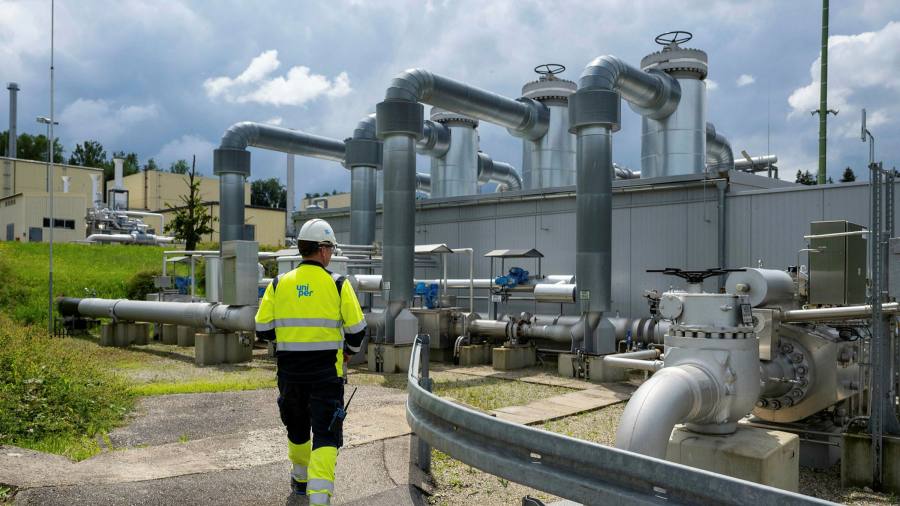 
The IMF has slashed its global growth forecasts and raised its projections for inflation, warning that the risks to the economic outlook are “overwhelmingly tilted to the downside”.

The downgraded estimates, released on Tuesday, come as the world grapples with the fallout from Russia’s invasion of Ukraine, prolonged disruptions caused by the pandemic and rapidly tightening financial conditions, with central banks seeking to contain soaring prices.

The fund now expects growth in gross domestic product to slow to 3.2 per cent in 2022, down 0.4 percentage points from its April estimate and roughly half the pace of last year’s expansion. In 2023, global growth is set to weaken further to 2.9 per cent. Just three months ago, that estimate was 0.7 percentage points higher.

Global inflation is likely to intensify, with the IMF raising its forecasts for this year and next by nearly a full percentage point to 8.3 per cent and 5.7 per cent, respectively.

The multilateral lender said the economic outlook had become both much more gloomy, and “extraordinarily uncertain”, with inflation at historic peaks and challenges to growth increasing.

Pierre-Olivier Gourinchas, the IMF’s top economist, warned in an interview it would also be an environment that tests the “mettle” of central banks around the world to continue raising interest rates in a bid to restore price stability even if the economy was slowing,

The risk of a recession is “particularly prominent” in 2023, because by next year growth is expected to bottom out in several countries, stockpiles of savings amassed during the pandemic will have shrunk, and “even small shocks could cause economies to stall”.

One “plausible” scenario the fund mapped out is a sharp reduction in Russian energy exports, including a full cessation of the country’s gas supply to Europe, which would further knock back growth and ignite new price pressures.

The baseline outlook for Germany, the eurozone’s largest economy and a country acutely exposed to a Russian gas cut off, is already bleak, with the fund now expecting growth of 1.2 per cent this year and just 0.8 per cent in 2023 — a figure almost two percentage points lower than estimated back in April.

After a 3.2 per cent expansion slated for 2022, the UK is projected to grow just 0.5 per cent next year, the lowest rate across the G7.

But Gourinchas stopped short of labelling the forthcoming economic environment as “stagflationary”, akin to the 1970s, maintaining that central banks have much more credibility now than they did then. He said however that “the risk that we may have a global recession has gone up [and] inflation will remain more persistent than we anticipated”.

Triggering the more pessimistic growth forecasts were downgrades across the world’s largest economies.

Hindered by extensive Covid-19 lockdowns, China’s economy is set to expand just 3.3 per cent this year, 1.1 percentage point less than anticipated in April and set to be the lowest growth in more than four decades, aside from the 2020 shock.

For the US, last year’s 5.7 per cent expansion is forecast to more than halve to 2.3 per cent in 2022, before dipping further the following year to just 1 per cent, as soaring inflation eats away at households’ ability to buy goods and services, consumption ebbs and the Federal Reserve’s historically aggressive monetary tightening campaign begins to bite.

Compared with April’s projections, the new estimates are each more than 1 percentage point lower.

Once adjusted for inflation, “real” GDP growth in the US of only 0.6 per cent on a year-over-year basis is expected in the fourth quarter of 2023. “It doesn’t take much to knock the economy off into something that you might call a technical recession,” Gourinchas said.

He added that emerging markets had become a chief concern, as the Fed’s tightening cycle pushed up borrowing costs globally. While “disorderly” financial market conditions had not yet taken root, he said, the big wild card was just how much additional pressure economies could withstand.

Emerging markets were likely to come under even more intense pressure should the fund’s alternative scenario of a sharp drop in Russia’s oil and gas exports come to pass, with inflation expectations mounting and central banks forced to tighten monetary policy even more aggressively.

Under those circumstances, global growth is forecast to decline in 2022 and 2023 to just 2.6 per cent and 2 per cent, respectively. According to the fund, it has fallen below 2 per cent just five times since the 1970s.

The euro area, already set for much lower growth this year than previously forecast, would also be disproportionately affected. The IMF had already revised lower its projections to a 2.6 per cent expansion in 2022 and 1.2 per cent in 2023.

A cessation of Russian gas exports could slash another 1.3 percentage points from the region’s 2023 growth forecast, resulting in “near-zero regional growth”.

That is likely to create more problems for the European Central Bank, already facing challenges including how to raise interest rates to fight inflation without causing a new eurozone debt crisis.

Gourinchas said a bond-buying tool unveiled by the ECB last week could potentially have a “very large soothing effect” on markets but added it would be a “delicate exercise” to pull off.

Earnings, Fed meeting on the agenda