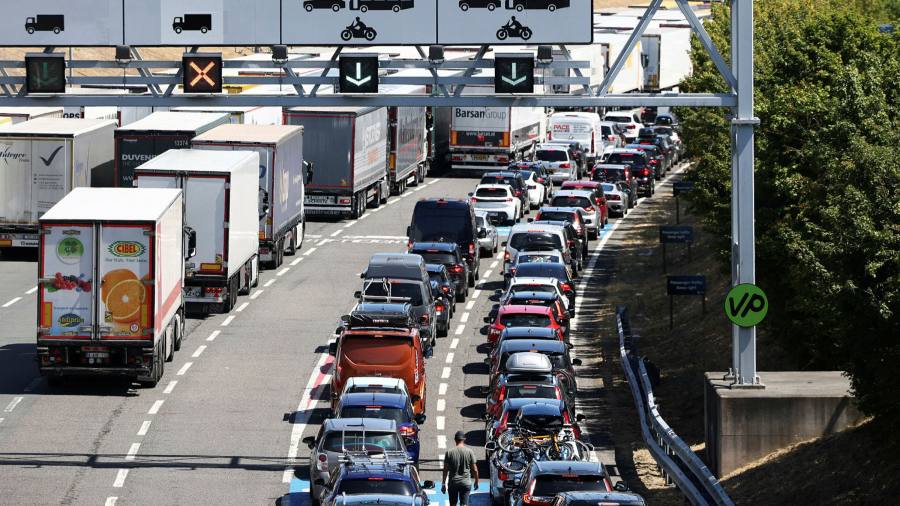 Nowhere is the term “disruption” more apt than when discussing the UK and European travel industry as it struggles to cope with the surge in demand in the first restriction-free summer of the pandemic era.

UK motorists have had a torrid time struggling to board trains or ferries to France as a combination of post-Brexit border checks and staff shortages led to a “critical incident” being declared at Dover on Friday as traffic backed up on the M20 motorway.

The port blamed inadequate staffing on the French side, while the French pointed out that delays were inevitable given the UK’s choice of a hard Brexit. It has led to processing time at the border rising from 58 seconds per car pre-Brexit to 90 seconds today. And as problems at Dover eased, focus has switched to the port of Folkestone, the new “hotspot of holiday hell”.

Flying has become equally burdensome. Although there have also been problems in the US, it is Europe that has become the epicentre of disruption this summer as staff shortages hit airlines, airports and ground services such as baggage handling. Today Lufthansa ground staff announced a 26-hour “warning strike” over wages this week after pay talks broke down.

There are some signs that the disruption is hitting people’s appetite for travel, with demand for flying falling among some of Europe’s largest carriers, according to data published last week. UK regulators meanwhile have warned about “harmful practices” in how they treat passengers, threatening action if they did not handle flight disruption more effectively.

The lingering threat of Covid remains, as do the uncertainties from the war in Ukraine. Ryanair warned today that the recovery was “strong but still fragile,” even as it reported a return to profits.

Europe’s biggest budget airline also warned that “the days of €9.99 fares are probably coming to an end” after fuel prices rocketed from $40 to over $100 a barrel.

Train passengers in the UK have also suffered from a combination of strikes — the next action is scheduled for Wednesday — and railways unable to cope with extreme heat.

But for those venturing abroad and who manage to reach their holiday destination intact, and with all their luggage in tow, the services they are normally accustomed to may well be in short supply.

The surge in demand from holidaymakers has left much of the European tourist industry struggling to cope, especially in the southern eurozone, where hotels, restaurants and tour operators have more than 40,000 unfilled vacancies. The downbeat mood was captured by the Portuguese Hoteliers Association as it echoed the sentiments of Ryanair: “The era of fast, frequent and cheap holidays is over.”

Fears of a German recession increased as the Ifo Institute’s closely watched indicator of business confidence fell to its lowest in more than two years. Gross domestic product figures for the second quarter are out on Friday and are expected to show growth of just 0.1 per cent, following 0.2 per cent in the first three months of the year.

Jim O’Neill, former chief economist at Goldman Sachs and UK Treasury minister, wrote in the FT of the need for a coherent economic strategy from the two contenders to be the country’s next prime minister, especially on improving productivity.

The UK’s financial regulator warned of the dangers of consumers cutting back on insurance as the cost of living squeeze intensified, calling for firms to provide more support so customers are not left without a safety net. The author of a review into reform of capital markets warned London could lose ground to rival cities in the EU and US.

Brussels’ attempts to cut gas demand across the EU continue to be watered down, with the “mother of all opt-outs” for southern and eastern member states. The plan is being discussed by EU ambassadors today ahead of an emergency meeting of energy ministers tomorrow. European gas prices are expected to remain high for years to come even after flows from Russia resumed last week.

On Wednesday, the US Federal Reserve is set to raise its benchmark interest rate by 0.75 percentage points for the second consecutive month. The strategy beyond that is less certain, writes US economics editor Colby Smith.

Confidence in the Argentine economy is vanishing as the government struggles with political infighting, increasing domestic debt and inflation surging towards 90 per cent. Argentines are rushing to the black market to ditch their rapidly devaluing pesos for US dollars. In Brazil, the presidential election battle kicked up a gear with the launch of incumbent Jair Bolsonaro’s campaign.

Lower interest rates on long-term deposits at some of China’s biggest banks are pointing to a sustained slowdown in growth. Beijing’s zero-Covid policy and housing market turmoil were undermining the post-lockdown economy, according to one economist.

Russian foreign minister Sergei Lavrov is touring Africa to fend off accusations that Russia is “exporting hunger” by its actions in Ukraine.

Billions of dollars have been lost from second-quarter sales of US companies because of the strength of the dollar. The currency shock is particularly bad for groups with a substantial portion of their business outside the US. US corporate finance and deals editor James Fontanella-Khan says Wall Street bankers need to prepare for some cost-cutting as new economic realities take hold.

Swiss wealth manager Julius Baer reported a 26 per drop in first-half profits to Sfr450mn ($468mn) amid “one of the worst six-month periods for capital markets in decades”.

The return of European travel, alongside increasing customer numbers and price rises helped boost growth at Vodafone. The telecoms company said it was on track to hit its full-year earnings target of between €15bn and €15.5bn.

The London office market is undergoing the biggest “reset” since the financial crisis, according to BNP Paribas. After a jump in the first quarter, buyers have retreated or are pushing for bigger discounts as the economic outlook darkens.

Consumer goods groups are suffering from shoppers trading down to supermarket own-brands as the cost of living crisis bites. Although commodity prices have fallen from this year’s highs, the big consumer groups such as Pepsi are still passing on extra costs in the form of higher prices.

The World of Work

The UK is unique in developed countries in the number of working age people neither employed nor seeking work rising in almost every quarter since the pandemic began. The main reason for this stalled labour recovery, writes John Burn-Murdoch, is chronic illness.

Two years of pandemic have severely limited our ability to network, writes entrepreneur Shola Asante, but the skill is absolutely essential for those aiming for the top.

Women often label natural, reasonable self-doubt as “imposter syndrome” when it’s just part of regular professional life, writes Viv Groskop. “We are decades into universal suffrage, education and literacy and yet so much data illustrates our desperation to cling on to weird medieval gender attitudes that are reflected across society and, most markedly, wherever there is power, status and money,” she says.

The three stages of criticism generally consist of 1) cursing your critic 2) lamenting your situation 3) resolving to make things better. But it is possible to skip straight to stage three by getting better at giving — and receiving — constructive criticism, writes Esther Bintliff.

The pandemic-induced “great resignation”, where employees previously stuck in their offices were spurred to reconsider their career plans, is finally catching on in Japan with an explosion of social enterprises — for-profit organisations created to benefit the community.

Fancy a weekend in a flying saucer? How about a week in a yellow submarine? Or inside a six tonne potato? Airbnb’s new OMG! feature showcases the weirdest places to stay on its network and is a celebration of that oft-dismissed architectural device: the folly.

How To Learn About Bitcoin Using Video Tutorials – Bitcoin Magazine