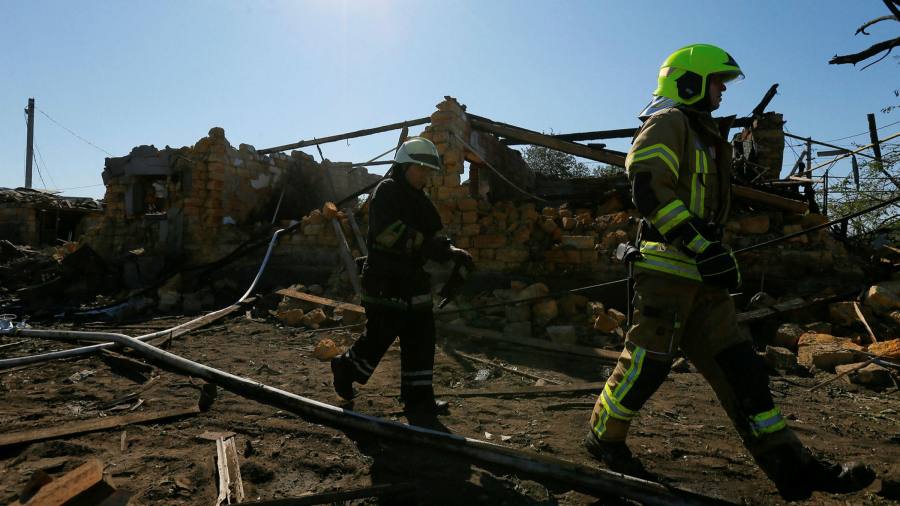 
Ukraine accused Russia of firing missiles at its key grain exporting port of Odesa on Saturday, a day after Moscow signed a deal allowing Kyiv to resume grain exports in a bid to alleviate the growing global food crisis.

Two Kalibr cruise missiles hit Odesa’s port and two others were shot down by Ukrainian air defences, according to Serhiy Bratchuk, a spokesman for Ukraine’s southern military command.

Videos posted on social media showed a large plume of smoke billowing from the port. Oleksiy Honcharenko, a Ukrainian member of parliament, wrote on messaging app Telegram that at least six explosions were heard and an unspecified number of people were wounded.

On Friday Russia’s defence minister signed a deal brokered by the UN and Turkey agreeing to let Kyiv export millions of tonnes of grain from its Black Sea ports.

Ukraine said Saturday’s strikes violated Russia’s promise not to attack its grain export infrastructure and called the viability of Friday’s deal into question.

No matter what Russia says and promises, it will find ways not to implement it

Oleg Nikolenko, Ukraine’s foreign ministry spokesman, said Russia would “bear full responsibility for the deepening of the global food crisis” if it did not uphold its promises not to attack the port. He accused Putin of “spit[ting] in the face” of UN secretary-general António Guterres and Turkish president Recep Tayyip Erdoğan, who brokered the talks.

Zelenskyy told a visiting US congressional delegation that the attack “proves only one thing: no matter what Russia says and promises, it will find ways not to implement it”, according to his website.

The deal, which Guterres hailed as a “beacon of hope”, was the first major agreement struck between the two sides in the five-month conflict.

The blockade has choked off a crucial economic lifeline for Ukraine and left an estimated 22mn tonnes of wheat, corn and other grains stranded in silos, with devastating effects on global food prices and poverty levels.

As many as 47mn people, particularly in sub-Saharan Africa, are at risk of acute hunger because of the conflict, according to the World Food Programme.

“Yesterday, all parties made clear commitments on the global stage to ensure the safe movement of Ukrainian grain and related products to global markets,” the statement said.

“These products are desperately needed to address the global food crisis and ease the suffering of millions of people in need around the globe. Full implementation by the Russian Federation, Ukraine and Turkey is imperative.”

Hulusi Akar, Turkey’s defence minister, said his Ukrainian counterpart informed him that one Russian missile had hit a grain silo at the port but that cargo loading facilities were unaffected and activities at the port continued. He also said that Russian officials had denied to him that they had anything to do with the attack.

“The fact that this incident took place right after the agreement we made yesterday regarding the grain shipment has really worried us, and we are disturbed by this. However, we continue to fulfil our responsibilities in the agreement,” Akar told the state news agency Anadolu.

Akar added that Russian, Ukrainian and UN representatives have already begun to work together at a joint co-ordination centre in Turkey and he remained hopeful that grain shipments would start quickly.

Billionaire oligarch Roman Abramovich, who sold Chelsea Football Club in May after the UK and EU sanctioned him, attended the signing ceremony and played a key role in the deal, according to three people familiar with the matter.

Abramovich helped facilitate peace talks between Russia and Ukraine with Putin’s blessing before they collapsed in April.

He visited Kyiv several times, where he met Ukrainian president Volodymyr Zelenskyy, and has since played a role brokering prisoner exchanges and opening evacuation routes for civilians, according to people familiar with the matter.

“He was key to it all. He’s one of the only people close to Putin to whom the Ukrainians talk,” one of the people said. A Ukrainian official said Abramovich’s role had become more prominent since the peace talks stalled in the spring.

“Somehow he is part of the circle dealing with sensitive issues between Ukraine and Russia,” the official said. “He is on the list of trusted people who can be in any talks.”

Dmitry Peskov, Putin’s spokesman, denied that Abramovich had played a crucial role in the talks.

Elsewhere in Ukraine, officials in the port city of Mykolayiv reported being hit by six Russian projectiles on Saturday. None of them hit port infrastructure and its facilities are not part of the agreement that was brokered in Turkey.

The Kremlin, Turkey’s foreign ministry, and a spokesperson for Abramovich did not immediately respond to requests for comment.