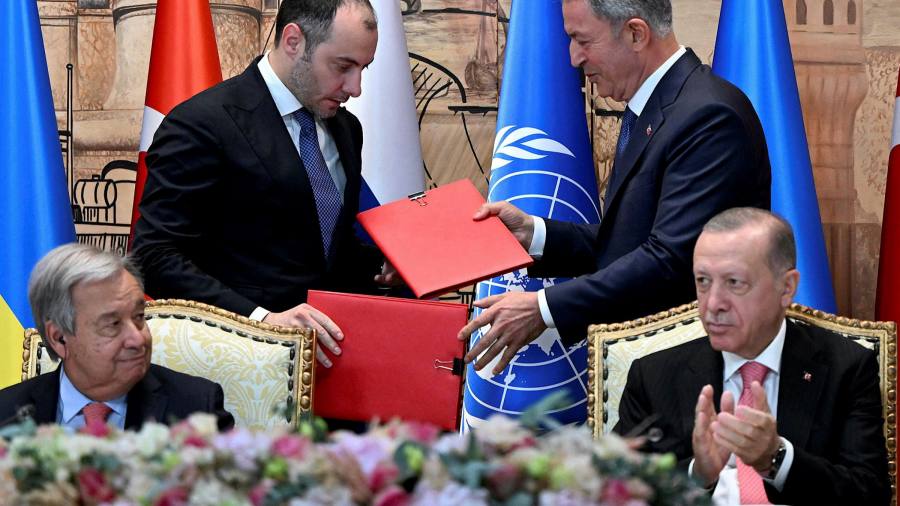 
Kyiv and Moscow have struck a deal aimed at averting a global food crisis, agreeing a “de facto ceasefire” on cargo ships that will collect millions of tonnes of stranded grain from Ukrainian ports.

At a signing ceremony on Friday in Istanbul, UN secretary-general António Guterres hailed it as a “beacon of hope on the Black Sea”.

But with fighting continuing in Ukraine and deep mistrust between the two sides, diplomats warned that upholding the deal would present huge challenges

Guterres said the agreement would “bring relief for developing countries on the edge of bankruptcy and the most vulnerable people on the edge of famine” by helping to stabilise global food prices.

Turkey’s president Recep Tayyip Erdoğan, who played a central role in negotiating the deal and whose military will help monitor Ukrainian ports, said his country was “proud to be instrumental in an initiative that will play a major role in solving the global food crisis”.

Under the deal, which aims to restore grain shipments to prewar levels in the coming weeks, Ukraine and Russia have agreed not to attack merchant vessels, civilian vessels or port facilities covered by the agreement, according to a senior UN official.

It represented a “de facto ceasefire”, the official said, but added: “It doesn’t mean to say that parts of those ports which are not engaged in this mission are protected.”

It is unclear how the deal will be enforced and what will happen if either side is accused of violating it.

Turkey, a Nato member with close ties to Kyiv and Moscow, has agreed to send monitors to the ports along with UN representatives. But a senior Ukrainian official involved in the talks said Kyiv still had serious reservations. Without a binding mechanism to hold Russia to its commitments, the other parties essentially have to accept Moscow’s words, the official said. “[There is] no enforcement, just promises.”

Mykhailo Podolyak, an adviser to Ukrainian president Volodymyr Zelenskyy, said in a tweet that there would be an “immediate military response” in the event of Russian “provocations” affecting the grain supplies.

Victoria Nuland, one of the US state department’s top diplomats, said she believed Russia was forced to agree the grain deal because it was facing criticism from developing countries, which the Kremlin has been courting diplomatically since the start of its war in Ukraine.

“Russia ultimately felt the hot breath of global opprobrium,” Nuland told the Aspen Security Forum on Friday. “They were losing the global south.”

Nuland, under-secretary for political affairs, criticised Moscow for taking so long to reach the deal, saying it should have been reached quickly rather than after nearly two months of negotiations.

She said the decision to agree a deal was also motivated by the Kremlin’s need to renew its own food exports, noting its has been “hard for them to get shippers and insurers to deliver their own food” and “they need the money”.

John Kirby, a spokesman for the US National Security Council, said Washington expects the deal to be implemented “swiftly”, and called on Russia to follow through.

He said the US was not part of arranging the deal. Kirby voiced scepticism that Russia would fully comply. “We’re hopeful that this deal is going to make a difference, but we’re clear-eyed about it.”

A second, parallel agreement also negotiated by the UN seeks to unblock the export of Russian food and fertiliser to global markets in an unwritten quid pro quo for president Vladimir Putin aimed at winning his consent for the grain deal.

The Kremlin had said it wanted the lifting of sanctions against insuring its exports, giving ships port access, and processing payments.

The US and EU never specifically banned Russia’s exports, and the clarifications on western sanctions against food and fertiliser they issued this week are not part of the UN-brokered deal.

An EU official argued the deal put constraints on Russia’s future military operations in the Black Sea, protected Odesa from attack, and gave Ukraine an economic lifeline as it teeters on the brink of default.

Kyiv is worried that the west has made too many concessions to Russia without extracting binding commitments in return. “It is more like a personal deal between the participants,” said an official close to the talks.

Ukraine nonetheless felt it had little choice, the official added, as time runs out for it to export last year’s harvest before it rots. The war has already severely hampered Ukraine’s planting cycles and future harvests.

Before Putin’s invasion of Ukraine in February, the country was the world’s fifth-largest exporter of wheat and a crucial supplier to countries in the Middle East and Africa.

The blockade of its ports has left an estimated 22mn tonnes of wheat, corn and other grains stranded in silos, with devastating effects on global food prices and poverty levels. The World Food Programme has warned that the conflict is expected to push an additional 47mn people globally into “acute hunger”, with the steepest increase in starvation rates in sub-Saharan Africa.

UN officials who helped broker the grain deal say they expect it to be a commercial operation, rather than a military one, with Ukrainian pilot boats helping cargo vessels to safely navigate the Ukrainian coastline after collecting grain from the ports of Odesa, Chornomorsk and Yuzhny.

While a senior UN official said it would take “a few weeks” for full implementation, he added that some initial shipments might happen sooner to “show that it can work, that it can be done”.

The aim was to return to prewar export levels of about 5mn tonnes of grain a month, he said.

Key elements of the deal

Looks like (some) neobanks will be OK after all – TechCrunch