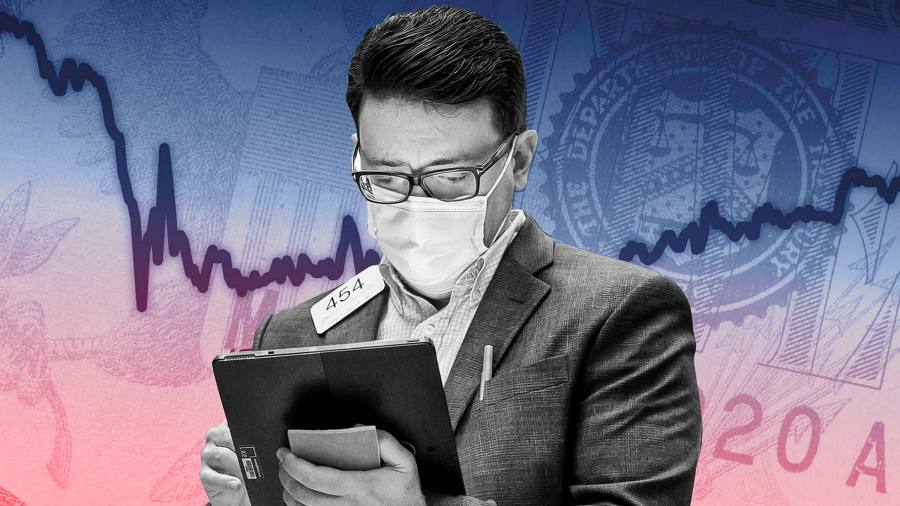 Good morning. Ethan here; Rob’s back on Monday. Another modest stock bounce yesterday. Less modest was Tesla, rocketing up 10 per cent after less-bad-than-feared earnings on Wednesday. The company also sold most of its bitcoin at a fat loss. Somehow Tesla is worse at trading crypto than your nephew.

Today, why forward guidance had to go, and a look at leveraged loans. Hope everyone is staying cool out there. Email us: robert.armstrong@ft.com and ethan.wu@ft.com.

After the Federal Reserve’s 75 basis point hike in June, we wrote that it’s stupid to do bad policy just because you said you would. The Fed had telegraphed 50bp, but inflation expectations data came in hot, so it had to pivot.

The Fed is not the only central bank leaving predictability behind. Last week, the Bank of Canada delivered a 100bp rate increase, to markets’ surprise. And then, yesterday, the European Central Bank raised rates 50bp, tossing its June guidance for 25bp. This was the ECB’s reasoning, from Reuters:

We decided to go for a 50 basis point (rate increase) in June and therefore the combined forward guidance that existed for September is no longer applicable. From now on, we will take our monetary policy decisions on a data-dependent basis — we will operate month by month and step by step . . .

We debated internally within the Governing Council about the pros and cons of sticking to the signalled 25 basis point (rise) of July which entailed the other forward guidance that we gave in respect of September, and the two of them were clearly a package. And . . . we decided on balance that it was appropriate to take a larger step towards exiting from negative interest rates.

The ECB thought about whether its previous 25bp pledge made sense, and decided, no, it didn’t. In so doing, the ECB killed forward guidance, marking “a profound shift in the central bank’s communication strategy”, as one analyst wrote on Thursday.

With rates stuck near zero, the idea of forward guidance was to give central banks an additional stimulus tool, jawboning markets into pricing longer-term rates lower. In a calm economy, whether this makes sense is debatable. But it is pointless in one where central banks are raising rates to contain inflation that continues to surprise to the upside. How can they ever know where rates should be, until the moment that they must decide? Ditching forward guidance is less a profound shift in policy than a policy reaction to the profound shifts that have already happened in the economy.

A theme we’ve been hitting on in recent days is that everyone is expecting things to get worse soon, but current conditions on the ground are just fine. One more market where that’s happening: leveraged loans.

These are bank loans to below-investment grade companies, often used to finance M&A. What makes them interesting is that they are floating rate, a built-in hedge for duration risk. Earlier this year, as interest rate expectations started to rise, this property made leveraged loans some of the best performing assets out there, especially compared to fixed-rate bonds.

But duration risk is not the only worry. Credit risk matters too. The sorts of companies that take out leveraged loans tend to have weaker balance sheets, and as such are vulnerable to a Fed-induced recession, or even just a slowdown. A slowing economy plus floating-rate loan payments rising could hurt. Issuers would face rising debt-service costs just as business gets worse.

So investors are bracing for recession. Since May, a popular leveraged loan return index has fallen nearly 5 per cent, on par with declines in the high-yield bond market. JPMorgan is offloading leveraged loans at 89 cents on the dollar. Earlier in July, Bloomberg reported that one $500mn deal is being offered at 85 cents, the steepest discount so far in 2022. Issuance is weak and demand is falling. The near-term fear is that a wave of credit downgrades is coming.

There are virtually no defaults among leveraged loan issuers, for now.

How high will defaults go? Analysts at BNP Paribas calculated in June that market conditions imply a 2 per cent default rate by mid-2023. Many forecasters expect something similar. That is gentle stuff by historical standards; the long-term average default rate is 3 per cent. And as you can see in the chart above, the past three recessions coincided with much higher default rates — north of 8 per cent. Even the Covid-19 recession, with its accompanying flood of government liquidity, saw default rates nearing 5 per cent.

Leveraged loans investors, then, are hedging but clearly not panicking. There are two familiar reasons why, Jon Palmer and Nick Kraemer of S&P told Unhedged. One is how resilient the consumption remains, keeping borrowers’ revenues healthy despite increasing margin pressures. Second is the balance sheet buffers accumulated during Covid. Borrowers seized on uber-loose financial conditions to lock in low rates with long maturities. Palmer and Kraemer think it’s probably enough to carry many borrowers through a shallow recession.

As leveraged loans sell at discounts, some are spotting opportunities. John Kline, who runs the direct lending and syndicated loans business at New Mountain Capital, pointed out to us that even if defaults spike in leveraged loans (or elsewhere in credit), a discriminating investor can stay exposed without taking on tons of credit risk. This is because defaults are more concentrated in cyclical industries with volatile cash flows, but managers of collateralised loan obligations (who bundle together leveraged loans) often have mandates forcing them to hold a diversified set of businesses, including cyclically sensitive ones. Kline says investing in sectors with more predictable revenue can give you an edge.

(This is much easier for a private credit firm than an individual investor. The most accessible vehicles holding leveraged loans are just trying to capture the floating-rate universe, not pick winning industries.)

It is always worth reiterating that risks could be building sight unseen. As S&P’s Kraemer wrote in a recent note, the proportion of speculative-grade credit sitting at the tenuous B- rating has bulged, driven by leveraged loan issuance. Under low interest rates, yield-chasing incentivised lower-quality companies to issue leveraged loans, fuelling a boom in CLOs that in turn stimulated more demand for leveraged loans.

Kraemer thinks rising rates and recession fears could “test” leveraged loan issuers with the “potential to slow” this feedback loop. Others don’t put it so politely. As Dan Zwirn of Arena Investors told us in March:

[CLOs] will keep getting printed, and keep hungering for more debt, and keep creating a perception of ready and able refinancing, until they don’t, at which point it will all spiral backward the other way.

Markets, by contrast, are hoping for a soft landing.

Neom, the desert megacity planned by Saudi Crown Prince Mohammed bin Salman, is weird: “elevators that somehow fly through the sky, an urban spaceport, and buildings shaped like a double helix, a falcon’s outstretched wings, and a flower in bloom. The chosen site in Saudi Arabia’s far north-west . . . has summer temperatures over 100F and almost no fresh water.”