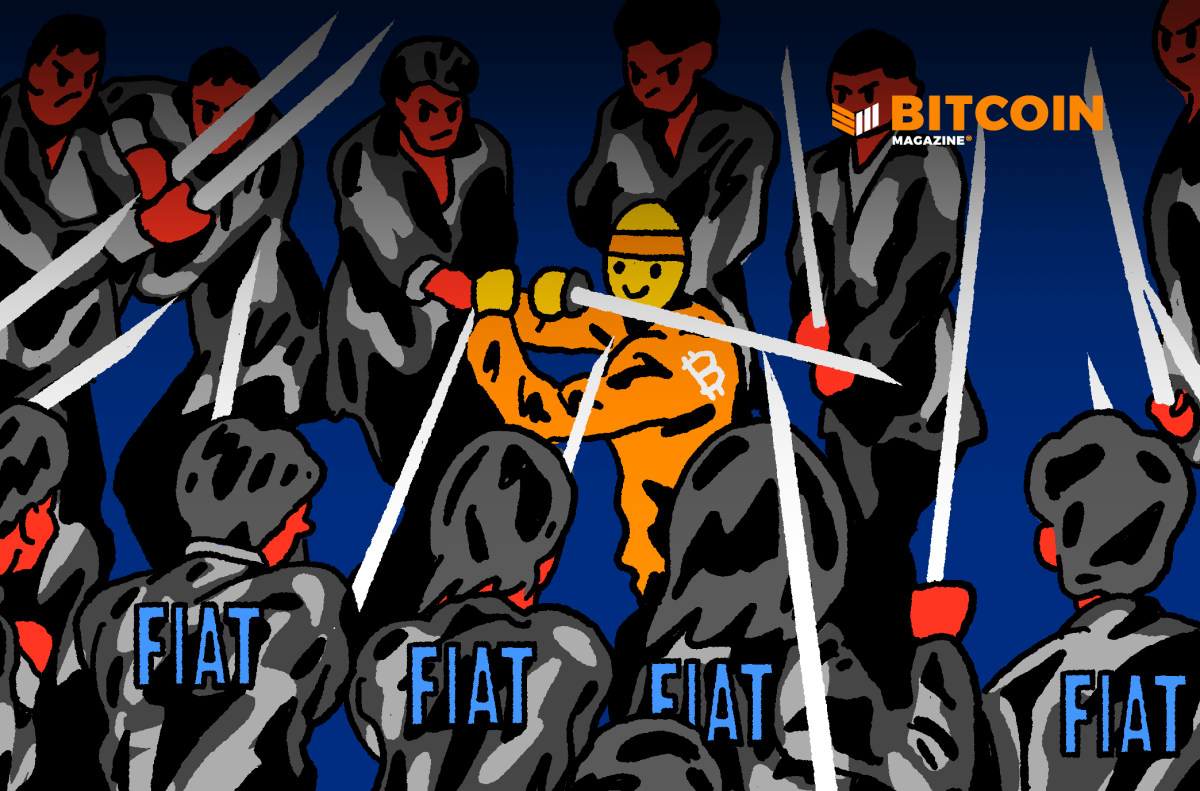 This is an opinion editorial by Nozomi Hayase, a contributor at Bitcoin Magazine.

Recently, prominent venture capitalist, Nic Carter of Castle Island Ventures, came under scrutiny on Bitcoin Twitter. He was piled on by Bitcoiners over controversy involving his firm’s investment in a company called Dynamic that uses a Web3 wallet platform.

In response to their outrage, Carter wrote an article titled “Setting the Record Straight. Or: A Eulogy for Bitcoin Maximalism.” There, he criticized Bitcoin Maximalism as an ideology and asserted that a small group of people who are wrapped around it, impregnated the Bitcoin space with an awful sickness. But is this true? What is Bitcoin Maximalism?

Pete Rizzo, an editor for Bitcoin Magazine, wrote an excellent article tackling this question. He analyzed how the narrative evolving around Bitcoin Maximalists is a cultural war. This narrative is the legacy system’s attempt to co-opt Bitcoin’s new monetary system that diverges from the speculative Wall Street casino economy.

Rizzo roughly defined Bitcoin Maximalists as a group that believes bitcoin is a computer science invention and is the only cryptocurrency that is decentralized. This is the critical value proposition that makes Bitcoin the world’s first non-state monetary system, and that is what differentiates it from all other cryptocurrencies.

Those who recognize Bitcoin’s special property known as proof of work, have become an ardent supporter of this technology. They enthusiastically speak about its significance regularly. Statements made often have the following themes:

“Bitcoin is the hardest money that has ever been created.”

“Bitcoin could end the Federal Reserve and stop their insidious money printing that steals our hard earned value through taxation and inflation.”

“It will deliver humanity from the evil of the central banks.”

With a passion that accompanies religious zest and fervor, Bitcoin Maximalists go around spreading their message in hopes of orange-pilling their no-coiner families and friends. Just like Jesus Christ’s apostles who were challenged by those who do not want to worship Jesus, Bitcoin evangelism is also met with indifference and opposition.

From early on in its development, Bitcoin attracted detractors and hatred. From economists and bankers to policymakers, those who are entrenched in the legacy system saw it as a threat to their existence. They criticized Bitcoin with sensational media headlines depicting it as a Ponzi scheme and “too volatile to be a store of value.”

Die-hard Bitcoin devotees took their missionary work to another level. They began to actively defend the protocol’s core values. Slowly, Bitcoin Maximalism has emerged with sets of moral principles, like the way of the peaceful warrior.

In exploring this moral code, I will turn to Dr. Martin Luther King Jr. and the formula he put forth to engage people in the struggle for civil rights. King didn’t live long enough to see the coming of Bitcoin, but if he were alive today, I think he would be a natural ally with Bitcoiners because he was fighting against the injustice and oppression inherent in the U.S. petrodollar, imperialist system. He would recognize and embrace the technology’s revolutionary power that could abolish debt-slavery and financial apartheid, eradicating poverty and war.

In his fight for freedom, King drew inspiration from the gospel and used its guidance to overcome adversaries that confronted him. King looked into Jesus’ teachings that he gave to his disciples. It is summed up in one sentence as follows:

“Be ye therefore wise as serpents, and harmless as doves.” — Matthew 10:16

In one of his sermons, King decoded this wisdom that combines seemingly opposing characteristics. By blending the toughness of the serpent and the softness of the dove, he created a formula for action, which he called “A tough mind and a tender heart.”

Let’s first look at the characteristics of a tough mind. King described it as “incisive thinking, realistic appraisal and decisive judgment.” He said:

“The tough mind is sharp and penetrating, breaking through the crust of legends and myths and sifting the true from the false. The tough-minded individual is astute and discerning. He [or she] has a strong, austere quality that makes for firmness of purpose and solidness of commitment.”

He pointed out how individuals with a tough mind are rare, and that most people are willing to settle with half-truths. He noted how soft-minded people are gullible and easily swayed by advertisements and media.

Developing and exercising this tough mind is one of the essential codes of conduct for Bitcoin Maximalism. Many of those who claim to be maximalists engage in rigorous intellectual endeavor. They spend time and energy to understand the real innovation behind Bitcoin and how proof-of-work mining provides unique utility that other chains do not have. We see this demonstration of a tough mind in the Bitcoin space.

When Nic Carter made a comment on proof of stake, applied cryptography consultant Peter Todd quickly called on his lack of technical knowledge:

As influencers and scammers try to exploit newbies, individuals with a tough mind bring discernment. Adam Back, cryptographer and inventor of hashcash, who has been warning about speculative altcoins, explained the fundamental difference between bitcoin and other coins:

Calling it a “swarm of cyber hornets,” Michael Saylor recognized the maximalists’ deployment of a tough mind generating a kind of intelligence. While some see its value, others see it negatively. Those who have been challenged by the sharp mind of maximalists claim they are mean and aggressive. They even created the label “toxic maximalist.”

But this tough mind is just one aspect of Bitcoin Maximalism. By itself, it is not complete. The way of the peaceful warrior requires the creative synthesis with its opposite.

After emphasizing the importance of a tough mind, King urged us not to stop with its development. He said, “Tough mindedness without tender heartedness is cold and detached. It leaves one’s life like a perpetual winter devoid of the warmth of spring and the gentle heat of summer.”

Describing a hard-hearted person lacking the real compassion and concerns for pains and suffering of fellow human beings, he reminded us to cultivate a tender heart.

Founder of Bull Bitcoin, Francis Pouliot, articulates qualities of Bitcoin Maximalists that are often not recognized:

It is a sense of moral responsibility and obligation to the public that drives many of maximalists’ actions:

With their tender hearts, Bitcoin Maximalists can help people identify scams and not become victims of fraud:

Der Gigi points out what is characterized as toxicity is an expression of love:

This “Satoshi love” transcends borders through people’s creative endeavors. Artists demonstrate great mastery of the power of the heart. Using their creativity, musicians, painters and meme-makers gently invite people to open their minds and look at things in a new way, helping them question their preconceived notion of what money is:

Kindness and generosity of individuals are pushing nation-state adoption:

“High Priest of Bitcoin” Max Keiser and “fairy godmother” Stacy Herbert, who have been fierce advocates for Bitcoin since its early years, now expand their mission to assist people in El Salvador, the country that adopted a Bitcoin standard. The pair distributed a generous amount of bitcoin and met with locals who had been harmed by gangs.

The Path Of Decentralization

I hear many people in the Bitcoin community say Bitcoin is like a teacher and that it helps them become a better person.

I see Bitcoin Maximalists as those who are inspired by Bitcoin and aim to maximize the values that it represents. In this sense, I say Bitcoin Maximalism is not an ideology and a fixed thing. Rather, it is a process and a striving of becoming that individuals commit themselves to and engage in out of their own volition.

Bitcoin itself, embodies the creative synthesis of the opposites: tough mind and tender heart. At the core of the protocol is censorship-resistance. It is the heart that accepts our radical differences.

Bitcoin is an open and inclusive network that does not discriminate against anyone. With the principle of consensus, it does not make anyone act against his or her own will. This “magical internet money” flourishes with diversity, while enforcing rules and maintaining the unity of a network. With a tough mind, knowledge of computer science and strong cryptography, Bitcoin defends the freedom of everyone and secures the network.

The era of modern central banking has brought lots of pain and suffering to our society. Now, Bitcoin creates the separation of money and state for the first time in history. It gives the possibility for humanity to break away from the oppressive past.

As inflation accelerates combined with growing geopolitical conflicts, decimating our economy, the world is quickly moving into an abyss of chaos. In this sea of darkness, Bitcoin offers a rescue boat.

The need for Bitcoin adoption is increasing day by day. In the years to come, as Bitcoin gains more value, attacks on the network will intensify. Bitcoiners need to stay vigilant and alert. At the same time, we need to develop the capacity for empathy and understanding for those who have yet to see the light on the other side.

Bitcoin is for everybody. The path of decentralization is paved through each of us engaging in the practice of Bitcoin Maximalism. We must become the peaceful warrior to build a road toward hyperbitcoinization, delivering freedom, justice and prosperity for all.

This is a guest post by Nozomi Hayase. Opinions expressed are entirely their own and do not necessarily reflect those of BTC Inc. or Bitcoin Magazine.