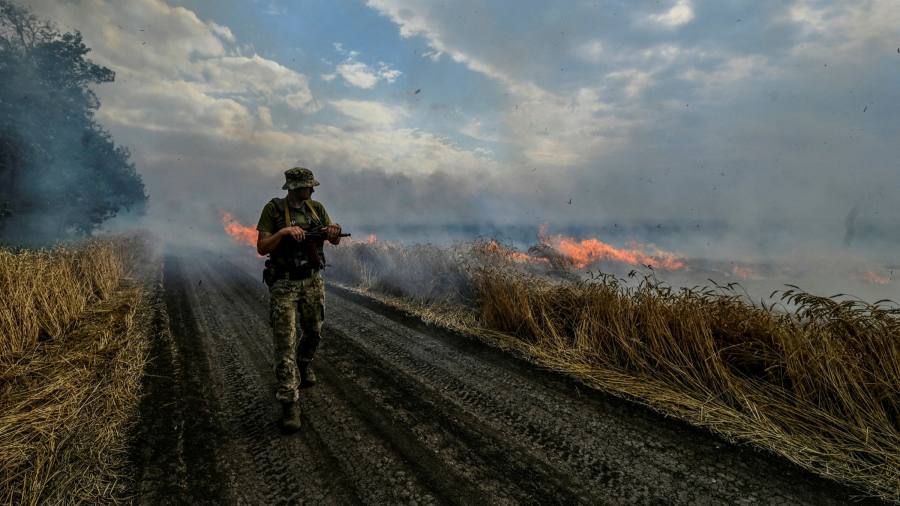 ‘They will run out of money’: farmers’ fight for survival in Ukraine


Combine harvesters cruise through golden crops of barley in the fields of Kyshchentsi, 200km south of Ukraine’s capital Kyiv, leaving clouds of dust in their wake. Wheat, rapeseed and vegetables will follow as farmers gather the last spring-planted crops.

Ukraine’s harvest has begun despite a deepening crisis in one of the world’s great breadbaskets. Russia’s invasion and blockade of the Black Sea have ravaged the country’s agricultural sector, as war damage to infrastructure, soaring fuel and fertiliser costs and a loss of exports routes leave farmers starved of revenues and with stark choices to make.

“If they can’t sell their crops, they will just run out of money,” said Kornelis Huizinga, a Dutch farmer who moved to Ukraine more than 20 years ago and farms 15,000 hectares of land in Kyshchentsi in the central Cherkasy region. “They won’t have money to buy fuel or pay salaries.”

Ukraine exported 54mn tonnes of grain from a record harvest of 106mn during the 2021-22 marketing year that began last July, according to the Ukrainian Grain Association. But the 2022-23 harvest could come in almost 40 per cent lower. The UGA warns exports could plunge to just 18mn tonnes without a swift reopening of the Black Sea route, hurting a range of countries from north Africa to south Asia that depend on Ukraine’s products.

Bohdan Chomiak, a former farmer who is on the board of GN Terminal, a grain facility in Odesa port, said Ukraine’s agricultural sector “has gone into zero mode”. Credit lines will dry up and many farms will go bust unless the blockade is ended soon. “This will be a bad year.”

The financial loss from the blockade is already running at $170mn a day, the UGA calculates, pushing many grain shippers and traders to the brink of bankruptcy.

“We use working capital and people would like their capital back and we can’t do anything,” said Chomiak. “We’re pretty close to collapsing.”

Many farmers are in even deeper financial distress as low domestic demand and prices are compounded by rising fuel and fertiliser costs.

“The only thing that saved and now supports small commodity producers is credit lines,” said Mykhailo Lazarenko, who runs a farm with 6,000 hectares of grain crops and livestock close to the city of Podilsk, 200km north of Odesa.

Russian troops have captured as much as a quarter of Ukraine’s 33mn hectares of arable land since the invasion began in February. Farmers have been killed in fields laced with unexploded munitions.

The physical losses to the sector — stolen tractors, looted grain, damaged facilities and croplands ravaged by artillery or fire — already amount to more than $4bn, according to the Kyiv School of Economics’ Center for Food and Land Use Research.

Yet some farmers continue to reap. Vast grain fields and one of the world’s most abundant sunflower crops are ripening from the southern Mykolayiv region — site of fierce fighting in recent weeks — to the relative peace of the Zhytomyr region west of Kyiv.

But the blockade of Black Sea ports means farmers could soon run out of places to store their grain and oilseeds. Corn prices have halved in three months, said Lazarenko, while wheat that fetched $300 a tonne before the war was selling from the field for less than $100, said Huizinga.

Farmers can use alternative export routes, including trucking grain through congested land crossings into Poland. Danube river terminals near the Romanian border have also provided an outlet. But transporting grain south to river ports such as Izmail can cost at least $85 a tonne, more than four times the price of transporting it to Odesa before the war, Huizinga said. 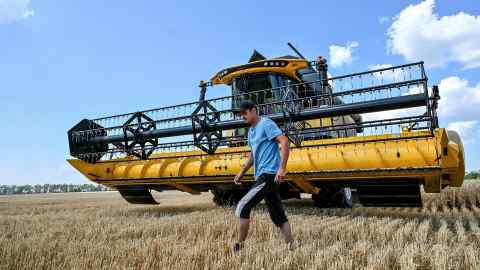 Russian missiles have destroyed part of the railway to Izmail and targeted a bridge on the road route. The channels into other Danube terminals are shallow, restricting the size of vessels that can reach them. Queues to load the barges are long.

“There have been cases when farmers and cars . . . waited 24 days at ports,” said Lazarenko.

Trucking goods by land or rail and shipment via the Danube might allow for exports of just 1mn-2mn tonnes a month — far below the 6mn tonnes of monthly exports from the seaports before the war, the UGA said, adding that the increased need to stockpile grains could fill Ukraine’s estimated 60mn tonnes of ventilated storage capacity by autumn.

With some farmers forced to leave grain outside under makeshift covers or in unsuitable workshops, Chomiak said about 15 per cent of crops harvested this year could be spoiled.

Russia’s repeated targeting of Ukraine’s main oil refinery in Kremenchuk has contributed to a doubling of the price of diesel, farmers’ most important fuel, to 58 hryvnia, or about $2 per litre. Fertiliser costs have risen almost 40 per cent, estimated analysts, after the loss of potassium and phosphorus imports from Belarus and Russia and artillery damage to domestic nitrogen production facilities.

The extra costs add to farmers’ burden, said Lazarenko. “Small farmers and those without working capital — it will be difficult for them to survive,” he said, adding that many would have to hand over their leased land to bigger farms “so the land does not stand still”.

But even if the blockade is lifted soon, officials in Kyiv and marine insurers will need to be confident that ships will be ensured safe passage. And clearing the mounting backlog of stored grain will last long into 2023, analysts said.

In Kyshchentsi, Huizinga said Ukraine’s harvest next year could be significantly diminished as farmers assess whether they can afford to plant crops.

“The guys who have cash reserves can last till next harvest,” the farmer said. “[But] some farmers say they won’t even be planting this autumn.”