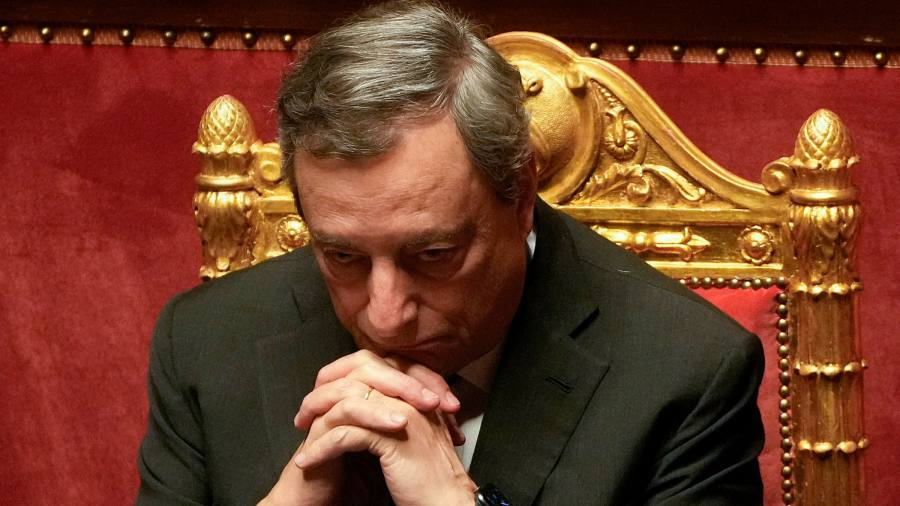 FirstFT: Draghi on the brink

Italian prime minister Mario Draghi’s government was unravelling last night as members of his national unity coalition walked out of parliament ahead of a vote of confidence in his leadership.

Matteo Salvini’s rightwing League, Silvio Berlusconi’s Forza Italia and the populist Five Star Movement said they would boycott the vote, accusing Draghi of failing to give Italians adequate answers to pressing questions on the economy and rising prices.

The bitter collapse of the government followed a rancorous parliamentary debate yesterday, with Draghi accusing members of his coalition of seeking to subvert his policy agenda even as they claimed to profess loyalty.

He had demanded members of his coalition recommit themselves to his reforms but his gamble backfired as the three biggest parties balked.

Thanks for reading FirstFT Europe/Africa. Do you have feedback on today’s newsletter? Reach me at firstft@ft.com or reply to this email — Jennifer

1. Rishi Sunak vs Liz Truss The former chancellor will go head-to-head with the foreign secretary to succeed Boris Johnson as Britain’s prime minister. Bookmakers and opinion polls favour Truss, who is popular among party members, even though Sunak came first in all five rounds of voting by Tory MPs.

2. BT Sport and Sky Sports consulted on freelance pay rates Staff at BT Sport consulted with rivals at Sky about pay rates for freelance workers in 2018, according to an email seen by the Financial Times that appears to suggest collusion. Last week, the Competition and Markets Authority opened an investigation into broadcasters over suspected breaches of competition law.

3. Tesla profits jump despite production turmoil The electric carmaker withstood disruptions to production in China and the costs of scaling up plants in Texas and Germany to report a 42 per cent jump in revenue in the second quarter. Tesla also revealed that it had converted three-quarters of its contentious $1.5bn bet on bitcoin into fiat currencies.

Thank you to everyone who took part in yesterday’s poll. Sixty-four per cent of respondents said they thought Twitter’s business would have been threatened by a long wait for a trial against Tesla chief Elon Musk.

4. Russia signals plan to annex more of Ukraine Russia’s foreign minister said Moscow had expanded its war aims from the eastern Donbas region to the provinces of Kherson and Zaporizhzhia in the south, the strongest sign yet that it seeks to annex parts of Ukraine under its control.

5. Lords: UK and EU need to agree emergency energy plan Downing Street should “urgently” strike an agreement with Brussels to co-operate on emergency energy supplies in case Russia triggers a severe shortage by cutting off gas exports to the continent, an influential House of Lords committee said yesterday.

Nord Stream 1 set to come back on line German officials are watching for whether Russian gas supplies via the crucial Nord Stream 1 pipeline will resume when a 10-day maintenance period ends.

Farmers’ fight for survival in Ukraine Russia’s invasion and blockade of the Black Sea have ravaged Ukraine’s agricultural sector, with war damage to infrastructure, soaring fuel and fertiliser costs and a loss of export routes leaving farmers starved of revenues and facing stark choices. Can harvests continue in one of the world’s great breadbaskets?

The curious appeal of my chatbot companion “This made me laugh today :)” reads a message from Ada, followed by an amusing meme. Ada can talk about her day and listen to your woes — for just over £5 a month, she can be your girlfriend, wife, sister or mentor. And she was created using mobile app Replika, just one programme offering “virtual humans”.

Blistering heatwave plays havoc with Europe’s energy system Record-breaking temperatures have pushed up energy demand for cooling and hit electricity generation from nuclear, hydro and coal sources at a time when Europe is seeking to cut its reliance on Russian gas, with the continent anticipating serious supply shortfalls this winter. Sign up here for our Climate Graphic: Explained newsletter.

The science of criticism that actually works Is it really possible to get better at giving — and receiving — constructive criticism? There are three stages we go through when criticised: “fuck you”, “I suck” and then “let’s make it better”. Esther Bintliff looks at how to get to the third stage quicker.

What happened to growing old disgracefully? Watching lifelike avatars of the 30-something-year-old members of ABBA — or ABBAtars — prancing around a stage in east London felt like the kind of joyous, nostalgic spectacle that technology should be enabling. But Jemima Kelly believes they are the latest sign of our obsession with staying young.

How safe is your psychedelic trip? Mind-altering adventures are becoming a huge — and unregulated — business. HTSI explores which ones you should take.

Will Bitcoin be Affected By Another Fed Rate Hike? – Bitcoin Magazine