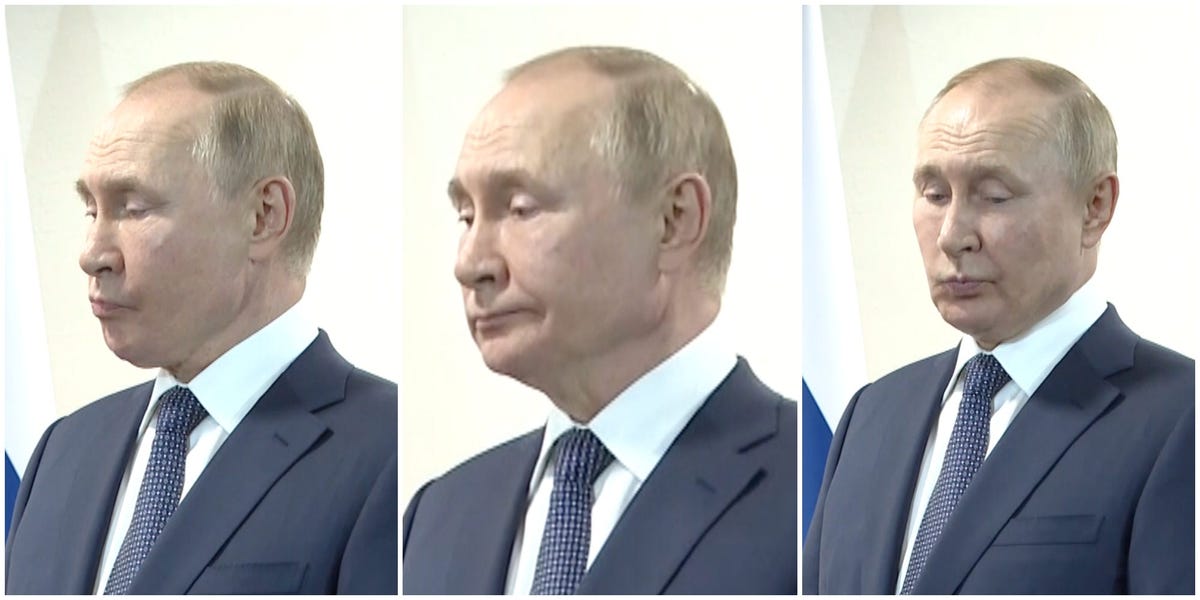 Putin Waiting Awkwardly for Erdoğan for 50 Seconds in Iran


Russian President Vladimir Putin was left standing awkwardly in front of the cameras for nearly a minute as he waited to meet Turkish President Recep Tayyip Erdoğan on Tuesday.

Putin was on a rare foreign trip in Tehran, Iran, chiefly to discuss the conflict in Syria.

In footage taken ahead of the meeting, he can be seen striding into the room, apparently expecting Erdoğan to follow.

He’s then seen shifting from foot to foot with a deeply uncomfortable expression. The camera, operated by Turkish state media agency Anadolu, zooms in on his face as he waits. After an excruciating 40 seconds of cameras clicking, Erdoğan arrives to shake his hand.

The National journalist Joyce Karam tweeted a clip of the incident, remarking that it says “plenty” about Putin’s global status since invading Ukraine.

Putin may be unused to such treatment, but he is no stranger to doling it out: In previous years, he has kept leaders like former German Chancellor Angela Merkel, former Ukrainian President Viktor Yanukovych, and former Japanese Prime Minister Shinzo Abe waiting for hours when they were in power, Radio Free Europe reported.

Even Erdoğan has been there. In 2020, Russian state TV channel Rossiya-1 superimposed a timer over its footage of the two minutes that Putin left the Turkish president waiting with his entourage outside a meeting room in Moscow.

Karam said that Tuesday’s awkward pause was “sweet payback” for this moment, which The Washington Post said caused widespread outrage in Turkey.

Both leaders rule their countries as strongmen and, as Insider has previously reported, have often played that reputation against each other — with one expert saying that the Turkish leader is “more Putin than Putin.”

Since Putin invaded Ukraine, Turkey has staked out territory as a peacemaker, having hosted multiple summits between Russian and Ukrainian representatives.

Turkey has refused to follow Western countries in sanctioning Russia, but voted in favor of suspending the country from the UN Human Rights Council.