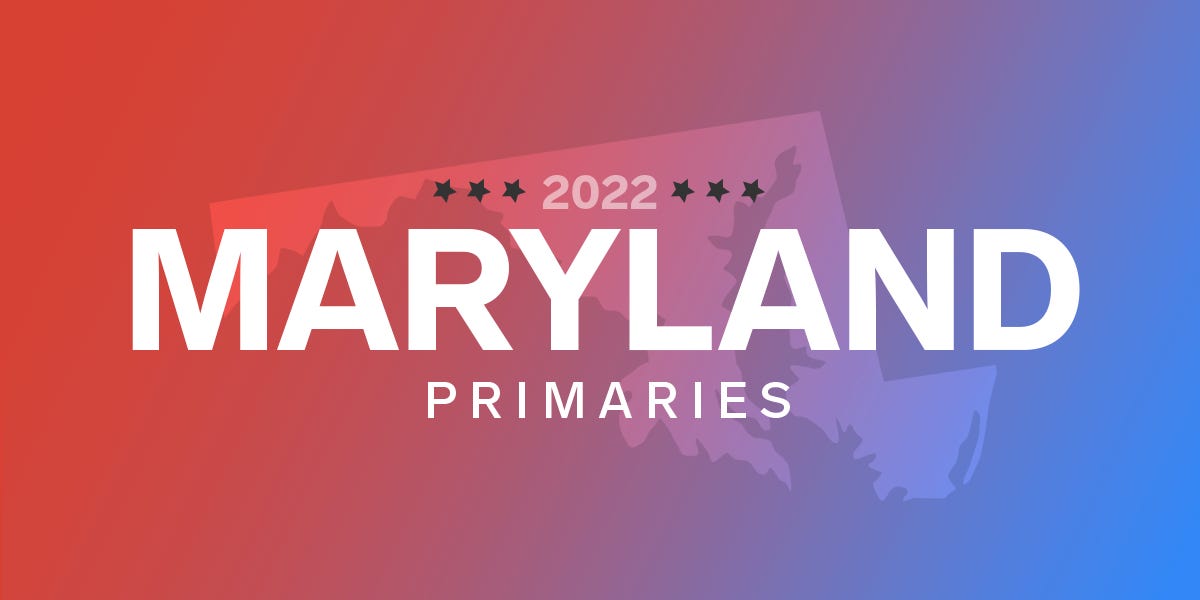 Per Maryland law, election workers cannot start counting mail-in ballots until Thursday. Since there are at least 150,000 ballots that will not be processed until Thursday at the earliest, several races will likely not be be called on Election Day.

Republican Gov. Larry Hogan — who in recent years has emerged as a vocal critic of former President Donald Trump and has hinted at a possible 2024 presidential campaign — is nearing the end of his second term in office. He is term-limited and ineligible to run for a third consecutive term.

Hogan has thrown his support behind Kelly Schulz, a former GOP state delegate who led Maryland’s labor department and commerce department under him.

However, Trump has endorsed state Del. Daniel Cox, who has tacked to the right and is more aligned with the former president’s MAGA movement.

This contest could serve as an early barometer of the future of the Republican Party, as Hogan wants the party to move beyond Trump while the former president continues to flex his muscles in electoral races across the country.

Hogan was able to win statewide in deeply blue Maryland as a moderate Republican, but despite the political headwinds facing Democrats this year, the open-seat contest represents one of their party’s best opportunities nationwide to flip a governor’s office.

A Goucher College Poll released in late June showed Cox leading Schulz 25% to 22% in the GOP primary; Franchot led the pack among Democrats with 16% of the vote, while Perez and Moore were both tied at 14% support. The survey also revealed significant amounts of undecided voters: 44% of Republicans were unsure of their choice, while 35% of Democrats were on the fence about their preferred candidate.

The incumbent, Democrat Brian Frosh, is retiring after two terms in office.

The Democratic primary features two familiar faces: US Rep. Anthony Brown, who served under Martin O’Malley as lieutenant governor from 2007 to 2015 and was the party’s 2014 gubernatorial nominee, and Katie Curran O’Malley, a former Baltimore prosecutor and ex-district court judge who is married to former Gov. Martin O’Malley. (The former judge is also the daughter of longtime Maryland attorney general J. Joseph Curran Jr., who served from 1987 to 2007.)

While Katie Curran O’Malley has emphasized her prosecutorial record in making the case for her election, Brown has pointed to his record of working on class action lawsuits and complex litigation, as well as his deep connections in Annapolis and Washington, DC.

With Franchot in the governor’s race, there will be an open-seat contest on the Democratic side for the first time since 2006.

Barry Glassman, the Harford County executive, is running unopposed in the GOP primary.

Democrats currently have a 7-1 edge in the House delegation, with Republicans hoping to make inroads after the original redistricting maps were thrown out by a judge in March. The Democratic-led legislature redrew the congressional lines, which Hogan signed into law in April.

Republican Rep. Andy Harris, who was first elected in 2010, is running unopposed in the most conservative-leaning district in the state.

In the Democratic primary, Heather Mizeur, a former state delegate and 2014 gubernatorial candidate, is running against longtime diplomat Dave Harden.

Dutch Ruppersberger, who has served in Congress since 2003, is running for reelection in a Baltimore County-anchored district. He faces George Croom, Marques Dent, and Liri Fusha in the Democratic primary.

Eric Loeb, George McDermott, and Jeff Warner and squaring off in the GOP primary.

House Majority Leader Steny Hoyer — who has served in Congress since 1981 and has become an institution in the nation’s capital — is running for reelection in a district encompassing much of southern Maryland. He faces Keith Washington and Mckayla Wilkes in the Democratic primary.

Democratic Rep. David Trone is running for a third term in a district that was made slightly more competitive in redistricting and stretches from the suburbs west of Washington, DC, to western Maryland.

Parrott lost to Trone by a wide margin in 2020 and is seeking a rematch in the newly-drawn district, which would have been carried by President Joe Biden by nearly 10%.

Rep. Kweisi Mfume, the former president and chief executive of the NAACP, is running for reelection in an overwhelmingly Democratic district anchored in Baltimore.

Rep. Jamie Raskin, a prominent member of the House January 6 committee, is running for a fourth term and faces Andalib Odulate in the Democratic primary.

Gregory Coll and Michael Yadeta will face each other in the Republican primary.