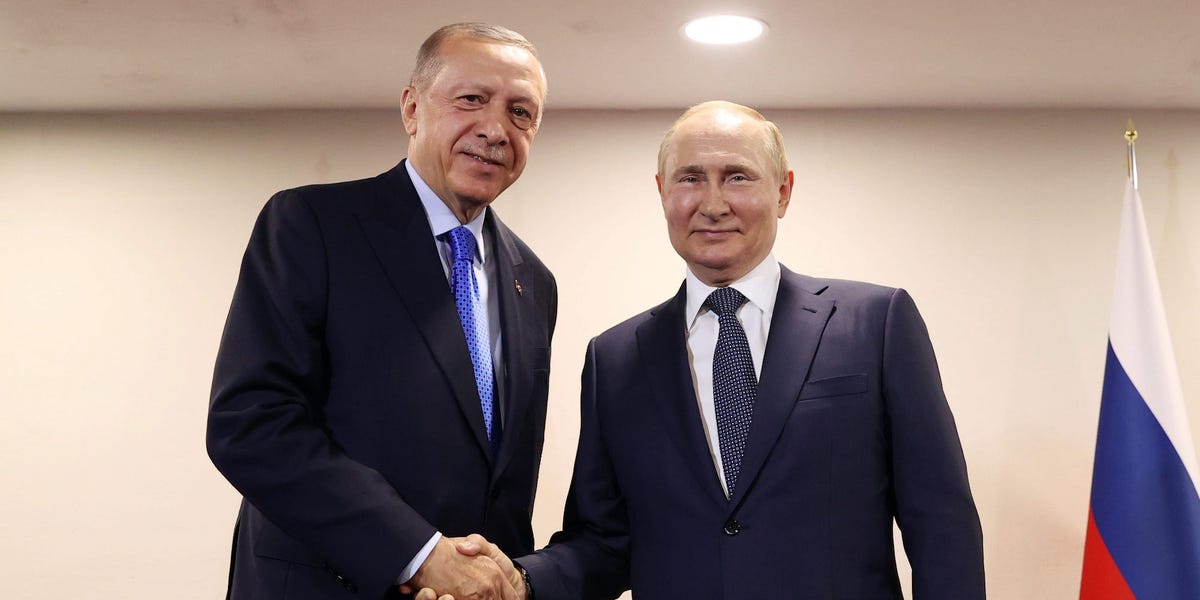 
Turkish President Recep Tayyip Erdogan on Monday once again threatened to stand in the way of Finland and Sweden joining NATO — a day before he met with Russian President Vladimir Putin in Iran.

“I would like to remind once again that if these countries do not take the necessary steps to fulfill our conditions, we will freeze the (accession) process,” Erdogan said in a televised addressed, per the Associated Press. “Our stance on this issue is very clear. The rest is up to them.”

Turkey has accused the Nordic countries of being too friendly with Kurdish militant groups it considers to be terrorists, while also taking issue with embargoes on arms exports. Along these lines, Turkey initially said it would block Finland and Sweden from joining the alliance. NATO enlargement requires unanimous agreement from all current members. But Turkey dropped its objections last month after coming to an agreement with Finland and Sweden.

“Turkey, Finland and Sweden have signed a memorandum that addresses Turkey’s concerns, including around arms exports and the fight against terrorism,” NATO chief Jens Stoltenberg said at the time.

After both Scandinavian countries submitted applications and Turkey said it was dropping its objections, NATO formally invited Finland and Sweden to join the alliance in late June. The next step in the process is for the legislatures of all 30 members to ratify Finland and Sweden’s accession.

Finland and Sweden — two historically neutral or militarily non-aligned countries — moved to join NATO as a direct response to Russia’s unprovoked invasion of Ukraine, marking one of the most significant consequences of Putin acting on his imperialistic ambitions. Indeed, Russia’s war has unified the West in historic ways.

But autocratic leaders like Erdogan who hold sway in NATO — but tend to count Putin as a friend — have exposed cracks in that unity.

As he met with Putin and Iranian President Ebrahim Raisi in Iran on Tuesday, Erdogan once again zeroed in on Kurdish militant groups.

During a joint press conference with Raisi, the Turkish president said militias cause “great trouble” for both Iran and Turkey. “We should fight against these terrorist organisations in solidarity and alliance,” he said, per the Moscow Times.

Turkey has been targeting Kurdish militants in Syria, where the Russian military exerts heavy influence, for years. The US and other Western countries have collaborated closely with the Kurdish-led Syrian Democratic Forces in the fight against ISIS. This has increased tensions between Ankara and the West, and it’s an issue at the heart of Erdogan’s repeated threats to derail Finland and Sweden’s NATO ambitions.

While in Iran, Erdogan was expected to urge Putin to permit grain exports from Ukraine in order to alleviate an escalating global food crisis catalyzed by Russia’s blockade on Ukrainian ports. Ukraine, often characterized as Europe’s breadbasket, is a major exporter of wheat, sunflower oil, and corn.

The EU has decried Russia’s blockade on Ukrainian food exports as a “war crime,” as experts warn that the Kremlin is deliberately attempting to provoke famine in poorer countries as part of its broader strategy to win its unprovoked war in Ukraine. The Kremlin has denied that it’s at fault, blaming the situation on Ukraine and Western sanctions.

Last week, Istanbul served as the venue for talks between Ukrainian and Russian negotiators on grain exports from Ukraine. As they met in Tehran, Putin thanked Erdogan for his efforts to mediate the talks. “With your mediation, we have moved forward,” Putin said to his Turkish counterpart, the Moscow Times reported. “Not all issues have yet been resolved, but the fact that there is movement is already good.”