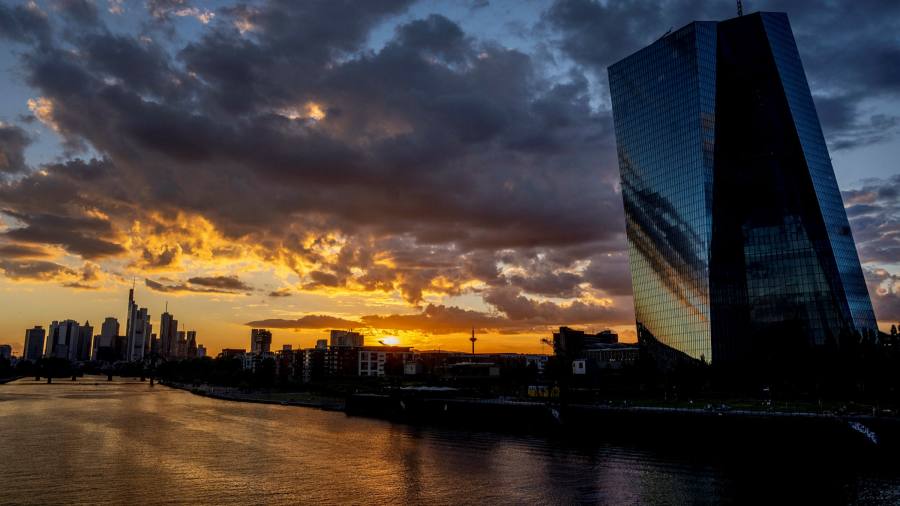 
European Central Bank policymakers will this week discuss the possibility of raising interest rates by half a percentage point, exceeding their own guidance and most economists’ expectations.

The euro rose more than 1 per cent against the dollar and the price of eurozone government bonds dipped on news, first reported by Reuters, that the ECB was considering lifting its deposit rate from minus 0.5 per cent to zero at Thursday’s policy vote. The central bank had said following its last decision, in early June, that it intended to raise rates by 25 basis points.

The debate between the 25 members of the ECB governing council, which begins on Wednesday, is expected to reflect mounting concerns that they are behind the curve on inflation, which rose to a record high for the eurozone of 8.6 per cent in the year to June.

The increase would be the first by the central bank in more than a decade, and would end an eight-year experiment with negative rates. The last time the ECB raised rates by 50bp was in June 2000.

“The case for a 50 basis point rate rise has been there for a while and arguably the ECB should have done it long ago,” said Frederik Ducrozet, head of macroeconomic research at Pictet Wealth Management. “But it is not the decision itself that would be a problem but the timing of it and the way it has been communicated.”

The ECB is due to publish its latest survey of professional forecasters a day after its policy decision on Thursday, which is likely to show that long-term inflation expectations have risen further above its 2 per cent target. Ducrozet said that if ECB rate-setters already knew the results, it could persuade some of them to opt for a bigger rate rise.

Some ECB council members — including those from Baltic countries where inflation is close to 20 per cent — have broken ranks to publicly call for a 50bp rate rise on Thursday. However, no decision has been taken and the ECB declined to comment on this week’s meeting.

ECB policymakers are likely to be closely watching the political situation in Italy, where Prime Minister Mario Draghi is due to address parliament on Wednesday to outline his next move after his ruling coalition lost the support of a key party, prompting talk of an early election this year.

Most central banks around the world have reacted quicker than the ECB to the continued surge in inflation — as energy and food prices have been driven upwards by the fallout from Russia’s invasion of Ukraine — and several have raised rates more than expected recently.

The Federal Reserve exceeded its own guidance last month to raise rates by 75bp for the first time since 1994, while the Swiss central bank surprised markets with a 50bp rate rise last month and the Bank of Canada raised rates by 100bp last week.

After the ECB council met in Amsterdam last month, its president Christine Lagarde said it “intends” to raise interest rates by 25bp at its July meeting and could then raise them by a bigger amount at its September meeting if inflation stayed high.

When asked at the post-meeting press conference why the ECB seemed to rule out a 50bp rate rise in July, Lagarde said: “It is good practice, and it is actually often done by most central banks around the world, to start with an incremental increase that is sizeable, not excessive and that indicates a path.”

But at an ECB conference a few weeks later she said there were “clearly conditions in which gradualism would not be appropriate” and which would require it “to withdraw accommodation more promptly to stamp out the risk of a self-fulfilling spiral”.

These included a “de-anchoring” of inflation expectations and “a more permanent loss of economic potential” caused by a cut-off of Russian energy supplies to Europe.