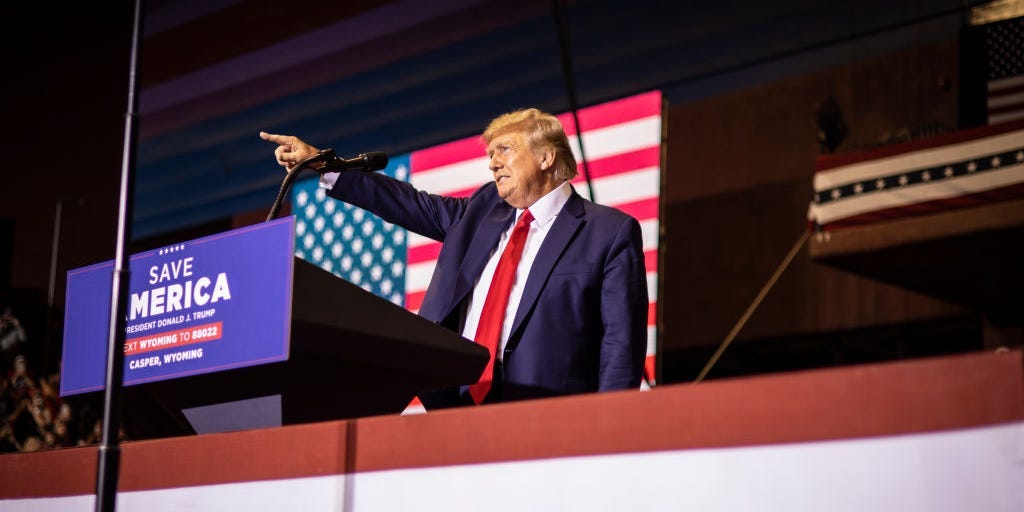 Trump Drawn to 2024 Run Because of Presidential Immunity: Report

Four people with knowledge of the situation told the publication that Trump has recently spoken about the legal protections being the president provides.

Trump has “spoken about how when you are the President of the United States, it is tough for politically motivated prosecutors to ‘get to you,'” one of the sources told Rolling Stone.

“He says when [not if] he is president again, a new Republican administration will put a stop to the [Justice Department] investigation that he views as the Biden administration working to hit him with criminal charges — or even put him and his people in prison,” a source told the publication.

Insider contacted Trump’s spokesperson for comment on the claim.

Trump faces potential legal problems from several directions, most stemming from his bid to overturn his defeat in the 2020 election.

The House Jan. 6 committee has said it may refer Trump to the DOJ over his actions leading up to and during the January 6, 2021, attack on the US capital.

Meanwhile the district attorney in Fulton County, Georgia, is investigating Trump’s bid to pressure state officials to help him overturn his 2020 defeat.

The Justice Department has launched a wide-ranging investigation into the Capitol riot, though it is unclear to what extent it touched on Trump and his circle.

A Manhattan district-attorney investigation into his business practices appears to be winding down with no charges brought against Trump, while a civil investigation by the New York attorney general is ongoing.

Trump has described the investigations as politically motivated. On the issue of the false election-fraud claims, Trump said he genuinely believes the debunked claims and was acting legitimately to address them.

Under DOJ rules, sitting presidents are considered immune from prosecution during their time in office.

According to reports, Trump is considering announcing a presidential bid in the next few weeks.

That idea has created tensions with Congressional Republicans, who want to keep the focus on President Joe Biden to maximize their gains in the upcoming midterm elections.