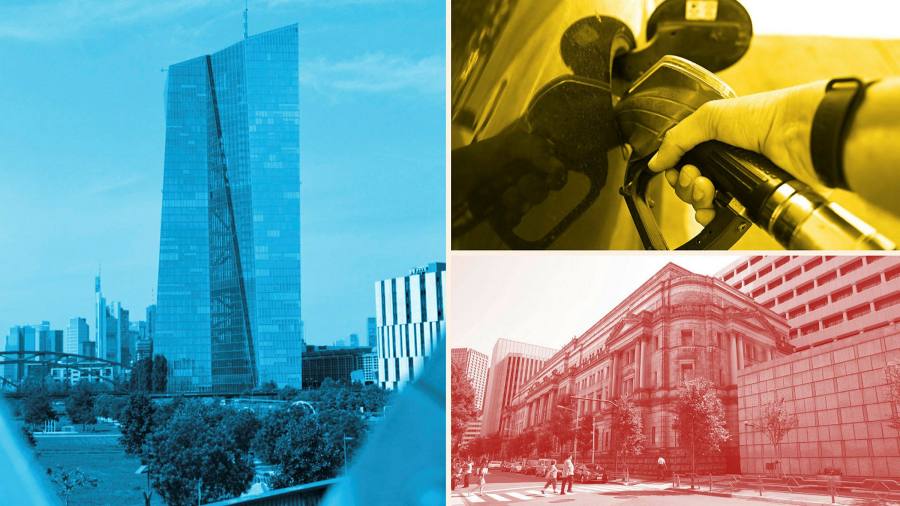 Will the ECB unveil its new ‘anti-fragmentation’ tool?


Will the ECB shed light on its ‘anti-fragmentation’ tool?

The European Central Bank has widely signalled its plans to raise interest rates this month for the first time in more than a decade, as it battles record eurozone inflation that has triggered a worsening cost of living crisis.

Economists are expecting a 0.25 percentage point increase in eurozone borrowing costs at the conclusion of Thursday’s monetary policy meeting, taking the ECB’s main deposit rate to minus 0.25 per cent.

The central bank has also indicated that a larger rise may be necessary in September, unless the inflation picture drastically improves. Eurozone consumer price growth hit 8.6 per cent in the year to June.

But rate setters elsewhere have moved more aggressively in recent weeks, with the US Federal Reserve, the world’s most influential central bank, lifting borrowing costs by an extra large 0.75 percentage points in June, the most since 1994.

A more vigorous stance from the Fed has also lent support to the dollar, pushing the euro down to parity with the US currency this month for the first time in two decades.

The challenge for the ECB is to turn the policy screws in the eurozone without squeezing its more heavily indebted economies such as Italy and Greece.

Analysts at Goldman Sachs say that a quarter-point increase remains more likely than a half-point move — not only because the ECB governing council has strongly guided to that decision, but also because “the growth outlook has weakened and the ECB has historically not delivered hikes that were less than 70 per cent discounted”.

For now, market participants will be watching closely for further clues about the ECB’s mooted “anti-fragmentation” tool, aimed at limiting divergence in borrowing costs between the bloc’s strongest and weakest countries.

The gap between Italian and German benchmark 10-year bond yields on Friday yawned to its widest in a month, indicating that investors were demanding a higher premium to hold riskier eurozone debt. Harriet Clarfelt

Has UK inflation picked up pace?

Economists expect no respite for UK inflation when June data are released on Wednesday.

The headline consumer price index is forecast to have climbed to 9.3 per cent, from a 40-year high of 9.1 per cent in May, according to a Reuters poll.

Rising fuel prices were a driving factor behind that further acceleration, said Ellie Henderson, economist at Investec, reflecting a further surge at the pump in June. She added that flight tickets were likely to have increased due to those higher fuel costs and strong demand after two years of restricted travel. A weak pound and the war in Ukraine were also expected to have resulted in continued price pressure on food.

While the inflation outlook is dominated by energy prices, political events add uncertainty to the domestic picture as many of the frontrunners to replace current UK prime minister Boris Johnson — former chancellor Rishi Sunak aside — have promised sweeping tax cuts as part of their leadership campaign. “Such tax cuts may help stimulate the economy, but also risk creating more entrenched underlying inflation,” said Henderson.

High inflation and a tight labour market may add to expectations that the Bank of England will raise interest rates by 0.5 percentage points at its next meeting on August 4. Markets are pricing in a 79 per cent probability of such an increase, marking a step up from the 0.25 percentage point increases at the BoE’s previous five meetings. Valentina Romei

Will the BoJ tighten policy at its meeting this week?

Japanese consumer price index inflation has slowly crept higher to 2.5 per cent from the negative rates seen last year. But it remains well below the levels experienced elsewhere in the world.

That gives the Bank of Japan ample room to maintain its ultra-loose overnight interest rate of -0.1 per cent at its two-day policy meeting on Wednesday and Thursday. And while the yen has set a series of fresh 24-year lows in recent weeks, as investors move money into markets offering higher interest rates, and now trades at close to ¥139 a dollar, the BoJ has shown little appetite for changing tack.

Analysts also roundly expect the central bank to stick with its 0.25 per cent yield target for its 10-year government bond, which came under pressure recently as traders sought to test the BoJ’s commitment to its accommodative policy stance.

“The BoJ will not adjust policy due to market pressure,” analysts from UBS, the Swiss bank, wrote in a note, adding that pressure on the bonds had eased as US yields had fallen.

In their base scenario, analysts at Morgan Stanley MUFG do not anticipate any change to the BoJ’s yield control policy until well into next year. They do not expect the short-term policy rate to increase in 2023. William Langley

Once a key driver of global venture activity, fintech investment slows around the world – TechCrunch