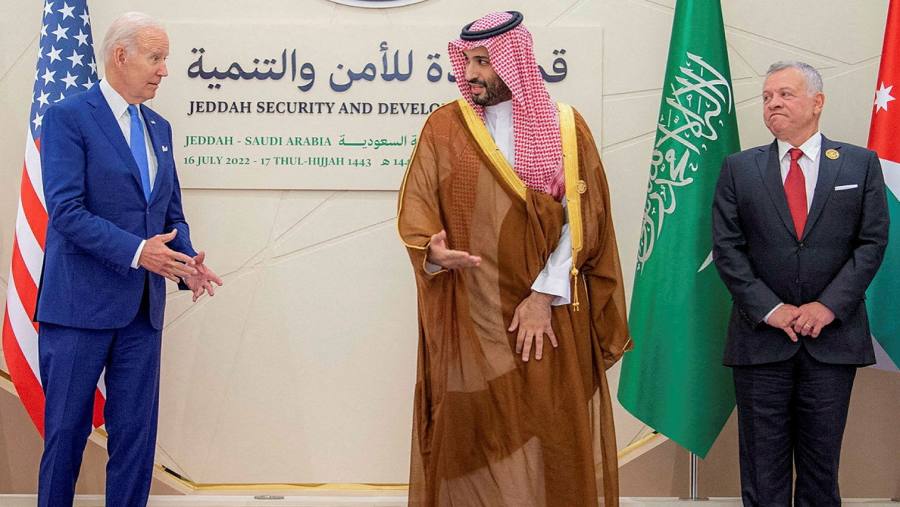 Biden’s fist bump belies unease between Saudi Arabia and US


Just hours after Joe Biden greeted Crown Prince Mohammed bin Salman with a fist bump ahead of a long meeting between the pair, the US president was still insisting his visit to Saudi Arabia had nothing to do with the kingdom’s day-to-day leader.

“I didn’t come here to meet with the crown prince,” Biden said, pointing to his agenda, which included a summit with other Arab leaders.

For weeks ahead of his visit to Saudi Arabia, the White House sought to use the summit to deflect criticism of the contentious trip to a nation Biden had pledged to treat as a pariah. But it is the images of the president engaging Prince Mohammed — the man who US intelligence concluded authorised the operation that led to the murder of Jamal Khashoggi — that may be the most enduring legacy of the trip.

“This visit was mostly about optics, particularly the Saudi piece of it,” said Steven Cook, a senior fellow at the Council on Foreign Relations. “There was a lot of upside for the Saudis and a lot of downside for the Americans.”

Biden and his team knew the trip would come at a political cost — and that Riyadh would use his meeting with Prince Mohammed as a sign of the crown prince’s rehabilitation in the west, less than four years after Khashoggi’s murder. But with oil prices at their highest levels in more than a decade, and Washington trying to isolate Russia, aides pressed Biden to repair ties with the world’s top crude exporter.

The challenges, however, of resetting relations with Riyadh were underscored when Saudi officials quickly pushed back against Biden’s assessments of two key US objectives: human rights and oil.

The president told reporters he raised the murder of Khashoggi, who was killed in by Saudi agents in 2018, at the top of his meeting with Prince Mohammed.

Biden said Prince Mohammed reiterated that he was “not personally responsible” for the killing — Riyadh has blamed the murder on a rogue operation.

The president, who previously refused to speak to the crown prince, said he “indicated that he probably was” in response. However, Saudi officials said Prince Mohammed pushed back, insisting that those responsible were tried and imprisoned.

The officials said the crown prince then cited US troops’ abuse of prisoners at Iraq’s Abu Ghraib prison as he sought to question Washington’s human rights record. The exchange was brief, and the leaders moved to other topics, they added.

Similarly, Biden told reporters that he felt he had secured Saudi Arabia’s agreement to produce more oil in the coming weeks. But Saudi officials, who have long argued that simply pumping more crude will not dampen prices, were quick to play this down.

They repeated Riyadh’s position that any decision to produce more oil would be based on demand.

Biden did secure some foreign policy wins on his first visit to the Middle East as president, which began with a stop in Israel. This included Saudi Arabia agreeing to open up its airspace to all flights to and from Israel, a country Riyadh has no formal relations with.

Washington and Riyadh also agreed to co-operate to build 5G and 6G in Saudi Arabia, a deal the US hopes will wean the kingdom off Chinese communications technology.

But Brian Katulis, senior fellow at the Middle East Institute, said the success of the visit would only become clear in the coming weeks, and would hinge on the Saudis’ follow through.

“If Biden does get relief at the gas pump and he is seen as getting some relief for Americans on inflation through this visit . . . that is going to pay more political dividends than the price that comes from people spouting off on Twitter,” he said.

Even before it began, the trip had drawn criticism from human rights activists and US lawmakers, and Biden had struggled to articulate why he was going to Saudi Arabia.

At various times he suggested it was to push for greater regional integration, to bolster efforts to end a seven-year war in Yemen and stabilise energy markets.

The message got sharper over the course of the visit, and he ended with a speech on Saturday to the leaders of Gulf states and Egypt, Jordan and Iraq, in which he insisted that the US would remain an “active, engaged partner in the Middle East”.

“We will not walk away and leave a vacuum to be filled by China, Russia, or Iran,” Biden said.

Those comments were designed to address the perception among Arab states that successive US administrations have sought to disengage from the region. That sentiment has pushed Gulf states in particular to deepen ties with Russia and China, the biggest buyer of oil from the region, and hedge their traditional relationships with Washington.

Gulf states and Israel also worry about Biden’s efforts to revive the 2015 nuclear deal Iran signed with world powers, fearing it will embolden their arch rival. Riyadh has been annoyed by his criticism of human rights and his policies on Yemen, where Saudi Arabia leads a coalition fighting Iranian-aligned Houthi rebels.

Jon Alterman, the director of the Middle East programme at the Center for Strategic and International Studies, said Biden’s “general instinct is that the Middle East will be a source of trouble and not opportunity”.

But factors including the energy crisis triggered by Russia’s invasion of Ukraine and concerns about China’s deepening footprint in the region, has meant he cannot ignore the region.

“He is reluctant to get overly embedded, but he also understands that he can’t abandon it, either,” Alterman said.

Whatever the view in the White House, Biden ended up delivering a “huge win” for Prince Mohammed, said Ali Shihabi, a Saudi commentator familiar with the royal court’s thinking.

“The visit was a vindication for MBS and one that proved that you can certainly not ignore Saudi and MBS let alone isolate them,” Shihabi said.

Yet for Saudi Arabia’s critics, the trip dashed any lingering hopes Biden would back his earlier promises and hold the kingdom to account.

Khashoggi’s fiancée Hatice Cengiz tweeted her condemnation of the trip using a fake account of the former journalist and a picture of Biden and Prince Mohammed fist bumping.

“Hey @Potus, is this the accountability you promised for my murder?” she wrote.

Hawaiian Airlines Passenger Kicked Off Plane Due to ‘Invalid Ticket’

The bright side of fintech funding results – TechCrunch