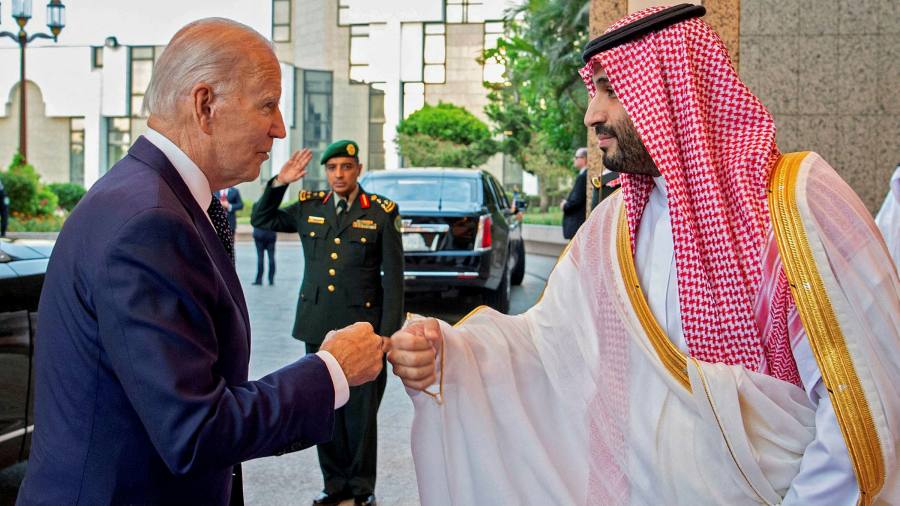 
US president Joe Biden said he expected Saudi Arabia to take “further steps” to increase the supply of oil in the “coming weeks” following a meeting with Crown Prince Mohammed bin Salman in Jeddah.

Speaking after the meeting, Biden said he was doing “all I can” to increase crude supplies and that he expected to succeed. “Saudi shares that urgency and based on our discussions today I expect we’ll see further steps in the coming weeks.”

US consumers might feel the effects of his visit to the oil-rich kingdom at the petrol station in “another couple of weeks”, he added.

However, a Saudi official restated the kingdom’s position on production after the meeting, saying it would be decided based on demand.

“Oil is not a political weapon, oil is not a tank,” said state minister for foreign affairs Adel al-Jubeir. “You cannot point it at someone and fire. Oil is a commodity.”

Oil prices edged higher on Friday owing to a lack of detail in the remarks from the US president, who did not offer any specifics on whether Saudi Arabia had agreed to a boost in production beyond already-planned supply increases.

International benchmark Brent traded up 2 per cent to more than $101 a barrel, while West Texas Intermediate, the US oil marker, rose to $97.60 in late-afternoon trading in New York.

A joint statement after the event, released by Saudi Arabia, made no mention of oil supply increases but said the two countries “renewed their commitment towards the stability of global energy markets” and that the US “welcomed the kingdom’s commitment to support balance in the global oil market”.

Opec has been raising production as it phases out deep supply cuts made when oil prices crashed during the coronavirus pandemic, and agreed last month to accelerate the additional output in July and August. Opec producers will meet again in early August, when Saudi Arabia and other members could discuss changes to production quotas.

“Odds were always small of a production bump from this trip,” said Bob McNally, a former adviser to the George W Bush White House and head of Rapidan Energy Group. He said the administration still expected that the Saudis and Emiratis could increase production later this year if markets tightened. “But nothing is guaranteed.”

Biden travelled to the kingdom with US petrol prices near record highs despite his earlier pledges to make Saudi Arabia a “pariah” following the murder of Jamal Khashoggi, which the CIA concluded was ordered by Prince Mohammed.

Aides had played down Biden’s chances of securing specific announcements on oil during the trip but signalled they expected the visit would yield returns in the future.

The US president arrived in Jeddah on Friday evening and greeted Crown Prince Mohammed, the kingdom’s day-to-day ruler, with a fist bump that provoked a stinging rebuke from Hatice Cengiz, who was Khashoggi’s fiancée.

Writing on Twitter, she imagined what Khashoggi would post if he were able to: “Hey @POTUS, Is this the accountability you promised for my murder? The blood of MBS’s next victim is on your hands.”

Biden said he had raised the death of Khashoggi at “the top of the meeting” with Prince Mohammed and addressed other human rights concerns.

Recounting the meeting, Biden said Prince Mohammed had claimed that “he was not personally responsible” for the murder. “I indicated I thought he was,” he added.

Saudi officials said the exchange on Khashoggi and human rights did not last long. Princess Reema bint Bandar, the Saudi ambassador to the US, said Prince Mohammed told Biden “that the individuals that were personally responsible . . . have been tried”.

While aides said the visit would aim to deepen Israel’s regional integration and boost American presence in the region, Biden is particularly focused on boosting oil production to tame rampant energy prices driven by Russia’s invasion of Ukraine.

The president, who has been criticised by human rights groups over the visit, had in recent weeks downplayed the meetings with Saudi leadership, saying he was attending a summit to encourage peace. 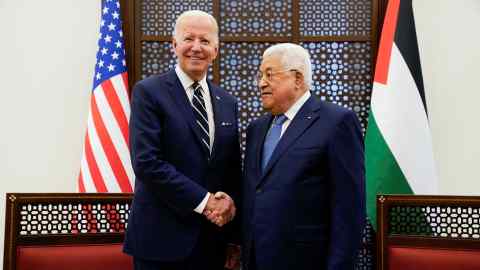 But in Riyadh, his presence is seen as an about-face and recognition that he needs to engage with Prince Mohammed, who may rule the kingdom for decades.

Biden was received at the airport of the Red Sea city of Jeddah by the regional governor, in what Saudi officials said was standard protocol for a visiting head of state. It was, however, a relatively muted welcome compared with the reception given to former president Donald Trump in 2017.

After about three hours of meetings, Biden announced that Saudi Arabia and Israel had agreed to the transfer of multinational peacekeeping forces that had been stationed on two Red Sea islands — which Egypt had transferred to Saudi Arabia in 2017 — allowing Riyadh to assume control of the territory.

That was agreed in exchange for Riyadh’s move to open its skies to all flights to and from Israel, which was announced before Biden arrived in Jeddah.

Once a key driver of global venture activity, fintech investment slows around the world – TechCrunch