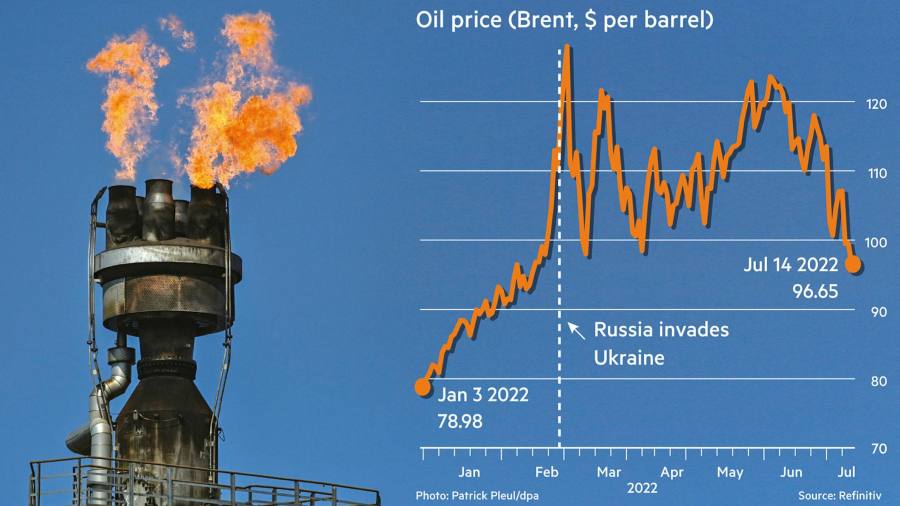 
Oil prices have fallen below $95 a barrel for the first time since Russia invaded Ukraine, as fears of an impending global recession grip commodity markets and batter forecasts for demand.

Both major benchmarks for crude shed more than $5 a barrel on Thursday, or more than 5 per cent, adding to a broad rout over the past six weeks.

“Fear of recession is what is driving the market today,” said Dennis Kissler, senior vice-president of trading at BOK Financial.

Russian president Vladimir Putin’s full-blown invasion of Ukraine caused prices to soar earlier this year, with both Brent and WTI briefly trading above $130 as western countries retaliated by imposing sanctions on Russia, one of the world’s biggest exporters.

But recessionary jitters and the prospect of the US Federal Reserve stifling growth with more aggressive rises in interest rates have since called a halt to the rally. Crude prices have dropped by around a fifth since mid-June as traders brace for a sharp drop-off in consumption.

“The market is very concerned that recessionary demand destruction is going to put the brakes on growth,” said Robert Yawger, executive director for energy futures at Mizuho.

Oil has not been the only commodity to run out of steam in recent weeks. Many of the price surges that have helped drive high levels of inflation have also slumped. Copper and iron have both fallen by about a third since their spring peaks.

“They’re all crashing,” said Stephen Schork, editor of oil market newsletter The Schork Report. “Commodities are your best economic indicator and what they’re indicating is pain down the road for this economy.”

Elevated oil prices have piled pressure on the administration of US president Joe Biden, whose polling numbers have dropped as motorists contend with near-record prices at the pump.

Biden is set to visit Riyadh on Friday for his first meeting with Saudi crown prince Mohammed bin Salman, where he will lean on the kingdom to pump more oil to pull prices lower.

Thursday’s slide came as data indicated high prices were beginning to deter US motorists from taking to the roads. Figures released on Wednesday by the US Energy Information Administration suggested petrol demand had slipped to its lowest level for this time of year since 1996.

“The rally perhaps ran out of the fuel of plausible arguments and hard data supporting it,” said Paul Horsnell, head of commodities research at Standard Chartered.

“There’s a limit to how often consultants and analysts can simply say ‘it’s very tight’ and expect the market to accept that without seeing much data backing the contention up.”