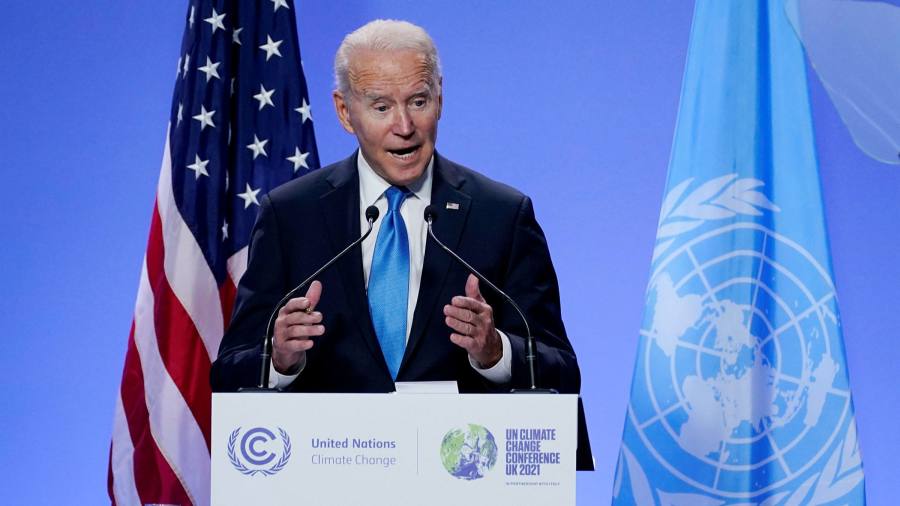 Biden’s ‘climate presidency’ is on the line

It is not just in Europe that energy supply concerns are keeping policymakers on edge. Fears of blackouts are also front of mind for authorities in America’s energy heartlands — albeit for a very different reason.

The Texas electricity regulator has urged people to cut back on their power usage as soaring temperatures send air-conditioning units into overdrive and push the grid to its limit.

Temperatures in Houston yesterday flirted with new records as a sweltering heatwave courses through the centre of the country.

However, the focus of today’s newsletter is Washington, where president Joe Biden’s grand plan to lead the charge away from oil looks increasingly imperilled as he contends with the reality of sky-high energy prices. Justin analyses the backtracking.

In Data Drill, Amanda breaks down Germany’s reliance on the Nord Stream 1 pipeline.

Is US president Joe Biden’s promise to clamp down on new oil projects cracking as he comes under intense political pressure to tame sky-high fuel prices?

It’s starting to look that way.

Last week, the administration released an environmental impact study for ConocoPhillips’ proposed Willow oil project in Alaska, which was seen as a likely precursor to approving the massive multibillion-dollar development. That came on the heels of the administration’s new five-year offshore leasing plan that seems likely to lead to a steady flow of Gulf of Mexico oil auctions in the coming years.

Meanwhile, Biden heads to Saudi Arabia this week for a high-stakes meeting with the kingdom’s leadership, where ensuring more oil supply is expected to be high on the agenda. It’s a dramatic reversal on the international stage for the president, who branded Saudi Arabia a “pariah” state after the killing of Saudi journalist Jamal Khashoggi.

But he has been forced to appeal to the oil-producing powerhouse to lift supplies as oil has shot past $100 a barrel this year, driving inflation across western economies to its highest rate in decades. High pump prices have played a big role in the US president’s sinking popularity.

Biden, in an unusual Washington Post op-ed over the weekend defending his trip to the kingdom, said the Saudis were now “working with my experts to help stabilise oil markets with other Opec producers” and that the Middle East’s oil was “vital for mitigating the impact on global supplies of Russia’s war in Ukraine”.

Closer to home, similar reversals on oil may be taking shape after Biden came into office promising to put an end to new fossil fuel projects in federal areas such as the Gulf of Mexico and Alaska — where he has more authority than in the shale fields of Texas and Pennsylvania, which are largely on state and private lands.

In Alaska’s Arctic north, Biden now looks more likely than not to approve ConocoPhillips’ Willow project, which could eventually pump 180,000 barrels a day of crude, compared to Alaska’s current output of about 420,000 b/d. Environmentalists have warned it will pump out huge amounts of climate-warming emissions for decades and disrupt nearby wildlife.

The project had been approved by the Trump administration before being put on hold in 2021 by a federal judge, who questioned the initial environmental impact study’s climate analysis. Biden’s team did a relatively quick redo of the report, pointing to a desire to push it forward.

In the Gulf of Mexico, the Biden team is proposing as many as 10 auctions over the next five years — or as few as zero.

Analysts say it’s likely there will be new leasing, which could lead to projects that will produce oil for decades, considering the pressure he is under to spur domestic oil supply.

Environmental organisations have been alarmed by the administration’s pivot.

The Sunrise Movement, a climate activist group that was crucial to marshalling youth support for Biden in 2020, has turned on the president. The group took to Twitter on Monday to call on Biden to “end leasing on public lands & waters for fossil fuel production” and “stop issuing permits for any new fossil fuel infrastructure”, accusing the president of making “empty promises” on climate.

Oil executives are pressing their advantage, pushing for a more fulsome embrace of their industry and arguing the administration is still impeding supply and investment.

Paul Goodfellow, the head of Shell’s Gulf of Mexico business, told ES there remained a huge amount of uncertainty over the future of development in the Gulf. He pointed to a long gap between bid rounds and the administration’s decision not to appeal against a judge’s ruling that retroactively cancelled a bid round it held late last year.

In a court filing about the cancelled bid round, Shell, which is the largest producer in the Gulf of Mexico, said the decision had “cast a huge shadow over the United States as a reliable place to do business”.

Some analysts argue that Biden has left himself room to backtrack on things like new offshore oil leases if fuel prices drop. But for now his promised “climate presidency” is looking a lot more oily than expected. (Justin Jacobs)

Russian gas flows via Nord Stream 1 came to a halt yesterday for scheduled repairs, tightening Europe’s gas market and raising fears that the Kremlin may not resume deliveries after the 10-day maintenance period.

Dutch TTF gas prices were already high before the halt and averaged $171 per megawatt hour yesterday. Natural gas prices doubled last month after Russia cut flows through Nord Stream 1 by 60 per cent. It is the main pipeline that delivers gas directly to Germany.

Russia blamed Canada for June’s supply cuts, saying Ottawa’s sanctions prevented the return of a repaired turbine for the pipeline. Canada allowed the return over the weekend in hopes of easing Germany’s gas shortage.

German officials remain highly sceptical that Moscow will resume flows after maintenance and urged households to conserve gas. Berlin is in stage two of its emergency gas plan after Russian cuts to supply last month.

Before the war in Ukraine, Germany relied on Moscow for more than half of its gas supply. The country has been scrambling to secure enough energy supplies ahead of winter, from firing up old coal plants to rationing hot water.