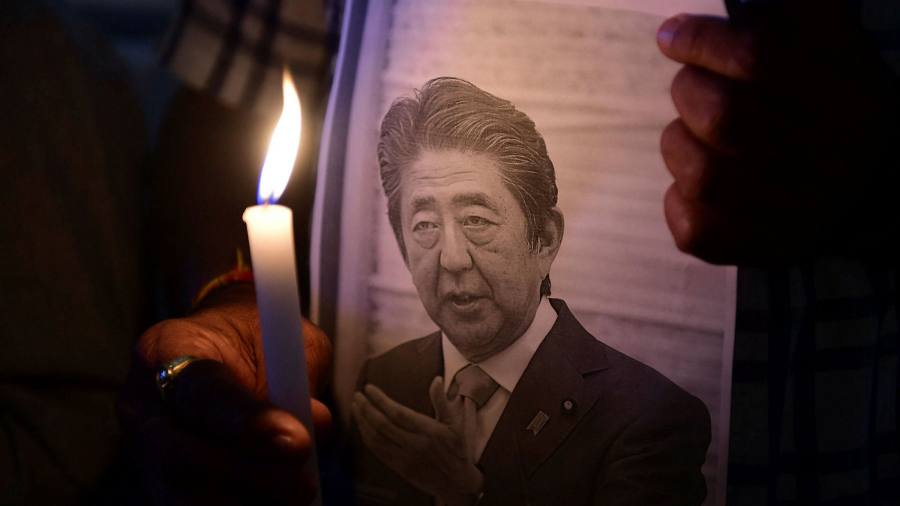 The vote came two days after the country’s longest-serving prime minister was killed by a lone gunman while giving a campaign speech in the western city of Nara.

Analysts had initially expected voter turnout to be a historic low. But projections from state broadcaster NHK suggest that more people voted than in the 2019 election after political parties united in condemning Abe’s shooting as “a challenge to democracy”.

The campaign was fought over the cost of living crisis and security issues tied to Russia’s invasion of Ukraine, not constitutional reform. But the strong outcome gives Kishida, known for his moderate views, a chance to revise Article 9, which stipulates that land, sea and air forces “will never be maintained”. This was a life-long ambition for the hawkish Abe.

As of midnight local time, NHK’s exit polls suggest that the LDP and its coalition partner, Komeito, won 73 of the 125 seats up for grabs. Adding the seats won by two other parties backing constitutional reform, the ruling coalition clinched a two-thirds majority needed to revise the constitution, which was written by US occupying forces after the second world war.

The win also gives Kishida a freer hand to shape his policy and appoint people close to him in powerful positions. Analysts said, however, that the loss of Abe, the nation’s most polarising and influential leader in decades, could rock the power balance inside the LDP.

1. Wirecard forged client details to secure €900mn SoftBank investment New details reveal the German payments group created a fake client list and lied about internal records to secure the confidence of SoftBank after an FT investigation raised questions about its business in 2019. The deception came before a much larger attempt at data fraud by the company months before its collapse. Wirecard’s former chief executive and managers are likely to face trial this year over charges of fraud, breach of trust and market manipulation.

2. China reimposes curbs as BA.5 variant spreads Omicron outbreaks Eleven Chinese cities are under full or partial lockdowns as authorities rush to stamp out the more infectious Omicron subvariant that has become dominant in the west. The restrictions are part of President Xi Jinping’s stringent zero-Covid policy and come only weeks after a two-month lockdown in Shanghai left residents frustrated and stalled the global economy.

3. Twitter hires elite law firm to sue Elon Musk for ending $44bn acquisition Twitter hired Wachtell, Lipton, Rosen & Katz as it readies for a legal battle against Musk for walking away from his deal to acquire the social media company. The San Francisco company is preparing to file a lawsuit with the Delaware Court of Chancery against Musk early this week. Wachtell Lipton defended Musk in an earlier lawsuit and is arguably the leading litigation practice in Delaware, where many companies are incorporated.

4. Canada waives Russian sanctions to ease Germany’s gas shortage Canada will allow the export of a turbine to Russia to repair the Nord Stream 1 pipeline, which supplies Germany with much of its Russian gas. The export was originally blocked owing to Canada’s sanctions against Russia’s energy sector. Ukrainians criticised the move as another example of the west bowing to Russian threats to cut off gas from Europe.

5. Sri Lanka opposition parties in talks after protesters ransack capital Opposition parties in Sri Lanka have started talks to form a new government after the president and prime minister resigned owing to public pressure. Thousands of protesters, angered by rising prices and shortages, stormed the houses of the country’s leadership on Saturday. Sri Lanka’s economic collapse is one of the starkest examples of emerging market countries buckling under the pressure of the pandemic and surging costs.

Tory party elections The UK Conservative party’s backbenchers elect new officials for the 1922 committee today. The first task for this newly elected parliamentary body will be to agree on rules for electing the next British prime minister, which is expected to take place by early September.

Vigils for former Japanese PM Shinzo Abe A vigil for the country’s longest-serving prime minister is expected tonight in Japan, followed by a funeral on Tuesday. Abe was assassinated in the city of Nara on Friday during a campaign speech, shocking a nation where political violence and gun ownership are rare.

Cutting China tariffs will not tame inflation, warns US commerce secretary Gina Raimondo conceded in an NBC interview that removing US tariffs on Chinese goods would not fight high prices in a “very significant way.” While the senior administration official still supported the move, her statement highlighted the White House’s difficulty countering inflation. President Joe Biden is expected to make a decision on the removal soon.

Abortion bans will hit the poor hardest Denying women access to abortion in many US states will worsen inequality and increase financial hardships for women and their families, Caitlin Gilbert reports. Studies show that children of women denied abortions were more likely to live in a household that could not afford to pay for basic living expenses compared to children of women who received an abortion earlier.

Opinion: What Shinzo Abe’s assassination means for ‘Pax Japonica’ The assassination of Japan’s former PM prompted flashbacks of the country’s bloody political past. While Pax Japonica will most likely remain, it is dangerous to assume that such stability is determined by low public interest in politics, argues Leo Lewis.

Opinion: Get ready for salaries to become more public Pay transparency is on the rise in the US and Europe to close the gender pay gap. But the burden should not fall on women to be more assertive about pay rises, argues Pilita Clark. For decades, countries have mandated equal pay for equal work.

French feminist Niki de Saint Phalle created bright sculptures of women that embodied joy in a “defiant and rebellious way.” Take a look at some of her most famous pieces, including the L’Oiseau Amoureux that sold for an excess of $600,000 in 2020.