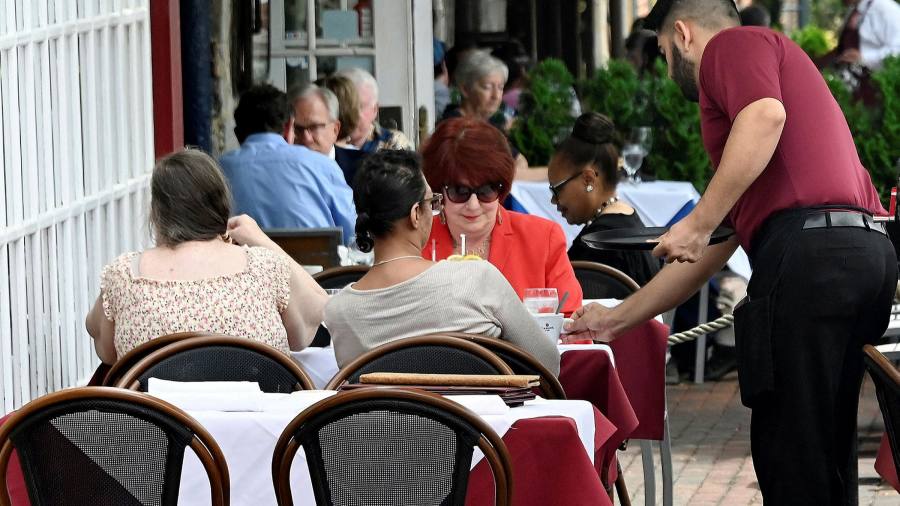 US jobs market powers ahead

A much stronger than expected US jobs report has damped fears of recession in the world’s largest economy and fuelled expectations of more aggressive interest rate rises from the Federal Reserve.

Non-farm payrolls grew by 372,000 in June, leaving the unemployment rate at a historically low level of 3.6 per cent, just short of its pre-pandemic position. The red-hot labour market remains the bright spot for policymakers as growth slows and consumers start to rein in spending.

Average hourly earnings also edged up but the number of Americans either in work or actively looking dipped to 62.2 per cent, still shy of pre-pandemic levels.

Wider trends in the US labour market are also becoming more apparent.

Ellen Zentner, chief US economist at Morgan Stanley, has argued in the Financial Times that recent increases in wage deals are here to stay as labour takes an increasing share of corporate income.

Workers are certainly more prepared to flex their muscles, helped by Jennifer Abruzzo, President Joe Biden’s top labour lawyer, who told the FT this week of her intentions to restrain some of the anti-trade union policies of the country’s biggest employers.

Union leaders have complained for decades that businesses have too much power over their workers, but interest in joining unions has surged as the tight labour market and a more welcoming government — Biden calls himself “the most pro-union president leading the most pro-union administration in American history” — have given workers greater bargaining power.

One route to mitigate labour shortages is for families to be able to access cheap and flexible childcare, says columnist Rana Foroohar. Women aren’t going back into the workforce at the same rate they did before the pandemic, she notes, putting the US very much at odds with the rest of the rich world.

Another route is to loosen job requirements so that those with a criminal record can re-enter the workforce, a trend that is beginning to catch on with employers in Canada as well as the US.

The euro came close to parity with the dollar for the first time in two decades as concerns grew over the European economic outlook. Minutes from the European Central Bank’s June policy meeting showed some policymakers think it may need to raise interest rates more aggressively than planned.

Germany is rationing hot water, dimming street lights and closing swimming pools as the energy crunch spreads from industry following the huge increase in gas prices, which Goldman Sachs said yesterday had put the eurozone “on the edge of recession”.

The drama is (almost) over. The UK will have a new prime minister by September after Boris Johnson announced he would quit. But business is agitating for swifter action to restore confidence in the British economy.

Underscoring the scale of the challenge, the Office for Budget Responsibility said the country’s public finances were on an “unsustainable” path, denting any new premier’s hope of cutting taxes. Economics editor Chris Giles gets his advice in early: “Cutting taxes does not magically boost economic performance. Any politician suggesting otherwise is lying to you.”

“Unsustainable” is not something that seems to apply to UK house prices, which new data showed rose in June at the fastest rate in 18 years, driving the typical UK house price to a record £294,845. Homebuilder Vistry said demand remained robust.

One of the key tasks for Johnson’s successor is to reset relations with Europe, writes Timothy Garton Ash, professor of European Studies at Oxford university. The task will not be easy, notes Peter Foster in his Britain after Brexit newsletter, quoting one Brussels insider: “They’re crazy, the lot of them. We’ve given up on them long ago.”

The UK unveiled its biggest round of clean energy subsidies (aka “contracts for difference”) including for offshore wind, which has become the country’s cheapest form of clean energy, beating solar and onshore wind.

In its first climate stress test, the ECB said today that eurozone banks had underestimated short-term losses from climate change, putting the total at €70bn.

Russia is taking greater state control of private business and the workforce, as it signalled it was preparing for the long haul in its battle to control Ukraine. Moscow is introducing new powers to force businesses to fulfil state defence contracts as well as change their terms. The long-term Russian love affair with the London property market meanwhile is finally over.

The reconstruction plan for Ukraine is right to focus on the need to “build back better” and prepare the way for EU membership, says FT commentator Martin Sandbu.

Two senior Fed officials warned of the “significant risk” to the US economy from soaring inflation, minutes from the last Fed policy meeting revealed. It will decide whether to raise rates by 0.50 or 0.75 percentage points at its meeting this month.

Rolls-Royce said it was seeing early signs of a recovery in demand for new large aircraft from airlines. Meanwhile, airline and tour operator Jet2 warned UK airports were “woefully ill-prepared” for the holiday season, as easyJet’s business model is coming under fire. However, a damaging summer strike involving BA check-in staff at Heathrow has been called off.

SMBC Capital Aviation, one of the world’s biggest aircraft lessors, announced a $1.6bn write-off to cover the loss of 34 of its planes stuck in Russia following the invasion of Ukraine. It said it was “unlikely” that it would be able to recover the aircraft “within a reasonable timeframe, or at all”.

There may be plenty of reason for governments to intervene in highly uncertain times for the global economy, but the US focus on centralised state spending to keep or create manufacturing at home is rarely the best way to do it, argues Alan Beattie in the Trade Secrets newsletter.

Shell said it would revise up the value of its oil and gas assets after raising its long-term outlook for commodity prices. It now expects the 2023 price for Brent crude, Europe’s benchmark, to hit $80 a barrel. The company will reverse up to $4.5bn in writedowns previously taken on the value of those assets.

China’s progress in developing a homegrown messenger RNA vaccine, seen as essential to any shift away from Beijing’s zero-Covid policy, risks being outrun by rapid mutations of the Omicron variant.

More than two years into the pandemic, policymakers are rethinking their approach to vaccines to take into account different levels of immunity through infections and shots.

The US has begun the vaccination of under-5s, becoming the first major western nation to do so. The programme will be closely watched elsewhere as regulators consider approving shots in the next few weeks.

Although the number of severe cases has dropped, the sheer volume of coronavirus infections means hundreds of thousands of people are unwell for the long-term. John Burn-Murdoch looks at long Covid and its effect on the labour force as UK infections continue to rise, according to official data published today.

“One consequence of tribalism is that we rarely examine in detail any of the reasons that we believe anything,” says columnist Tim Harford. So how can we actually change someone’s mind?

FT Asset Management — The inside story on the movers and shakers behind a multitrillion-dollar industry. Sign up here