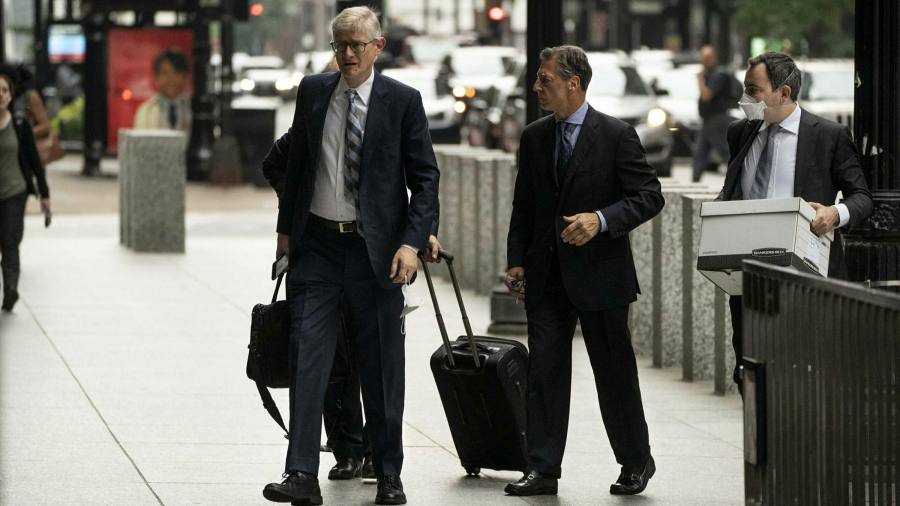 The comments came at the start of a trial that is a reminder of the misconduct that blighted metals markets between 2008 and 2016, and resulted in stiff penalties for several banks by US authorities, including a $920mn fine for JPMorgan in 2020.

Federal prosecutors have charged Michael Nowak, Jeffrey Ruffo and Gregg Smith with racketeering, wire fraud, spoofing and commodities fraud. Spoofing, which was outlawed in the US in 2010 by the Dodd-Frank Act, is the practice of quickly placing and withdrawing buy and sell orders to create a false impression of demand.

“In order to make more money for themselves, they decided to cheat to get better prices,” said assistant US attorney Lucy Jennings.

During opening arguments on Friday, prosecutors described how the defendants allegedly used the anonymity of electronic futures trading on the Chicago Mercantile Exchange to trick traders on the other side of their alleged fake trades for more than seven years. The traders’ spoofs “represented 50 to 70 per cent of the visible gold and silver markets at a particular time”, Jennings said.

But lawyers for the defendants said no such pattern existed, and that prosecutors had “cherry-picked” examples to try to prove spoofing had taken place. They said the difference between lawful and illegal trades came down to defendants’ intent and what they were thinking, something the prosecution could not possibly prove.

The three men have pleaded not guilty to the charges, which were filed in 2019. If convicted, they face up to 20 years in prison for each charge of which they are found guilty. Nowak oversaw JPMorgan’s global precious metals trading desk, and Smith worked as a trader and executive director in New York. Ruffo worked in sales in New York.

Another defendant, Christopher Jordan, will be tried separately.

The case centres on the trading of thousands of futures contracts for precious metals such as gold, silver and platinum. In the indictment, the DoJ alleges the group of traders concocted illegal trading strategies, including spoofing, to gain an edge over algorithmic traders.

The prosecution claimed Nowak and Smith flooded the market with huge volumes of trades — both buys and sales — that they never intended to execute in order to get the desired price for Ruffo’s clients.

Two former JPMorgan traders have already pleaded guilty to spoofing in the precious metals markets, while two former Bank of America traders last year were convicted for wire fraud in a similar case.

Among the charges against the defendants are violations of the Racketeer Influenced and Corrupt Organizations Act, or Rico, a federal law enacted in 1970 to pursue organised crime.

Over the years, the DoJ has broadened the scope of the types of crimes prosecuted under Rico to include white-collar crime. More recently, it has been used to target banks and bankers.

Aitan Goelman, partner at Zuckerman Spaeder and a former director at the US Commodity Futures Trading Commission, said it was “unprecedented” for the DoJ to allege JPMorgan’s metals desk was a racketeering enterprise.

“I think that that’s a significant expansion of the department’s use of Rico,” Goelman said.

Samuel Buell, a professor at Duke University School of Law, said: “It’s not common to use Rico in these kinds of cases. Rico’s more of a kind of umbrella device that has procedural benefits for prosecutors” that “make it easier to join charges and defendants into a single case”.

The use of the statute in a financial case “sends a message that the DoJ is taking a hard line on white-collar defendants”, said John Zach, partner at Boies Schiller Flexner and a former federal prosecutor in the Southern District of New York.