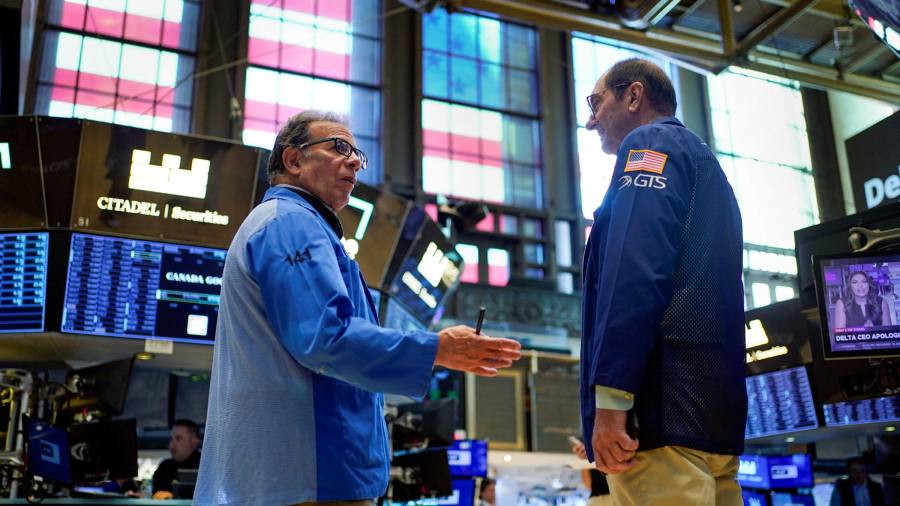 
Stock markets dipped and a sell-off in US government bonds continued on Wednesday afternoon after minutes from the Federal Reserve’s most recent meeting warned that the central bank could move to a “more restrictive” monetary policy to fight inflation.

The Fed last month raised its benchmark interest rate by 0.75 percentage points, the largest increase in almost 30 years, in an attempt to tame price rises. Minutes from the monetary policy committee meeting released on Wednesday said Fed officials were concerned that inflation “could become entrenched if the public began to question the resolve of the committee”.

The yield on the benchmark 10-year Treasury note, which rises when prices fall, was 0.11 percentage points higher at 2.92 per cent shortly after the minutes were released, having climbed about 0.09 percentage points earlier in the day.

The 10-year yield remained slightly below the yield on the shorter-dated two-year note after falling below it on Tuesday. Such a pattern — known as an inverted yield curve — is often seen as a warning sign of an impending recession.

The S&P 500 and Nasdaq Composite stock indices, which struggled for direction before the minutes were released, both fell 0.2 per cent.

Commodity and currency markets also highlighted growing recession fears on Wednesday, with Brent crude — the international oil benchmark — momentarily falling below $100 a barrel for the first time since April.

The euro also extended its recent losses, slumping as much as 1 per cent against the dollar to $1.016 — a move that took the common currency to less than $1.02 for the first time in two decades.

The dollar index, which measures the US currency against a basket of six others and which tends to strengthen during times of uncertainty, added a further 0.5 per cent after a strong rally on Tuesday.

“Continued [Federal Reserve] tightening amidst a global slowdown remains a very positive environment for the dollar,” wrote analysts at ING, who added that such an environment could lead the dollar index to “trade some 2 per cent higher, meaning that EUR/USD looks likely to drift towards parity this month”.

“1.00 is probably the biggest psychological level around in FX,” said ING, “and fireworks look likely” when it happens.

Data compiled by Nick Colas, co-founder of DataTrek Research, showed that dollar peaks correlated with the exact days of lows for the S&P 500 in 2009 and 2020.

“The dollar has given useful information at prior major US large-cap equity lows,” he said. “The fact that it continues to strengthen versus the euro, pound and other currencies tells us to expect further US equity volatility.”

Europe’s Stoxx 600 share gauge rallied 1.7 per cent on Wednesday, pushed up by a sharp rise in the shares of Just Eat Takeaway after Amazon agreed to take a 2 per cent stake in the company’s Grubhub arm, and by stronger-than-expected German industrial data.