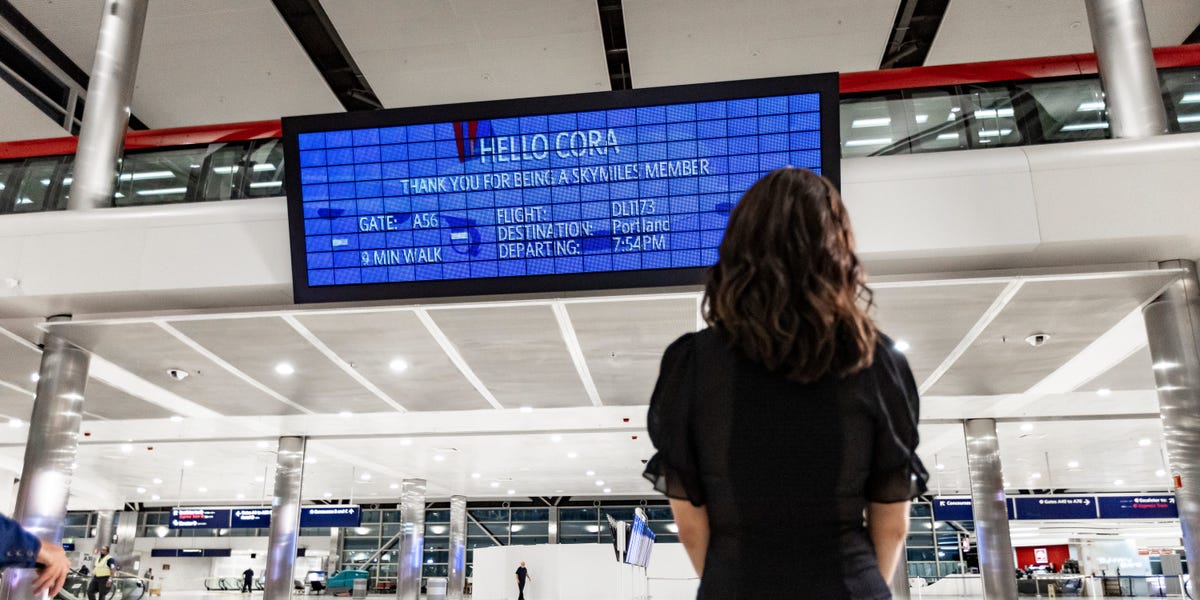 
It’s time to ditch the crumpled boarding passes and stop staring at thousands of flights on a board, because Delta just science-fictionalized the airport experience.

Through a partnership with California-based startup Misapplied Sciences, the airline has installed a flight information board in the Detroit airport that uses facial-recognition tech to simultaneously show several travelers personalized information about their flight.

While staring at the same screen — dubbed “Parallel Reality” — up to 100 people can see something entirely different. The screen shows each passenger their gate number, departure time, and even which direction to walk and how long it will take to get there.

Each pixel in the screen can send different colors of light in tens of thousands of directions — so while one person perceives one color, the person next to them can see another, the company says.

“It’s simply the tip of the iceberg,” Albert Ng, CEO of Misapplied Sciences, told Insider. “It’s a glimpse into what the future could look like.”

To quell privacy concerns, the screen won’t work for passengers who don’t opt-in to the experience.

“We are not ambiently detecting who you are as you’re walking through the airport,” he said.

Passengers can try it out either by scanning their boarding pass or using Delta’s digital ID facial-recognition system.

“A relationship is created between your identity and your position, so that the motion camera follows your shape,” Greg Forbes, Delta’s managing director of airport experience, told Insider. “That’s what tells the display which direction to aim your information. As you move through the viewing space, your location is tracked, and your message follows you.”

The technology only works in a viewing area in front of the screen, so as soon as a passenger leaves the area, their information is deleted, Forbes said. If you wanted to do it again, you’d have to go back to the kiosk and start from the beginning.

Right now, the screen is only available in Detroit’s airport. But both Forbes and Ng said they envision a number of different uses for it, from Sky Club lounges to places beyond the airport, like stadiums or other entertainment venues.