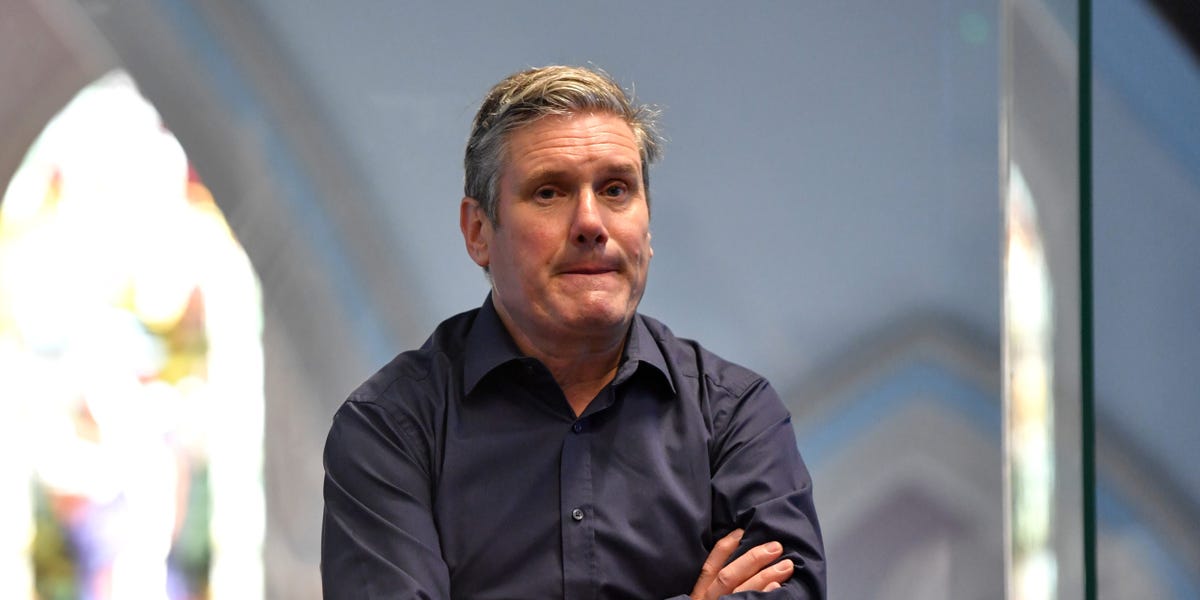 How Keir Starmer Became Mired in His Own Partygate Row


A little under a month ago,  Labour leader Keir Starmer made his boldest move yet.

As Boris Johnson and Rishi Sunak both received fines for attending a lockdown-busting birthday party for the prime minister, Starmer told the pair they had to go.

“They must both resign,” the rival politician said back in April. “The Conservatives are totally unfit to govern. Britain deserves better.”

However since then, Starmer has become mired in a row over his own attendance at an event that critics say broke the rules.

Now “beergate,” as it has become known, has the potential to be even more damaging for Labour, just as the leader was showing sustained progress in the polls.

In January, pictures emerged of Starmer drinking a beer during the Hartlepool by-election campaign on April 30, 2021. At the time, England was under ‘step two’ COVID rules, preventing people from socializing outside their household or support bubble.

Starmer has insisted throughout that it was a “work event,” and that the picture and video that later emerged were taken while he and the rest of his campaign team were taking a break from work in City of Durham MP Mary Foy’s office.

He added: “We were working in the office, it was just before elections, we were busy, we paused for food … there was no party, no rules were broken, that is the long and the short of it.”

But on Friday morning — as the results of England’s local elections were still being counted — Durham Police announced it had launched a probe following “significant new information.”

Why has it become an issue now?

The Conservative MP for North West Durham Richard Holden accused Starmer of hypocrisy, and lying, as he called for the local police to look again at the incident.

“Does anyone really believe that 30 people drinking beer and tucking into curry at 10pm on a Friday is a work meeting?,” he tweeted, referencing reports from The Sun that an Indian takeout meal was also ordered.

Holden told LBC radio that Starmer, a former director of public prosecutions, should face the same scrutiny as others, saying: “I am just asking for equality in the law.”

“Labour’s story has changed over the last few months since the police first looked at this. First of all Angela Rayner … wasn’t there, now she definitely was but only because newspapers provided evidence of that.

Nadine Dorries, the culture secretary and one of Johnson’s most vocal supporters, also joined calls for the police to investigate.

“Did all 30 really go back to work after they finished their biryanis [a type of curry]? If not, they have breached the rules and police should investigate,” she said.

“Beergate” has also led to tensions between backbench MPs.

Labour’s Mary Kelly Foy — the City of Durham MP in whose office Starmer was pictured drinking a beer — is accused of having verbally abused Holden at a bar in parliament over the row.

In a statement, Holden said he had accepted a “wholehearted apology from Ms Foy,” who he said had “unprovoked … drunkenly approached, berated and grabbed me.”

A Labour source told The Independent there had been a “bit of back and forth about politics generally,” but confirmed Foy had apologised “in good faith.”

How damaging could ‘beergate’ be for Keir Starmer?

Ahead of the local elections, Tories were pushing the argument that Starmer is just as bad as Johnson — if not worse.

But the latest polling suggests that it hasn’t cut through to the extent they’d like to see.

A YouGov survey has found that “beergate” hasn’t changed the dial: 42% of respondents said they believed Starmer had generally abided by COVID rules, while 70% said Johnson generally didn’t.

But Starmer has a bigger problem about connecting with the public as he looks to rebuild trust following the 2019 election, in which voters turned away from his predecessor Jeremy Corbyn.

The Sun and the Mail have covered the story extensively, reaching the kind of Red Wall voters that Starmer needs if he is going to turn his party’s fortunes around.

While Starmer attempts to win back former voters, he is struggling with a fractious party and ebbing union support.

MPs on both sides have told Insider they believe “beergate” has the potential to be damaging for Labour, but rather than encouraging voters to return to Tories, some fear it could result in a “plague on both houses” attitude.

Will Starmer be fined for beergate?

At the moment, the jury’s out.

Emily Thornberry, the shadow attorney general, refused to contemplate the possibility that the Labour leader will be fined, and whether he might resign if so.

But it could be terminal. Already vulnerable, having come out in the strongest terms against Johnson and Sunak, Starmer will face claims of hypocrisy.

But even if he isn’t, things will get tougher from here. Starmer can no longer use partygate as a killer line during his weekly joust with the prime minister at PMQs. In the public’s eyes, it has the potential to level the field. And if Johnson is fined but Starmer isn’t, some may claim it’s a stitch up.

Johnson has made it clear he won’t resign. But as a former DPP and leader whose reputation rests largely on being honorable, it could become tough for Starmer not to fall on his own sword.

If he doesn’t, he may find a queue of people — including some from his own party — willing to finish him off.