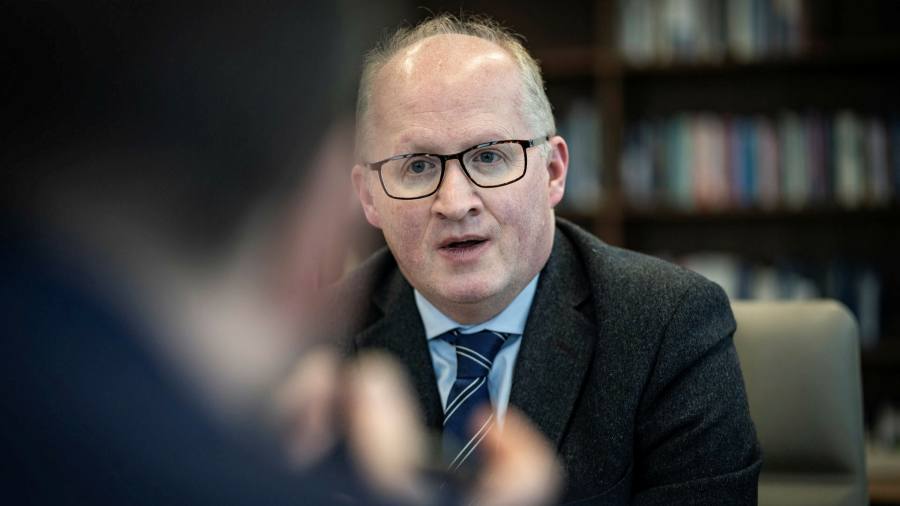 Momentum is building for the European Central Bank to raise interest rates in July to fight soaring inflation, after dovish policymakers indicated they were ready to accept an end to almost eight years of negative borrowing costs.

ECB chief economist Philip Lane and executive board member Fabio Panetta have signalled they are more open to raising rates in the coming months, following calls from the governing council’s hawks to make the first rise in more than a decade sooner rather than later.

Lane, seen as one of the rate-setting council’s more dovish members, said yesterday: “It is clear that at some point we are going to be moving rates not just once, but over time in a sequence.”

The shift comes after eurozone inflation hit a record 7.5 per cent in April and brings the ECB closer in line with the Federal Reserve and the Bank of England, which both raised rates this week.

The ECB has set borrowing costs below zero since June 2014, when it was fighting Europe’s debt crisis. The deposit rate is now minus 0.5 per cent, but many economists expect a 0.25 percentage point rise to minus 0.25 per cent at the July meeting.

Thanks for reading FirstFT Europe/Africa. Here’s the rest of the day’s news — George

1. BoE faces biggest inflation challenge With UK prices likely to rise at their fastest rates in more than 40 years and sustained double-digit inflation feasible for the first time since the 1970s, former officials and economists said the Bank of England faces challenges it has not encountered since the central bank gained independence 25 years ago.

2. Abramovich denies ‘reneging’ on Chelsea debt pledge Roman Abramovich has denied demanding personal repayment of £1.5bn of debt owed by Chelsea, as US investors closed in on buying the London football club. The statement followed a report that raised fears Abramovich was trying to “renege” on a pledge not to ask the loan to be repaid.

3. US Congress urged over stablecoin rules Pat Toomey, the top Republican on the Senate banking committee, has sounded the alarm over the fast-growing stablecoin industry, warning that “bad things will happen” unless the $180bn market in popular cryptocurrencies is regulated soon.

5. Nasdaq closes down 5% in sharpest fall since 2020 Wall Street closed sharply lower yesterday, an abrupt reversal from the rally in the previous trading session, as the Nasdaq fell 5 per cent, its biggest one-day decline since June 2020. The blue-chip S&P 500 index slid 3.5 per cent.

In less than 48 hours, you can hear Henry Kissinger, Chimamanda Ngozi Adichie and more at our inaugural US FTWeekend Festival, tomorrow in Washington. We look forward to exploring the global perspective on the ideas and issues of the day with an array of thinkers, writers, artists, chefs, performers and more. As a newsletter subscriber claim an exclusive limited-time offer of 50% off your pass using promo code FTNewslettersxFTWF22.

Francesca McDonagh: banker with ‘steel in her spine’ Irish bank executive Francesca McDonagh will need every ounce of the toughness she has a reputation for in her next job. She is jumping ship from chief executive of Bank of Ireland to become head of Europe, Middle East and Africa at Credit Suisse, one of Europe’s most accident-prone financial institutions.

Are UK workers getting sick of presenteeism? The coronavirus pandemic came after more than two decades of steadily falling absence rates among UK employees. In part, says Helen Thomas, this was down to employers cracking down on unwarranted leave. But it was also due to presenteeism, or turning up to work while ill.

Nasa tackles asteroid strikes The existential threat from asteroids and comets, portrayed in films such as Armageddon and Don’t Look Up, has been known since scientists showed in the 1980s that an impact 65mn years ago wiped out the dinosaurs. Now, Nasa is preparing to smash a spacecraft into a faraway asteroid at 23,000kph to divert its path.

When history is weaponised for war Bad history can kill, Simon Schama writes in our Weekend Essay. In July 2021, Vladimir Putin, in his own wannabe professor mode, published a lengthy screed, “On the Historical Unity of Russians and Ukrainians”, which manages to be stupefyingly dull while also exhaustively untrue.

How Rivian’s chief executive became the anti-Elon The electric truckmaker’s RJ Scaringe has no interest in Mars, rockets, building tunnels or Twitter, either to use or to own. He has shied away from using Elon Musk’s playbook in his battle with Ford and Tesla.

The battle for supremacy in the vegan food market has taken a new turn with a legal row over a protein molecule designed to make plant products taste like beef burgers. Food executives are closely watching the patent dispute between US companies Impossible Foods and Motif FoodWorks.

Is the Market Feeding The Bears Technology Stocks?