Buy And Hold Investing. Is It A One Size Fits All Solution?


“Buy and hold” investing. Is it truly a “one size fits all solution” to the investing conundrum? Or are there other considerations that would make such a solution less optimal?

I ask the question due to an email I received recently from one of the large Wall Street firms.

“Despite the tumble to begin this year, investors should not panic. Over the long-term course of the markets, investors who have remained patient have been rewarded. Since 1900, the average return to investors has been almost 10% annually…our advice is to remain invested, avoid making drastic movements in your portfolio, and ignore the volatility.”

As shown in the chart below, the advice given is not entirely wrong. Since 1900, the markets have averaged roughly 10% annually (including dividends). However, that figure falls to 8.08% when adjusting for inflation. 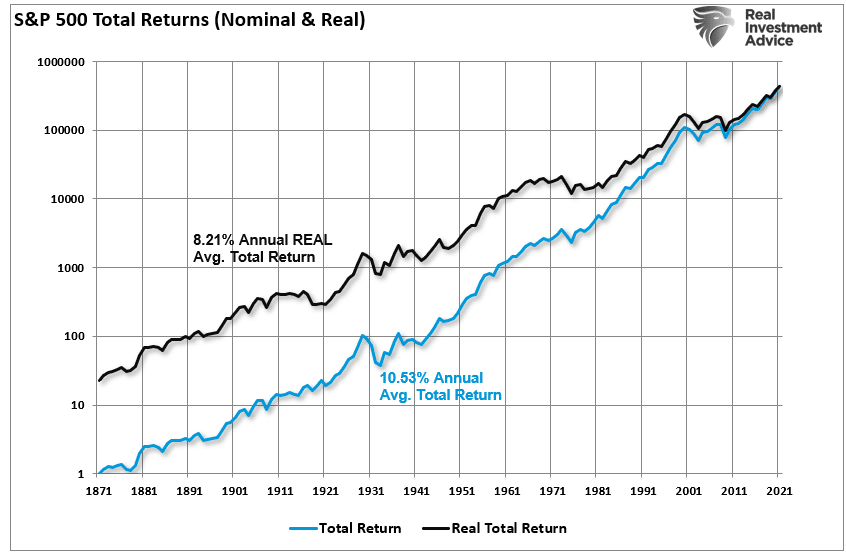 By looking at the chart above, it’s pretty evident that you should invest heavily in the market and “fughetta’ bout’ it.”

If it was only that simple.

While the average rate of return may have been 10% over the long term, the markets do not deliver 10% every year. Let’s assume an investor wants to compound their returns by 10% a year over 5-years. We can do some basic math.

After three straight years of 10% returns, a drawdown of just 10% cuts the average annual compound growth rate by 50%. Furthermore, it then requires a 30% return to regain the average rate of return required.

There is a significant difference between AVERAGE and ACTUAL returns. The impact of losses destroys the annualized “compounding” effect of money.

To prove that, the purple shaded area shows the “average” return of 7% annually. However, the differential between the promised and “actual return” is the return gap. See the problem? 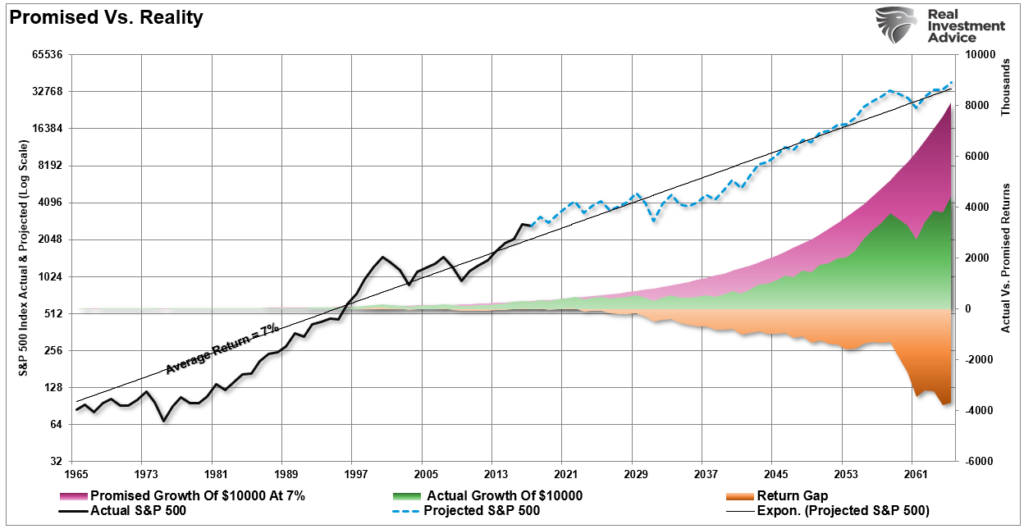 The differential between what investors were promised (and a critical flaw in financial planning) and actual returns are substantial over the long term.

Secondly, and most importantly, you DIED long before you realized the long-term average rate of return.

The chart box below shows a $1000 investment for various starting periods. The total return holding period is from 35-years until death using actuarial tables. There are no withdrawals. The “promise” of 6% annualized compound returns is the orange sloping line. The black line represents what occurred. The bottom bar chart shows the surplus, or shortfall, of the 6% annualized return goal. 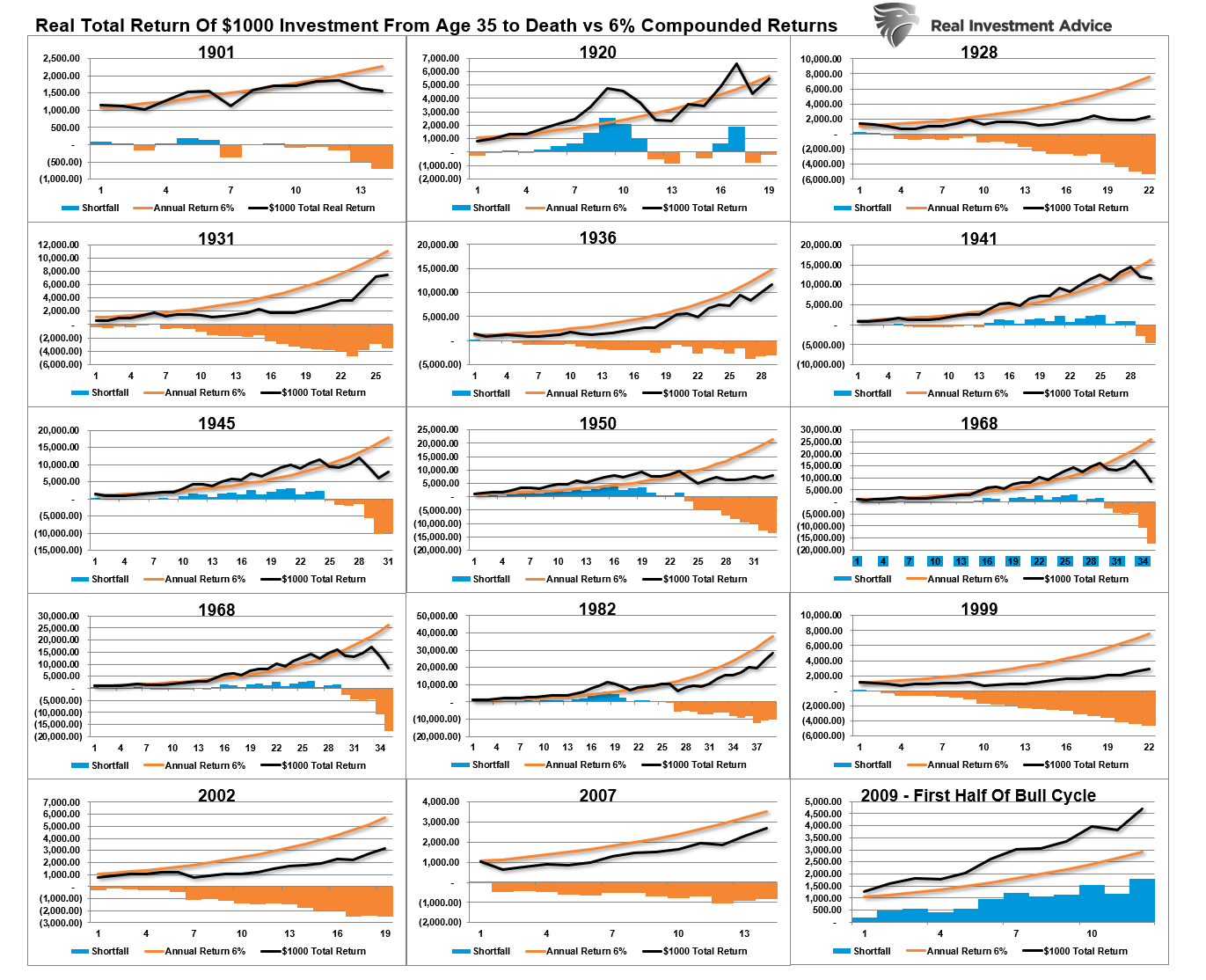 At the point of death, the invested capital is short of the promised goal in every case except the current cycle starting in 2009. However, that cycle is yet to be complete, and the next significant downturn will likely reverse most, in not all, of those gains.

The Problem With Long-Term

Such is why using “compounded” or “average” rates of return in financial planning often leads to disappointment.

Let’s consider the following facts in regards to the average American. The national average wage index for 2020 is $55,628.60, lower than the $62,000 needed to maintain a family of four today.

Assuming that the average retired couple will need $40,000 a year to live through their “golden years,” they will need roughly $1 million, generating 4% a year in income. Since approximately 90% of Americans have saved less than one to two years of annual income, funding retirement could be problematic.

While many suggest the “buy and hold” investing will work over the long term, for most, that period is roughly 15-20 years until retirement.

Here is the problem.

There are periods in history where returns over 10-year periods were negative. 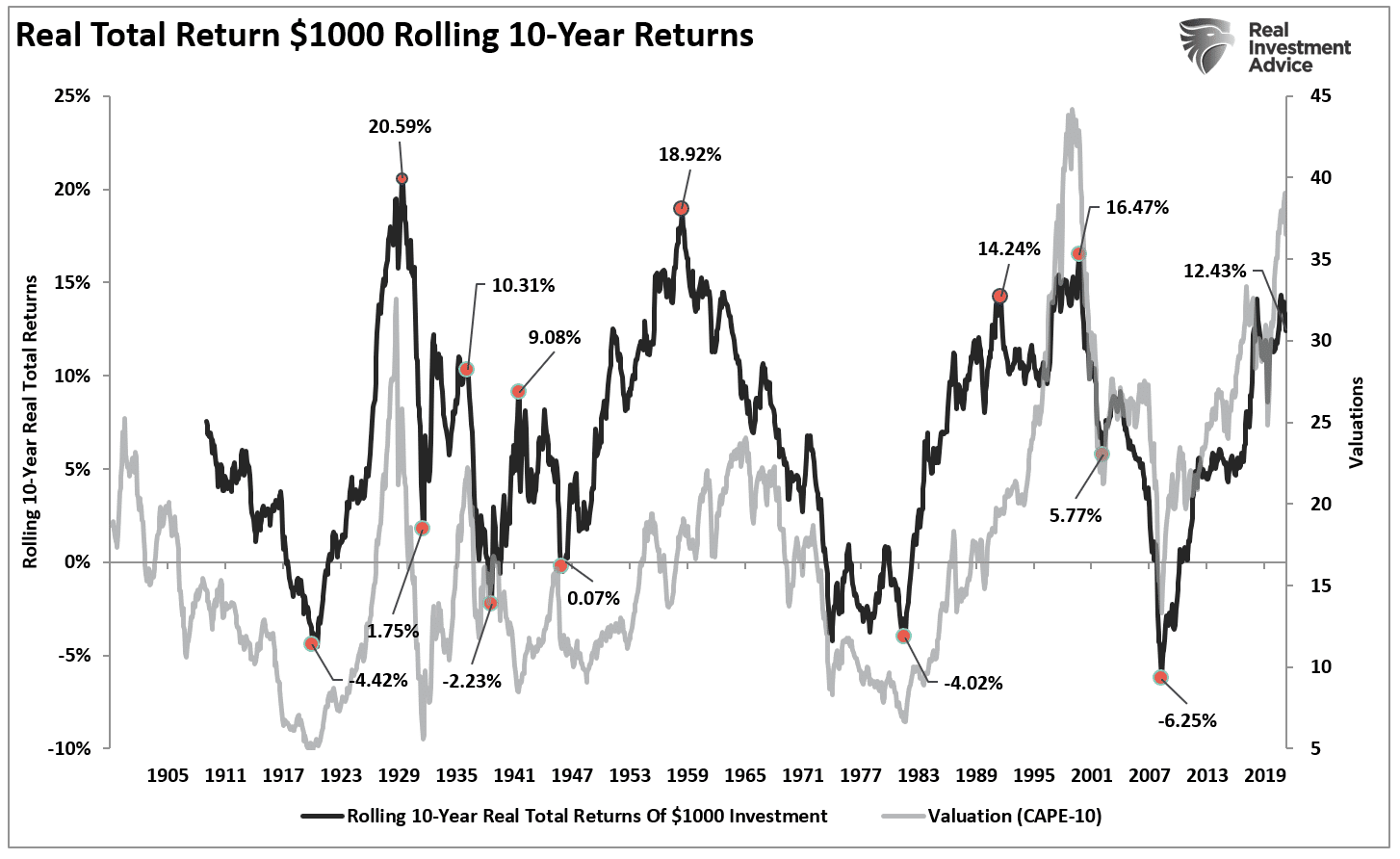 Yes, “buy and hold” investing will work, but it depends on WHEN you start your investing journey. At 35x CAPE, such suggests that returns over the next 10-20 years could be disappointing. 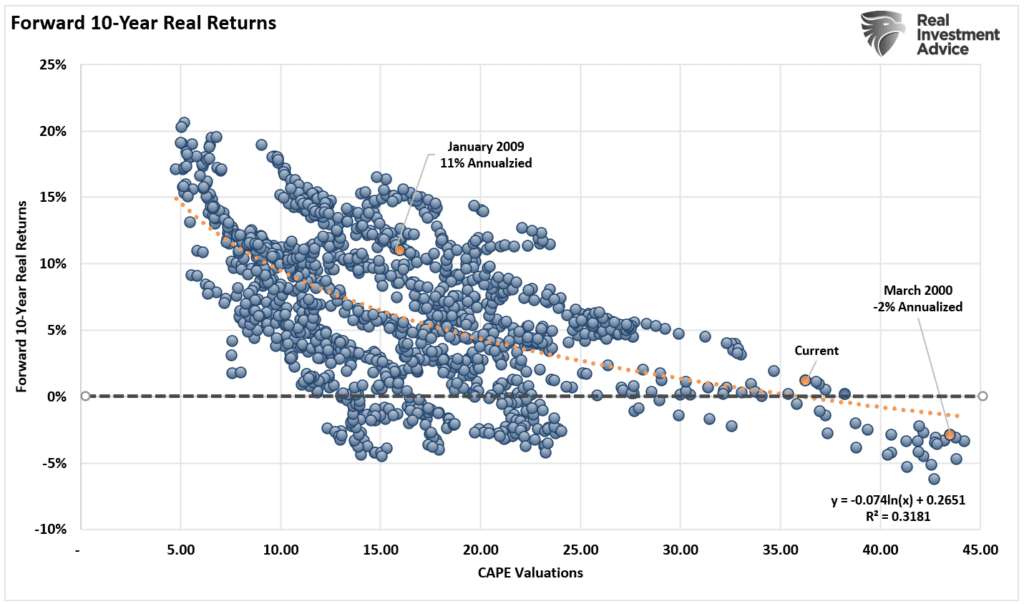 The MAJORITY of the returns from investing came in just 5 of the 9-major market cycles since 1871. Every other period yielded a return that lost out to inflation during that time frame. 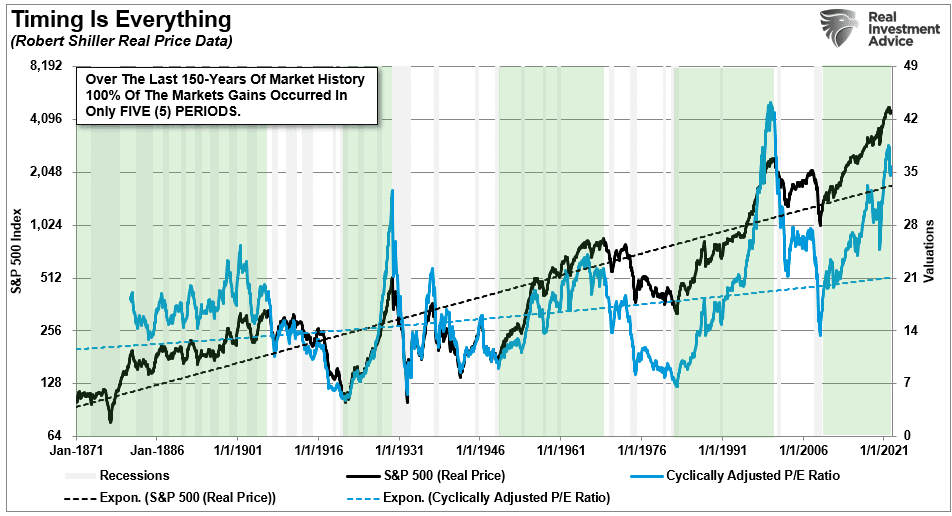 With this in mind, this is where the email went awry with selective data mining:

“Among the key findings: On average, participants who kept contributing to their retirement plans throughout the 18-month period (October 2008–March 2010) had higher account balances than those who stopped contributing; Participants who maintained a portion of their retirement plan asset in equities throughout the entire period ended up with higher account balances than those who reduced their equity exposure amid the peak period of market distress.

Thus, retirement investors who kept contributing to their plan and who maintained some exposure to equities throughout the period were better off throughout the market’s 18-month bust-boom period than those who moved in and out of the market in an attempt to avoid losses.”

The main problem is selecting the start and ending period of October 2008 through March 2010. As you can see, the PEAK of the financial market occurred a full year earlier, in October 2007. Picking a data point nearly 3/4ths of the way through the financial crisis is egregious.

It took investors almost SEVEN years to get “back to even ” on an “inflation-adjusted basis.”

Every successful investor in history, from Benjamin Graham to Warren Buffett, has particular investing rules that they follow. Yet Wall Street tells investors they can NOT successfully manage their own money, and “buy and hold” investing is the only solution.

More importantly, if it worked as stated, why are 80% of Americans broke instead of rich?

Buy And Hold Works, Until It Doesn’t.

“buy and hold” investing works well during strongly trending market advances. Given enough time, the strategy will endure the eventual market downturn. However, three key considerations must get considered when endeavoring into such a strategy.

Suppose valuations are high at the beginning of the investment journey. If the time horizon is too short or the required rate of return is too high, the outcome of a “buy and hold” strategy will most likely disappoint expectations.

Mean reverting events expose the fallacies of “buy-and-hold” investment strategies. The “stock market” is NOT the same as a “high yield savings account,” and losses devastate retirement plans. (Ask any “boomer” who went through the dot.com crash or the financial crisis.”)

Therefore, during periods of excessively high valuations, investors should consider opting for more “active” strategies with the goal of capital preservation.

Before engaging in a “buy and hold” investment strategy, the analysis reveals essential points to consider:

There is no “one best way to invest.”

Every investor must account for the myriad of variables that will impact their investment returns and financial goals over time. Most importantly, investors must realize that surviving the eventual bear market is more important than chasing the bull market.

The “best way to invest” is navigating the entire market cycle between when you start investing and when you need your capital.

“Buy and hold” strategies are the “best way” to invest until they aren’t.

Just make sure you know where you are within a given market cycle to increase your odds of success.