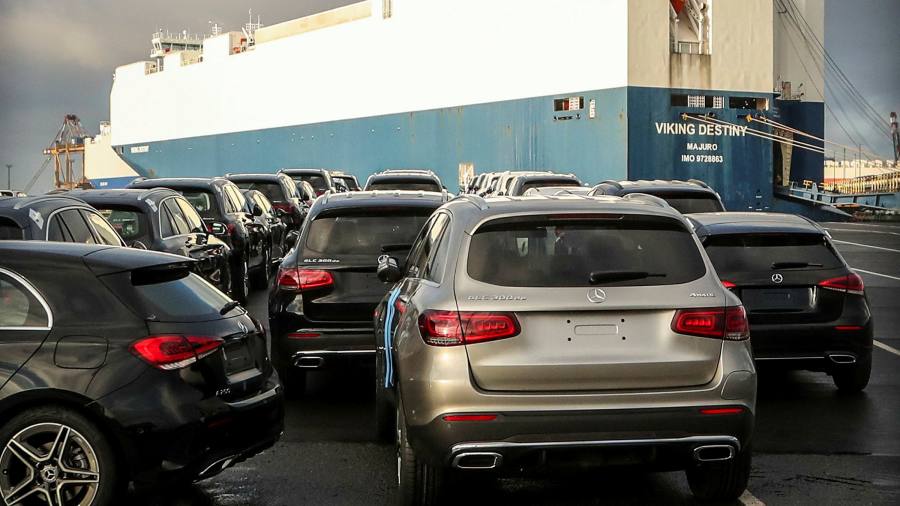 
Trade between Germany and the UK has dropped sharply since 2016 and lags behind overall import and export levels in both countries, in a sign that British manufacturing is facing increased hurdles in its interactions with the EU’s biggest economy.

German goods exports to the UK fell 3.9 per cent in March compared with the previous month, and were down 0.3 per cent from the same month last year. Compared with March 2019, exports to Britain were down 27 per cent, even though Germany’s overall exports grew by 16 per cent, according to data released on Wednesday by Destatis, the German office for national statistics.

The UK was the only major German trading partner reporting a contraction in exports compared with March 2016, three months before the Brexit referendum.

Ulrich Hoppe, director-general of the German-British Chamber of Industry and Commerce, said the figures reflected the gradual decoupling of the UK manufacturing economy from the EU single market.

“From a German perspective, the UK is to some extent being taken out of EU supply chains . . . because it has become more complex and expensive [to trade with UK] and that has an effect on bilateral trade,” he said.

Germany is Britain’s second-largest trading partner after the US, and trade between the two countries supports more than 500,000 jobs in the UK, according to official estimates.

But the UK dropped to 13th as a source of German imports in 2021, behind Spain, Switzerland and Austria — down from ninth position in 2016. It also fell to the bottom of Germany’s top 10 trading partners for both exports and imports, with the Czech Republic about to overtake the UK.

Hoppe said the chamber’s members cited logistical problems related to Brexit as the biggest concern of German companies in the UK in a 2022 business outlook survey.

The weakening of bilateral trade is mirrored in the UK’s official statistics. British goods exports to Germany were down 10 per cent last year compared with 2020, while overall UK exports were up 9 per cent.

UK goods imports from Germany were also down in 2021, although overall imports were up. Services, which account for just over one-third of UK exports to Germany, and about 14 per cent of imports, were also down last year.

William Bain, head of trade policy at the British Chambers of Commerce, said German-UK trade figures “paint a consistently alarming picture”, as volumes are not recovering in the same way as they are for other countries in the wake of the pandemic.

“As costs of exporting from Germany to the UK, and vice versa, have gone up since the [EU-UK] Trade and Cooperation Agreement came into effect there has been a clear drop in bilateral trade volumes, particularly among smaller businesses,” said Bain.

Sophie Hale, trade economist at the Resolution Foundation, a think-tank, noted that the UK share of Germany’s imports fell significantly in 2021 following the implementation of the TCA, but that it was already on a downward trend in the previous years. “Brexit has clearly had an impact,” she said.

The composition of bilateral trade may also have had a negative effect. Cars and other road vehicles, which were hit by pandemic-related supply chain disruption, are the main goods imported into the UK from Germany and have dropped sharply during the past five years, according to ONS data.

Similarly, aircraft components comprise a large proportion of British exported goods to Germany and were heavily hit by the pandemic, declining nearly 30 per cent since 2019.

However, Hale noted a declining share of UK goods in German imports across most categories of goods and some economists warn that the new trade agreement with the EU will have long-lasting effects.

“The erosion of trade ties caused by the Trade and Cooperation Agreement is likely to be permanent, as firms struggle with the additional red tape created by the UK leaving the single market and customs union,” said Thomas Sampson, associate professor of economics at the London School of Economics.

Bitcoin Will Use Any Type Of Energy It Wants