Shareholders in travel group Norwegian Cruise Line (NYSE:) have seen the value of their investment drop around 35.3% over the past 52 weeks and approximately 6.9% so far this year. By comparison, shares of its cruise industry peers, Carnival (NYSE:) and Royal Caribbean (NYSE:), have lost 16.4% and 1.6% since January, respectively. 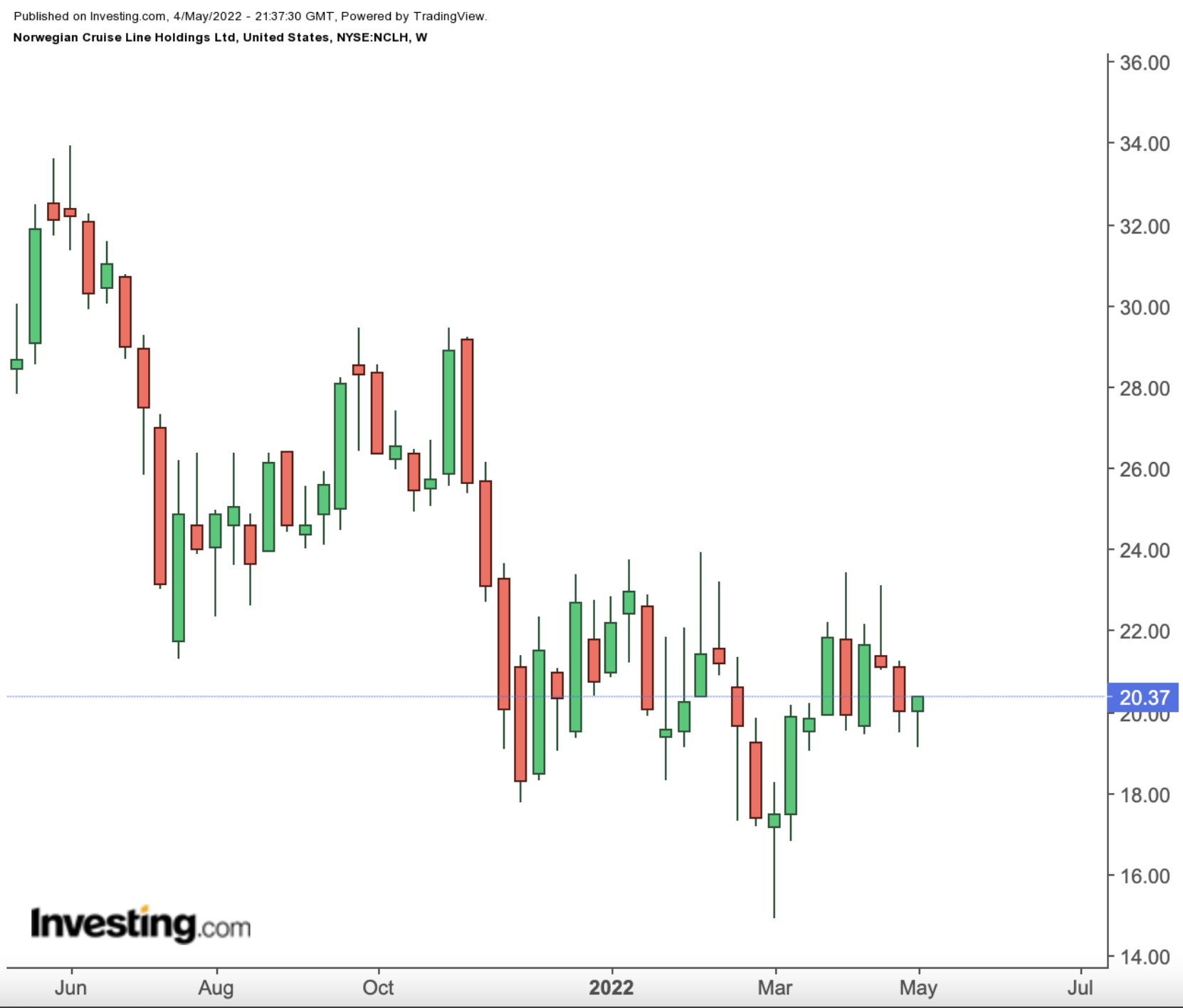 Yet, there is increased optimism that industry players can bounce back before long. Readers may be interested to know that Carnival currently has a global market share of around 45%, followed by Royal Caribbean (25%) and Norwegian (9%).

“We launched our Great Cruise Comeback in late July 2021 and in five short months, the teams at Norwegian Cruise Line, Oceania Cruises and Regent Seven Seas Cruises have restarted operations on 75% of our capacity, safely carrying over 230,000 guests.”

Management forecasts positive adjusted net income for the second half of this year. Prior to the release of the quarterly results, NCLH stock was around $17.50. Now, it is at $19.20, up roughly 10% since late February.

Next Move In NCLH Stock?

Among 17 analysts polled via Investing.com, NCLH shares have an “outperform” rating, with an average 12-month price target of $26.50. Such a move would imply an increase of well over 30% from the current level. The target range is between $19 and $38. 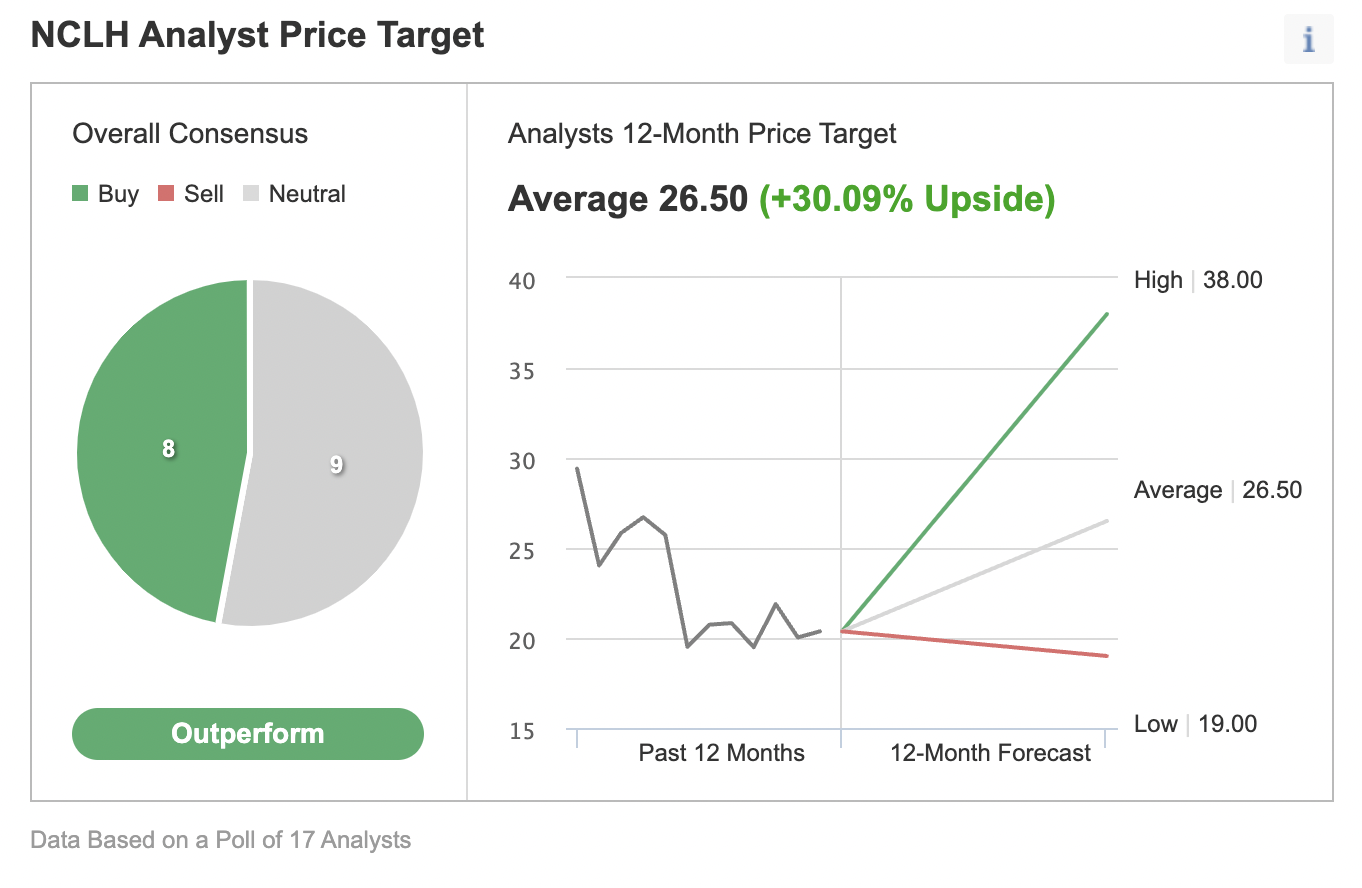 However, according to a number of valuation models, including P/E or P/S multiples or terminal values, the average fair value for NCLH stock at InvestingPro is $21.57, up about 12.5% from the current price. 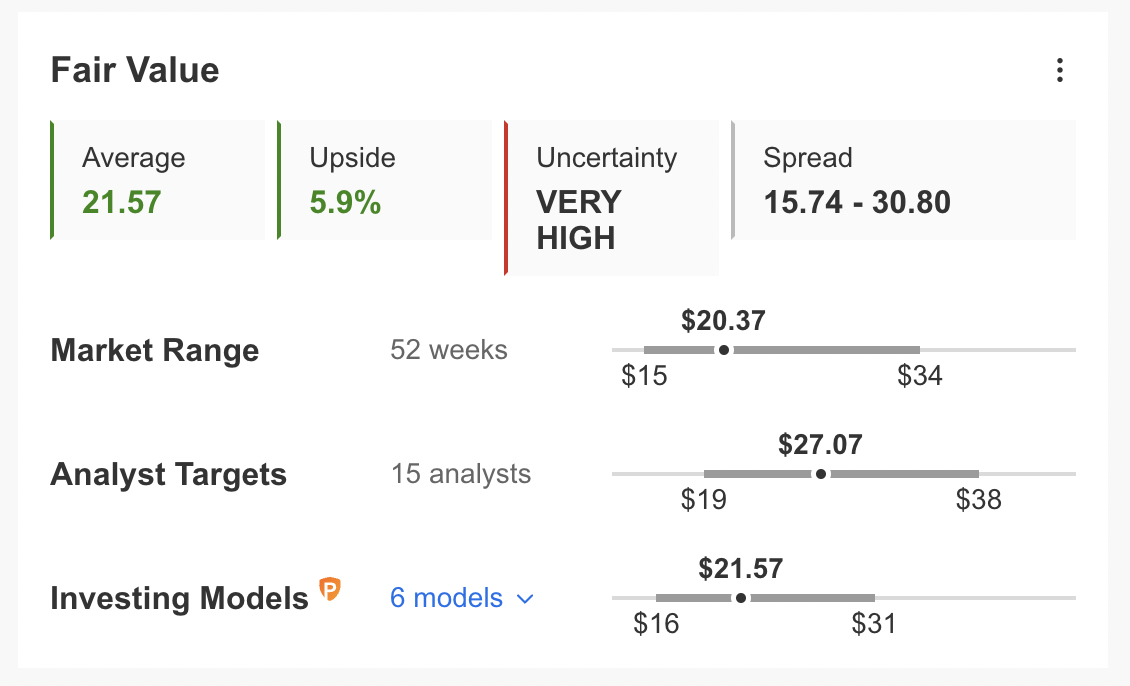 As part of the short-term sentiment analysis, it would be important to look at the implied volatility levels for Norwegian Cruise Line options as well. Implied volatility typically shows traders the market’s opinion of potential moves in a security, but it does not forecast the direction of the move.

Finally, readers who watch technical charts might be interested to know that a number of NCLH’s short- and intermediate-term oscillators are still urging investors to be cautious.

Norwegian Cruise Line will announce Q1 metrics on May 10. Our expectation is for NCLH stock to be volatile around that date.

However, we also expect the stock to find strong support at the $18 level. Although it might initially dip below that price, NCLH is likely to bounce back before too long. Afterward, NCLH stock would likely trade sideways while it establishes a new base.

NCLH bulls, who are not concerned about short-term volatility, could consider investing now. Their target price would be $21.57, as suggested by various valuation models.

Alternatively, investors might consider buying an exchange-traded fund (ETF) that has Norwegian Cruise Line stock as a holding. Examples include:

Finally, those who are experienced with options could also consider selling a cash-secured put option in Norwegian Cruise Line stock—a strategy we regularly cover. As it involves options, this setup is not appropriate for all investors.

Such a bullish trade could especially appeal to those who want to receive premiums (from put selling) or to possibly own NCLH shares for less than their current market price at $19.20.

This strategy may be appropriate when investors are slightly bullish or neutral on Norwegian Cruise Line stock at this time. Selling cash-secured put options on NCLH would generate income as the seller receives a premium.

For instance, if investors sold the $17.50 strike put that expires on June 17, they could collect about $1.15 in premium. Therefore, the maximum return for the seller on the day of expiry would be $115, excluding trading commissions and costs, if the option expires worthless.

But if the put option is in the money (meaning Norwegian Cruise Line stock is lower than the strike price of $17.50) any time before or at expiration on June 17, this put option can be assigned.

If the put seller gets assigned NCLH shares, the maximum risk is similar to that of stock ownership. In other words, the stock could theoretically fall to zero. But this risk is partially offset by the premium received ($115 for 100 shares).

Cash-secured put selling is a moderately more conservative strategy than buying shares of a company outright at the current market price. This can be a way to capitalize on any choppiness in Norwegian Cruise Line stock in the coming weeks, especially around earnings announcement.

Investors who end up owning NCLH shares as a result of selling puts could further consider setting up covered calls to increase the potential returns on their shares. Thus, selling cash-secured puts could be regarded as the first step in stock ownership.

Looking to get up to speed on your next idea? With InvestingPro+, you can find:

And a lot more. Get all the key data fast, so you can make an informed decision, with InvestingPro+. Learn More »

The yen: a cheap haven for uncertain times