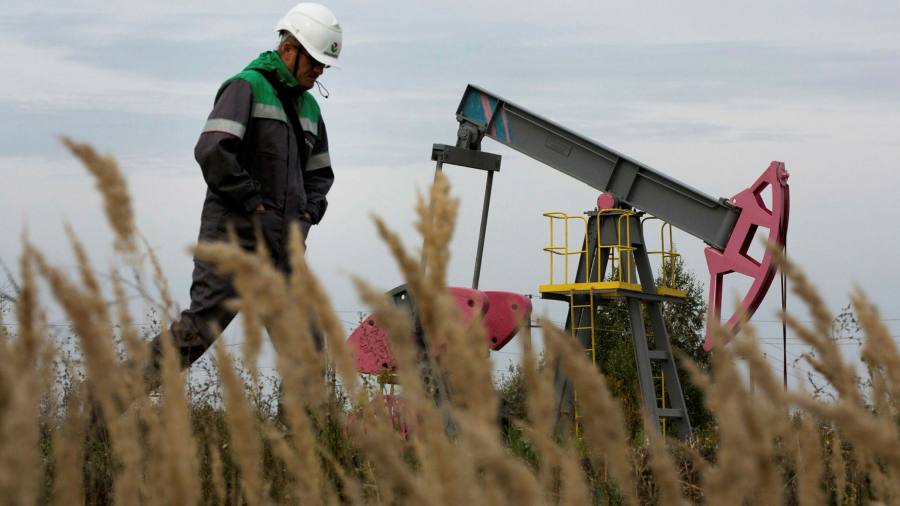 
The European Commission on Wednesday proposed one of the most sweeping changes to global energy flows in history. But the oil price barely responded.

Brent, the international benchmark, rose 3.8 per cent to around $109 after the commission proposed a phased-in ban on all imports of Russian crude and refined products into the EU.

Traders and analysts said the muted price response reflected the long-build up to the announcement, the phased-in approach, suppressed oil demand in China due to a resurgence of coronavirus and the price-calming impact of petroleum releases by the US and its allies. Brent has hovered at $100-$115 a barrel since the start of April.

“It’s a very small move on a momentous decision,” said Bjarne Schieldrop, chief commodities analyst at Swedish bank SEB. “If it hadn’t been for the Chinese lockdowns and the [strategic petroleum reserve] releases then the oil market reaction would have been much stronger.”

Since Russia invaded Ukraine in February, traders have been attempting to predict the extent of any long-term disruption to Russian energy flows and its impact on what was already a tight global oil market.

Immediately after the invasion, oil rallied to a 14-year-high of $139 a barrel as the US prepared its own ban on Russian imports. Prices then pulled back as Europe, particularly Germany, resisted EU-wide restrictions, even as many European companies began to shun Russian cargoes.

Concerns over a lockdown-induced drop in Chinese oil demand have had the biggest sway on crude prices since the start of April, said Amrita Sen, chief oil analyst at consultancy Energy Aspects.

“On a normal trading day we would be up 10-15 per cent but right now the issue is that . . . the market is genuinely very wary of the demand situation in China.” The country is the world’s biggest importer of crude oil.

Standard Chartered estimates that Chinese oil consumption fell due to recent Covid restrictions by as much as 1.1mn barrels per day in April — representing approximately 1 per cent of global demand — but that it will recover by July.

Other traders are worried that Chinese demand could drop by as much as 3-4mn b/d, approximately the same as the expected loss of production from Russia due to sanctions, according to Sen.

“I have had so many traders say to me, ‘oh but Russia just cancels China out,’” she said. “That’s not our view, but that’s absolutely the view in the market right now.”

Energy Aspects expects the Chinese Covid curbs to be shortlived with Chinese oil demand picking up again in May and returning to year-on-year growth from July, at which point it expects oil prices to rise sharply.

Prior to the war in Ukraine, Europe was the biggest recipient of oil from Russia — the world’s largest energy exporter — taking 2.2mn barrels a day of crude and 1.2mn b/d of refined products, according to the International Energy Agency.

However, European imports of Russian crude and refined products have already been falling due to self-imposed boycotts by companies and other consumers — another reason for the limited market response to the EU plans.

A previous round of EU sanctions is also due to come into force on May 15, which even without new measures from the bloc will stop European companies from buying crude and refined products from state-owned Russian companies, like Rosneft, unless “strictly necessarily”.

As a result, Vitol, the world’s biggest independent oil trader, expects its volumes of Russian oil to “diminish significantly” in the second quarter while rival Trafigura has said it will stop all purchases of crude oil from Rosneft by May 15 and “substantially reduce” the volume of refined products it buys.

“The bulk of the fall in Russian supply had already happened and been priced in,” said Paul Horsnell, head of commodities research at Standard Chartered. “Today’s announcement provides market clarity that the price isn’t coming back any time soon.”

The proposed sanctions are also phased. Crude imports are to cease within six months and refined products — like diesel — by the end of the year.

“The whole purpose of the unwinding of Russian oil is to try to avoid blowing up the oil price,” said SEB’s Schieldrop. “They have constructed it with that purpose.”

The measures also must win the backing of all 27 EU member states. According to the draft proposal, Hungary and Slovakia, which are particularly reliant on Russian oil, would have until the end of 2023 to comply with the ban. But there were already signs of discord. On Wednesday, Hungary’s government spokesman warned that Budapest had seen “no plan nor guarantees” on ways to manage the transition away from Russian oil.

Uncertainty over how much Russian oil might ultimately be exempt was also preventing a further price rally, traders said. Hungary and Slovakia are expected to eventually comply once a timeline and alternative sources of supply are agreed.

“They must be extremely worried about ending up on the wrong side of the new iron curtain,” said Schieldrop. “This is an extremely strong, specific decision by the EU that they are moving away from Russian fossil fuels and it is of course catastrophic for Russia in the medium term.”