Chart Of The Day: After Pfizer’s Paxlovid Fails Trial, Where Next For The Stock?


Shares of Pfizer (NYSE:) headed lower on Monday, after the pharmaceuticals giant announced on Friday that its coronavirus drug, Paxlovid, failed a late-stage trial when it didn’t “meet its primary goal of significantly reducing the risk of COVID-19 infection in adults exposed to the virus.”

Investors sold off Pfizer stock on Friday in after hours trading. Shares fell as much as 3.9% before the weekend. And though PFE stock gapped lower by 3% at the open on Monday, the stock found support during the day which cut the falling gap by 1.5% at the close.

So, with the viral outbreak slowing in many countries and its newest anti-viral treatment stalled, is it inevitable that Pfizer shares are heading lower? Not necessarily.

Some researchers are for Paxlovid as a treatment for long COVID which is estimated to affect about 30% of those who were infected with the virus. As well, health analytics firm Airfinity forecasts that Paxlovid could be one of the fastest selling treatments for COVID. Airfinity analysts expect revenues of nearly $24 billion from the treatment in 2022.

With seemingly conflicting fundamentals, is PFE a buying opportunity, or a stock headed for a crash? The balance of supply and demand is telling a mixed story. 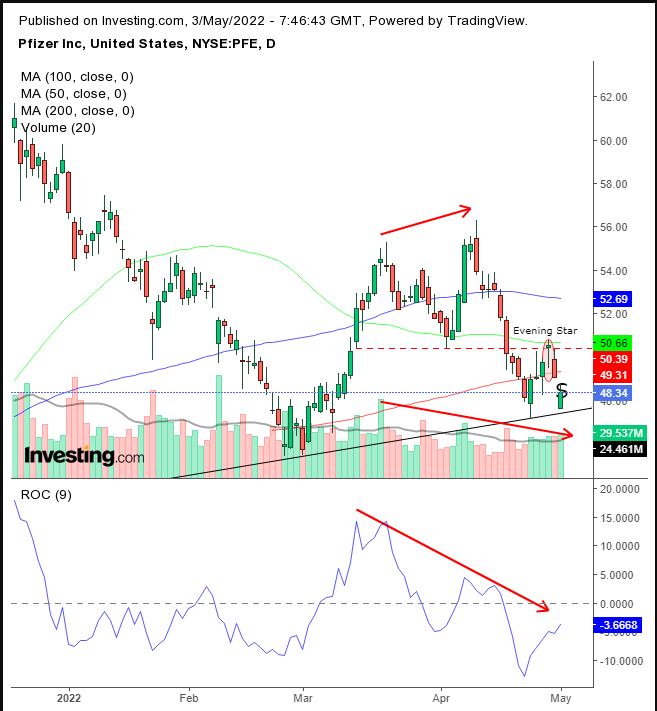 Even before the company’s announcement on Friday about the failed Paxlovid trial, the stock had already completed an Evening Star. The pattern consists of three candles demonstrating a reversal after a bullish push in the form of a long green candle. A follow-up rising gap was pushed back by bears via a falling gap, followed by a long red candle. This pattern’s bearish sentiment was reinforced by a second gap.

The Evening Star confirmed the resistance of a double-top, whose neckline is reinforced by the 50 DMA, foretold by diminishing volume, providing a negative correlation between falling momentum as measured by the Rate of Change to the rising price between the Mar. 21 and Apr. 11 peaks.

Still, the price found support when it bounced off a rising trendline. The longer view provides some context for this trendline. 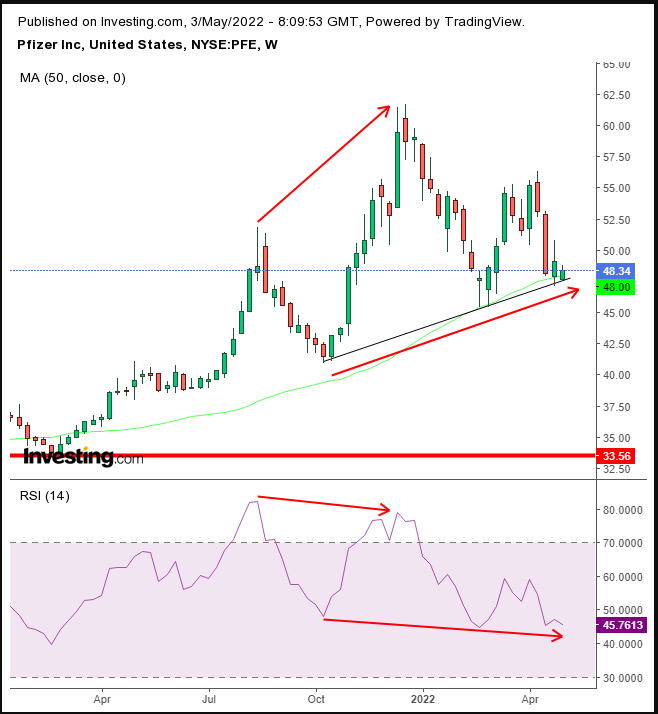 Via the bigger picture, the rising trendline may be a honeytrap in the form of an upward sloping H&S top, again reinforced by the 50 WMA.

The weakening momentum, represented by the Relative Strength Index, did not support the rising price between the August and December peaks, triggering a Negative Divergence. Similarly, the RSI diverged from the increasing price troughs from October 2021 to February 2022.

So, based on all the evidence, the double-top on the daily chart, confirmed by the Evening Star’s implied target, would complete the weekly H&S top by crossing below its neckline.

However, beware of whipsaws. Note that the weekly RSI may find support by its recent lows and rise again, even if the price ultimately heads lower. Therefore, a trading strategy coupled with money management tailored to individual needs is essential for success.

Conservative traders should wait for the weekly H&S to complete with a downside breakout below the February lows, followed by a return move that demonstrates distribution.

Moderate traders would wait for the price to slip to $46, then remain below the neckline for two sessions. They might then wait for a corrective rally for a better entry.

Aggressive traders could enter a long contrarian position now, hoping for a rebound off the rising trend line and taking advantage of its proximity, before returning for short amid a return move to retest the Evening Star.

Inclusive fintech is hard to do right, so Line has a different direction – TechCrunch