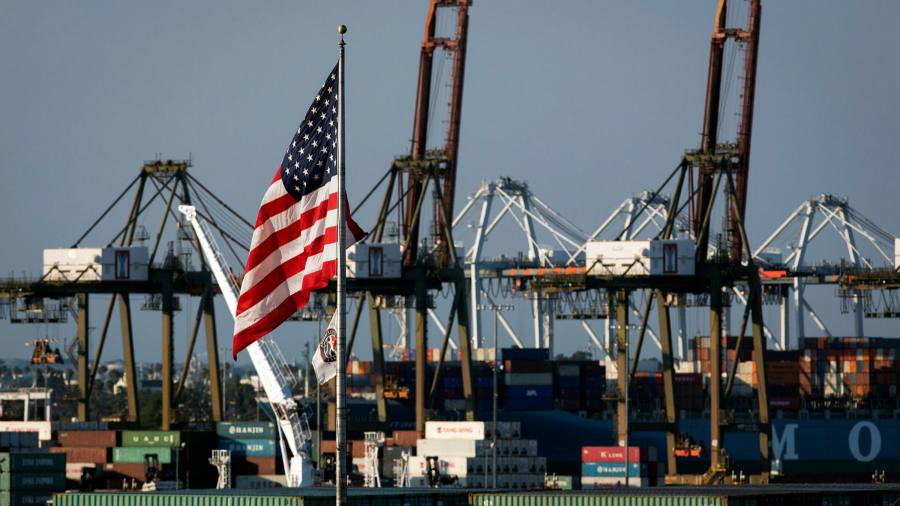 US economy contracts for first time since mid-2020


The US economy contracted unexpectedly in the first quarter, reflecting growing trade imbalances and weaker inventory growth, but underlying strength in American consumer and business spending makes it unlikely the Federal Reserve will alter its course.

Gross domestic product dropped 1.4 per cent on an annualised basis in the first three months of 2022, the US commerce department reported on Thursday, down significantly from the 6.9 per cent rise recorded in the fourth quarter of 2021.

That marks the first contraction of the economy since mid-2020, when Covid-19 lockdowns had curtailed activity. The data translate to a 0.4 per cent fall compared with the previous quarter, based on a measure used by other major economies.

“The headline number looks a bit troubling and it came in weaker than expected. But when you dig beneath the surface, it largely painted a picture of resilient domestic demand in the first quarter,” said Kathy Bostjancic, chief US economist at Oxford Economics.

GDP was pulled lower by a growing trade deficit, which hit a record high in March as import volumes and prices surged. Exports fell 5.9 per cent and imports rose 17.7 per cent, leading net exports to generate a drag of 3.2 percentage points on headline GDP, said Aneta Markowska at Jefferies. An 0.8 per cent annualised drop in business inventories also detracted from GDP.

However, the weak headline figure belied strength in American household incomes. Personal consumption grew 2.7 per cent in the first quarter, up from 2.5 per cent at the end of last year, but shy of economists’ estimates. Business investment rose 9.2 per cent from 2.9 per cent the prior quarter.

The surprise contraction and surging inflation present a challenge for US president Joe Biden and Democrats headed into the November midterm elections. Biden on Thursday blamed “technical factors” for the ugly report and touted strong consumer spending, business investment, and residential investment.

“The American economy — powered by working families — continues to be resilient in the face of historic challenges,” he said, adding: “The US confronts the challenges of Covid-19 around the world, Putin’s unprovoked invasion of Ukraine, and global inflation from a position of strength.”

The data come as fears mount that inflation and aggressive tightening by the Federal Reserve will trigger an economic recession. A widely used indicator of recession — the inversion of the yield curve — briefly flashed red earlier this month.

US growth is being threatened by the highest inflation in 40 years as the Russian invasion of Ukraine has driven up commodity prices and Covid lockdowns in China herald further issues with supply chains. There was further evidence of price pressures in the report: the so-called core personal consumption expenditures price index, which strips out volatile components like food and energy, rose 5.2 per cent, compared with 5 per cent last quarter.

The Fed has previously indicated that it will respond to inflation forcefully, with markets pricing in a half percentage point rate rise at its next meeting in May. Investors in the futures market now expect the central bank to raise its key interest rate to 2.7 per cent by the end of the year, up from between 0.25 and 0.5 per cent.

“We still think the Fed will hike 50 basis points in May. This is not going to stop them from doing that,” said Stan Shipley an economist at Evercore.

After some choppy trading immediately following the report, Treasury yields were modestly higher, with the biggest gains in the policy-sensitive two-year yield. That flattened the yield curve, though it remained within recent trading ranges. US stocks advanced, with the S&P 500 up 0.9 per cent.

Netflix Stock Is Tough To Value — And To Recommend