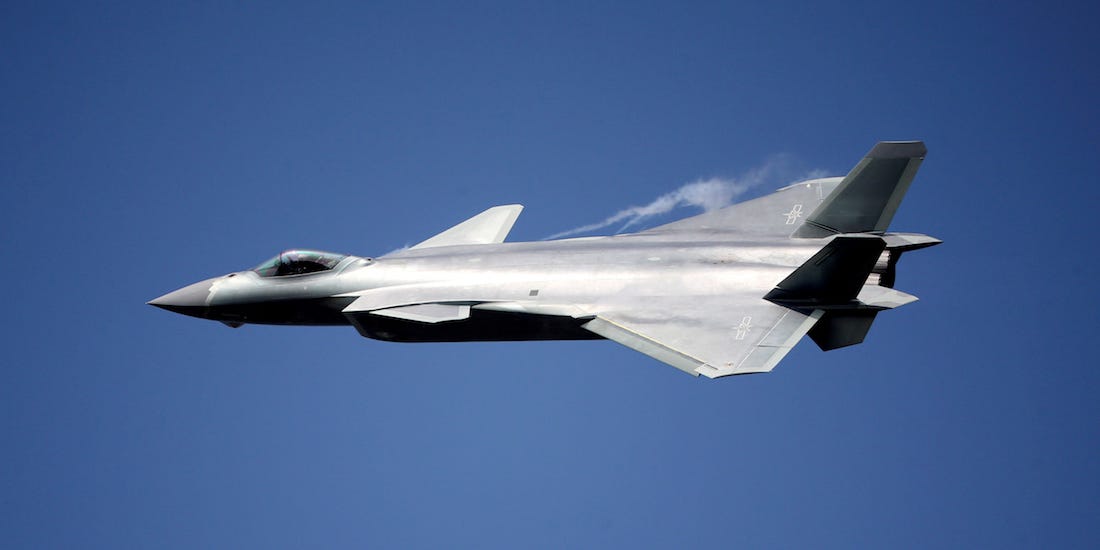 
China’s military has rapidly built one of the world’s largest aviation forces, developing increasingly capable aircraft that the US Defense Department has warned are “gradually eroding” the US military’s advantage in the air.

In early April, six Y-20 cargo planes arrived in Belgrade to deliver what were believed to be Chinese-made HQ-22 surface-to-air missiles to Serbia’s military. The roughly 5,000-mile flight by what Chinese state media called “a record-breaking number” of Y-20s was seen as a demonstration of Beijing’s ambitions for global power projection.

Days later, a top official with the Aviation Industry Corporation of China, the state-owned firm developing the J-20 fighter jet, said that J-20s are now conducting regular patrols over the East and South China seas, a sign of the advanced jet’s increasing reliability.

The developments are indications that China’s air force “is growing more confident in its ability to operate farther and farther from Chinese shores with newer and newer aircraft,” Timothy Heath, a senior international defense researcher at the RAND Corporation think tank, told Insider.

The J-20 was originally fitted with less powerful Russian-made engines. Some of the several dozen J-20s in service are now fitted with WS-10C engines, an upgraded version of an older Chinese-made engine, but China has struggled to develop the WS-15 engine specifically designed for fifth-generation aircraft like the J-20. The lack of engine power is expected to prevent the J-20 from adopting advanced weaponry and high-end operations.

Chinese military officials have said the WS-15 would be finished by 2023 and would put the jet on par with the US’s F-22, but Heath said the upgrade shouldn’t be overstated, calling the WS-15 “at least a generation behind” the F-22’s engine.

The WS-15 “has the usual Chinese problems of short maintenance schedules, or just a short lifespan due to maintenance issues, and quality-control issues and general underperformance,” Heath told Insider.

Despite its shortcomings, the J-20 has left an impression on US commanders, who have noted that Chinese pilots are flying the J-20 “pretty well,” Gen. Kenneth Wilsbach, the head of US Pacific Air Forces, said in March.

It is “still too early” to tell whether the J-20 will be used as a multi-role fighter like the F-35 or be focused on air-superiority like the F-22, but China is showing it can employ the jet effectively, Wilsbach said, referring to a recent encounter in which “we got relatively close to the J-20s with our F-35s in the East China Sea and were relatively impressed with command-and-control that was associated with the J-20s.”

Like the J-20, the Y-20 has been operational for about a decade, and China has focused on developing the Y-20 fleet to support longer-range military operations.

Prior to the flight to Serbia, two Y-20s delivered more than 30 tons of supplies to Tonga after that country was devastated by a volcanic eruption and tsunami. The 6,000-mile flight was the longest known overseas mission for the Y-20, a former Chinese military instructor told the South China Morning Post.

In November, an aerial-refueling variant of the Y-20 took part in a military flight near Taiwan for the first time, demonstrating a capability considered essential to support longer-range and longer-duration flights by China’s fighters and bombers.

The expanding reach of Chinese military aircraft has been noticed across the Pacific, including in Australia, which US and Australian officials say faces a renewed threat of attack from Beijing.

“If you look at those distances and how that’s been transported, it’s really captured the attention of folks in Canberra,” Patrick Cronin, Asia-Pacific Security chair at Hudson Institute think tank, said of the flight to Serbia.

“This is exactly the kind of logistics and heavy lift that China’s building [and] that could use some of these facilities and access points that they’re putting money into,” Cronin said on a recent podcast, pointing a security deal recently signed by China and the Solomon Islands.

Long-distant flights to unfamiliar areas have training value but Chinese pilots already have experience conducting such operations in the older Russian-made Il-76 and Il-78 cargo planes that China’s military, the People’s Liberation Army, has used for decades, Heath said.

“The difference is they’re using the Y-20 more than the Il-76s and 78s, but it’s not a dramatic change,” Heath told Insider, adding that those missions “are really not designed to replicate” combat, with which most of China’s military does not have experience.

“I’m still not sure that the Chinese themselves know if they can deploy combat forces into a hostile country that is armed with the latest equipment, like surface-to-air missiles,” Heath said. “That’s a type of situation I just don’t see the PLA being well prepared to carry out at this point.”