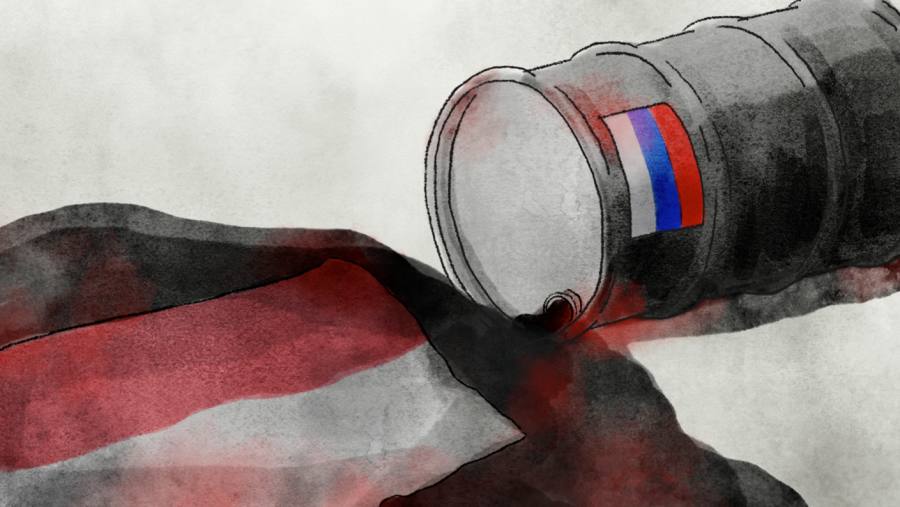 Indonesia under pressure as it weighs buying Russia’s ‘blood oil’


Indonesia’s plan to buy oil from Russia amid the war in Ukraine has ignited an argument over where the country should come down on global issues.

The south-east Asian nation, which desperately needs cheap oil to tame inflation, regardless of where it comes from, has attracted strong criticism and accusations that buying from Russia will only fill President Vladimir Putin’s war chest.

Under President Joko “Jokowi” Widodo, Indonesia has long prioritised domestic concerns over global ones, placing a heavy focus on developing its infrastructure and minerals processing industry. But as this year’s G20 chair and an emerging economy leader, Widodo might now feel added pressure over his government’s inward-looking policies.

Even Greenpeace seems to be pointing a finger at Widodo. Activists from the environmentalist group in late March used kayaks and inflatable boats to manoeuvre between two oil tankers, including the Indonesia-owned Pertamina Prime. Greenpeace said it was stopping the transshipment of Russian oil to the Pertamina Prime. Its kayaking activists were even able to paint the words “OIL FUELS WAR” on the tanker’s hull.

Although the tanker is owned by Pertamina International Shipping, a subsidiary of the state-owned oil and gas company, it is not clear whether it was attempting to deliver Russian crude to Indonesia. According to data from vessel tracking site marinetraffic.com, the tanker is currently off the coast of West Africa and bound for China.

Indonesia’s energy ministry said the country has not imported oil from Russia in recent years. But moves are afoot to do just that. Pertamina chief Nicke Widyawati on March 28 sought lawmakers’ permission to buy Russian oil at a “good price” during a parliamentary session.

“Politically, there’s no problem as long as the company we are dealing with was not sanctioned,” she said. “We have also discussed the payment arrangement, which may go through India.”

Yuddy Chrisnandi, a former Indonesian ambassador to Ukraine, told local media that purchasing Russian oil would mean “the country is helping indirectly to buy bullets, bombs — all materials and war machines — to continue to invade”.

While Indonesian experts voice concern about buying oil from Russia, public opinion is rather supportive of the idea, at least on social media. A YouTube video about Pertamina’s plan has received mostly supportive comments. “This is a brilliant idea,” one user wrote. “[It is] very advantageous economically, and politically we’re showing our sovereignty.”

“Cool! Indonesia must be brave. Don’t be controlled by the West despite criticism. Buying Russian oil is for the sake of Indonesian people,” wrote another.

The company told Nikkei “the plan to purchase crude oil from Russia is still in the internal planning stage at Pertamina”. The comment appears to hint at objections and disagreements within the government.

Separately, Pertamina has since 2016 been working on a $13bn joint refinery project in East Java Province with Russian energy company Rosneft. A Pertamina executive recently said that land acquisition and clearing as well as front-end engineering design work are ongoing despite financial and trade sanctions against Russia imposed by global powers.

“The hope is, of course, that the situation [surrounding Russia] will become conducive again,” Kadek Ambara Jaya, president and director of the Pertamina-Rosneft joint venture, told Nikkei last month. “The need for the refinery in Tuban is urgent because it’s not only for Pertamina but it is in the national interest to be free from dependence on oil product imports.”

If an agreement made back when Indonesia and Russia began working on the refinery were still to stand, Indonesia would rely on Russia for almost a fifth of its crude oil imports.

Aware of the possible repercussions, Indonesian leaders have long felt the need to tame inflation. They remember 1998, when during the Asian currency crisis then President Suharto decided to raise fuel prices. The painful increases led to anti-government protests across the nation, with the unrest eventually bringing down Suharto after more than 30 years of dictatorship.

No wonder, then, that Widodo’s government had previously insisted on keeping energy prices low despite what is expected to be a significantly swollen budget for energy subsidies this year. But now the surge in oil prices, brought on by Russia’s invasion of Ukraine, has forced south-east Asia’s largest economy to pass on some of the higher costs to drivers and other energy users. The move is expected to drive up Indonesia’s inflation rate, which reached a two-year high of 2.64 per cent in March.

Thousands of university students this month joined rallies in the capital Jakarta and other major cities, protesting fuel and other price increases. Widodo had earlier rebuked some cabinet ministers for failing to clearly explain to the public the reason for the price rises.

If the high oil prices persist, they could cut a full percentage point off of the Indonesia’s growth rate and those of other large developing economies that import a lot of oil, wrote Indermit Gill, World Bank vice-president for equitable growth, finance and institutions, in a blog post in March.

“Before the war broke out,” he noted, “China and Indonesia [were expected to grow] by 5 per cent, so a slowdown of 1 percentage point of growth means that growth will be cut by between a fifth and a half.”

The situation reflects how high oil prices can impact the economy and politics of a net oil importer that prides itself on its independent and active foreign policy.

Indonesia will this year host G20 ministers and leaders, a rare opportunity for it to be recognised as a fast-growing emerging economy and the world’s third-largest democracy. When Widodo assumed presidency of the bloc last year from Italian prime minister Mario Draghi, he vowed to bridge the gap between developing and developed nations as chair, especially in regard to Covid-19 vaccine availability, the energy transition and the economic recovery from the pandemic.

Yet the escalating Ukraine war has darkened Indonesia’s rare opportunity, and Widodo might be lucky to be able to stand up and be recognised as a referee as the world’s major powers lob threats at one another.

The G20’s first ministerial meeting since Russia invaded Ukraine was held on April 20. As Anton Siluanov, Russia’s finance minister, rose to speak, finance ministers and central bank governors from the US, EU, UK and Canada got up and walked out. But several members of the group, including China, are aligning themselves with Moscow.

In an interview with Nikkei in March, Widodo was reluctant to take up the issue of Russia’s participation, saying only that the G20 was the “premier [gathering for] economic co-operation” and not a political venue. His government might not feel obliged to follow Western-led sanctions against Russia but is under growing pressure, given its G20 role, to be more assertive in relation to Russia.

Although Widodo has said he wants his country to be considered “a leader of emerging economies”, his policy is gradually turning inward again. With presidential campaigning due to get under way next year, Widodo’s administration is placing more weight on social stability. Keeping consumer prices stable will be key.

Some analysts sympathise with Indonesia.

The plan to buy cheap oil from Russia is “an opportunist decision”, said Bhima Yudhistira, an economist at the Jakarta-based think-tank Center of Economic and Law Studies. “Indonesia [should] take advantage of its free and active politics. Indonesia really needs cheaper oil, especially if oil prices continue to rise above $100 per barrel . . . The government needs cheap oil to contain domestic fuel prices so that inflation does not rise too high.”

Yuri Sato, emeritus research fellow at the Institute of Developing Economies at the Japan External Trade Organization, agrees. She noted that Indonesia depended on fossil fuels and is a net importer of crude oil, saying it “has a strong desire to curb the rise in domestic fuel prices as much as possible” and that Pertamina’s call to import Russian oil is a “manifestation of Indonesia’s pragmatism”.

“Indonesia,” added Sato, “consistently maintains a neutral position based on international law without taking the sides of any major powers. [Furthermore], it takes the position that it is free to co-operate economically with any country.”

Indonesia is not the only Asian country that wants to maintain at least part of its energy relationship with Russia. Japan’s trade minister Koichi Hagiuda this month said the country would prioritise energy security and would not withdraw from the Sakhalin-1, Sakhalin-2 and Arctic LNG 2 (ARC 2) gas projects in Russia.

Sri Lanka, meanwhile, has bought discounted coal from the Singapore unit of Russian coal trader SUEK AG, according to a Reuters report in late March. In India, local media reports suggest Moscow has offered discounted crude oil to New Delhi and that Prime Minister Narendra Modi’s government is looking into the deal.

Even Western countries are reckoning with Russian oil. The US and UK have already decided to phase out Russian oil imports, but Germany and Italy face a tougher decision as they are much more dependent on Russia to meet their energy needs. The EU in 2019 imported 40 per cent of its natural gas and more than 20 per cent of its crude oil from Russia.

While Pertamina is still looking at that “good price” Russia is offering, the international pressure to isolate the Kremlin grows. Investors and consumers are also increasingly interested in where governments and conglomerates come down on human rights.

This article is from Nikkei Asia, a global publication with a uniquely Asian perspective on politics, the economy, business and international affairs. Our own correspondents and outside commentators from around the world share their views on Asia, while our Asia300 section provides in-depth coverage of 300 of the biggest and fastest-growing listed companies from 11 economies outside Japan.

Yudhistira, the economist, noted that Indonesia needed to be careful purchasing Russian oil, or “bloody oil” as it was labelled by Oleg Ustenko, an adviser to Ukraine’s president Volodymyr Zelensky. He added that Indonesia could be considered pro-Russian or that it would simply be keen to exploit the situation by buying oil at a cut-rate price. If it went ahead with a purchase, he said, “Indonesia could be shunned by partners from other countries.”

Additional reporting by Bobby Nugroho and Ismi Damayanti in Jakarta.

A version of this article was first published by Nikkei Asia on April 19. ©2022 Nikkei Inc. All rights reserved.