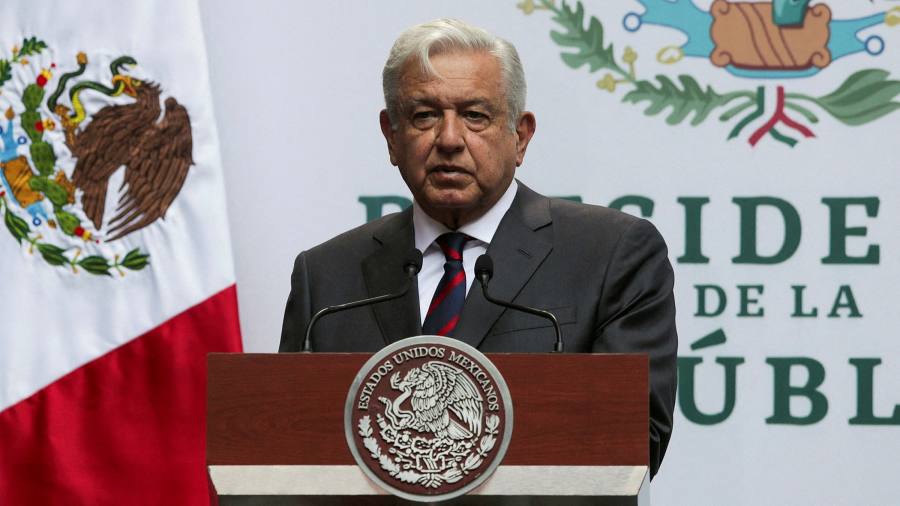 
Andrés Manuel López Obrador has moved swiftly to nationalise Mexico’s lithium reserves in a signal that the president intends to continue his leftwing populist agenda despite a failure to extend the state’s reach over the electricity sector.

The new law reflects the Mexican leader’s determination to reassert state control over natural resources but analysts say it will make it harder for the country to benefit from its lithium reserves as demand for the metal soars.

López Obrador had convened congress for a highly unusual Easter Sunday vote on his controversial electricity bill, which the US had criticised for jeopardising billions of dollars of renewable investment and potentially contravening the US-Mexico-Canada free trade agreement.

Opposition lawmakers denied him the two-thirds majority needed for constitutional changes but the president responded immediately by rushing lithium nationalisation, which needed only a simple majority, through both houses of congress over the following two days.

“The lithium is ours,” López Obrador crowed at his news conference on Tuesday, recalling “the oil is ours” refrain from the country’s 1938 expropriation of the oil industry from foreign companies. That act is still seen as a landmark expression of sovereignty by Mexican nationalists.

“It was a very good decision yesterday. Let’s see if it acts as a scolding to those who didn’t finish the job,” he added, referencing opposition lawmakers who “thought by blocking the constitutional reform that it was resolved — no, no, no”.

Since taking power in 2018, López Obrador has fought to reverse resource reforms under previous governments which opened up the oil and electricity sectors to private investment. He has pushed a model of development that gives primacy to resource exploitation by state-controlled companies.

The lithium nationalisation rallied the president’s base, with his supporters launching a campaign of naming and shaming lawmakers who opposed it as “traitors”. López Obrador also took a swipe at foreign investors who, he claimed, “had their eyes on an asset of the nation”.

The Latin American region has the world’s biggest lithium reserves and soaring demand for the silver-white metal, which is needed for rechargeable batteries in electric vehicles, has ignited hopes of a mining bonanza.

It has also encouraged leftwing politicians across the region to launch a fresh wave of resource nationalism: Bolivia has made lithium a state monopoly and Chile is planning to set up a state-owned lithium company.

Analysts in Mexico expressed bewilderment with the president’s high hopes for lithium, describing his hasty nationalisation as more about saving face after the failed energy reform than promoting prosperity.

“The lithium initiative is a response to the fact that the electricity reform was not approved. It could be seen as a political gesture to say they didn’t lose,” said Gabriela Siller, head of financial and economic research at Banco Base.

The new law will establish a “decentralised” agency for the development of lithium. It also states: “The exploration, exploitation and use of lithium is declared to be of public utility, for which no concessions, licences, contracts, permits, allocations or authorisations will be granted.”

Mexico’s lithium potential remains a matter of debate. Lithium production is complex and costly because the metal is highly reactive. It is extracted from brine or from rocks, depending on the region.

The Mexican Association of Mining Engineers, Metallurgists and Geologists said in a statement that “clays containing lithium have been located” in the country. “To the best of our knowledge, no country has produced and commercialised lithium from clays,” it added.

British miner Bacanora Lithium had been developing Mexico’s lone significant lithium project in the northern state of Sonora with Chinese partner Ganfeng International Trading. Ganfeng now controls the project, where operations were projected to start in 2024, according to Bacanora.

Bacanora referred questions to Ganfeng, which did not immediately respond to requests for comment.

When asked about the private lithium investment on Tuesday, López Obrador responded: “These contracts have to be reviewed.”

Mining experts expressed scepticism over the government’s move into a capital-intensive sector such as lithium, noting Mexico’s failure to establish a successful state-run uranium company in the 1980s.

“When it comes to lithium chemicals, the process from identifying a deposit to bringing that deposit into commercial production is lengthy, expensive and not straightforward,” said Emily Hersh, chief executive of Nevada-based Luna Lithium and a specialist on mining in Latin America.

“The government is nationalising an industry that is not generating cash flow in any way and the first project in this industry is still many years out from producing anything of tangible economic value,” she added. “It’s a low economic loss, but a high political gain.”