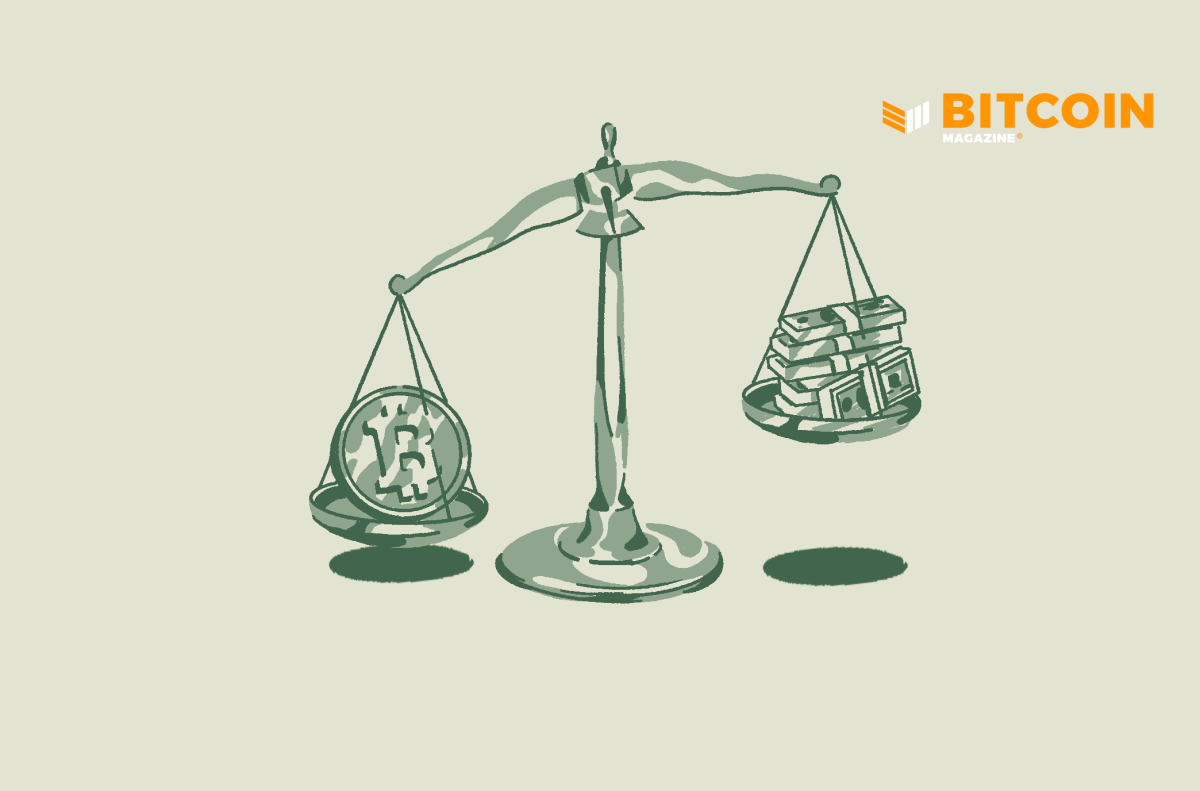 
The following article is an opinion piece and is not intended to be financial advice.

“Ask yourself: Is bitcoin going up more than 3% every year? Then it is a mistake not to maximize your exposure at the current rate of inflation. Any loan you can roll forward for a reasonable amount of time is good. A loan with a 10- to 15-year mortgage against your property is a no-brainer.” — Michael Saylor

Bitcoin is the best insurance against inflation. The continuous issuance of money by central banks has debased fiat currencies, destroying their purchasing power. More than one in five dollars was created in 2020 and 2021.

Data from the Federal Reserve shows that a broad measure of the stock of dollars, known as M2, rose from $15.4 trillion at the start of 2020 to $21.18 trillion in December 2021. M2 is a measure of the money supply that includes cash, checking and saving deposits and easily convertible near money like treasury bills and money market funds. The increase of $5.78 trillion equates to 37.53% of the total supply of dollars.

Bitcoin, which is limited in supply, increases in price as market participants are looking for a good store of value to protect their money against inflation and government confiscation. This was illustrated by the recent spike in the ruble/bitcoin trading pair with volume increasing as Russians looked to circumvent sanctions imposed by the international community because of the Russian invasion of Ukraine on Thursday, February 24, 2022.

Bitcoin has outperformed most assets in the legacy system over the past decade and will most likely continue to do so. Bitcoin exhibits the qualities of sound money — scarcity, durability, divisibility, portability and fungibility — like no other monetary asset in history. The supreme characteristics of bitcoin constantly increase the likelihood that it will continue to outcompete gold and fiat currencies via the Lindy effect, a theory that the longer some nonperishable thing survives, the more likely it is to survive in the future. We may assume that bitcoin’s price increases 60% to 70% per year going forward for the medium term.

Every minute, hour, day and year that bitcoin survives increases its chances of continuing into the future as it garners more trust and survives more shocks. It is also worth noting this goes hand-in-hand with the property of antifragility, where something becomes more robust or stronger with each attack or time the system is under some form of stress. Due to the inherent properties of bitcoin, any sensible market participant will (and should) maximize their exposure to bitcoin over time.

The most obvious thing to do is to buy bitcoin. However, this strategy is limited to the available liquidity. In addition, the existing liquidity can be tied up in responsibilities. For example, a real estate investor needs to be liquid in fiat to have enough cash on hand to meet financial obligations, such as property maintenance or bank liabilities. Consequently, the task is to increase the capital available to buy bitcoin without putting yourself in a vulnerable position. If you have accumulated wealth in the existing legacy system, you can use your assets as collateral to incur fiat-denominated debt. Buy bitcoin and pay off the debt with cash flow from your assets or bitcoin’s price appreciation.

For some, most likely many, it seems risky to take on debt to buy bitcoin when the opposite is true. Borrowing fiat-denominated debt to buy bitcoin is one of the greatest business opportunities of our lives. Debt denominated in fiat that you take on today will lose value in the future while the price of bitcoin rises. In addition, interest rates are currently low.

Bitcoin’s appeal comes from the fact that its monetary policy is incorruptible and unalterable. There will never be more than 21,000,000 bitcoin. This means that those people that voluntarily choose to take on debt in an inflating currency in favor of a disinflationary and sound currency will be able to accumulate long-term oriented capital at a disproportionate rate to those who do not.

Michael Saylor, CEO of software intelligence firm MicroStrategy, has brilliantly laid out a blueprint of techniques for using fiat debt to buy bitcoin.

In August 2020, Saylor famously announced MicroStrategy’s first bitcoin purchase, stating that the company had converted $250 million from its cash holdings to more than 21,000 bitcoin. By late September the same year, Saylor converted an additional $175 million dollars into bitcoin, effectively converting 100% of MicroStrategy’s cash position into bitcoin.

MicroStrategy announced the closing of its “bond offering” of senior secured notes due 2028 with the intention of using the proceeds to buy bitcoin on June 14, 2021. The aggregate principal amount of the notes sold in the offering was $500 million and the notes bear interest at an annual rate of 6.125%. The notes were sold in a private offering to qualified institutional buyers.

The notes are fully and unconditionally guaranteed on a senior secured basis, jointly and severally, by MicroStrategy Services Corporation. The notes and the related guarantees are secured, on a senior secured basis with MicroStrategy’s existing and future senior indebtedness, by security interests on substantially all of MicroStrategy’s and the guarantors’ assets. This includes any bitcoin or other digital assets acquired on or after the closing of the offering, but excluding MicroStrategy’s existing bitcoin as well as bitcoin and digital assets acquired with the proceeds from existing bitcoin.

In parallel, MicroStrategy announced a $1 billion stock offering. The company used the proceeds from the sale of its Class A common stock to acquire even more bitcoin. In total, MicroStrategy completed 17 bitcoin purchases. At the time of writing, the company holds 125,051 bitcoin for which it has paid a total of $3.78 billion, with an average purchase price per bitcoin of approximately $30,200. MicroStrategy’s existing bitcoin is being held by a newly formed subsidiary, MacroStrategy LLC.

Although Michael Saylor bought bitcoin late, he understands the value of bitcoin very well. It is digital gold for the digital age. It is a purpose built money for the digital age — permissionless, open-source, sound and global. Bitcoin is easy to buy, store and sell. High in liquidity and tradable 24/7.

Bitcoin has a unique value proposition. Bitcoin as a protocol for exchanging value allows you to directly own part of it. The Bitcoin network is a transaction processing system. From transaction processing comes the ability to exchange money, which is bitcoin the asset, the currency that represents the value of the underlying system. It is both a payment network and an asset, backed by the most resilient computer network in the world. If you could own part of the internet, would you say no?

The volatility in bitcoin is natural to commodities. We observe similar price patterns in gold and oil. Bitcoin’s volatility is more extreme as it is the first globally traded asset, but as its market cap increases, its volatility decreases.

The volatility is strong day-to-day, but over five years, no one who has held for the entire period has ever lost money, even the people that bought at market tops. Anyway, the volatility allows for great entry points. More important is the liquidity and accessibility of bitcoin. Saylor has said, “Try to sell $100 million worth of gold on a Saturday on your iPhone … I bet that won’t work.”

If you understand the value proposition of bitcoin, you could do what Saylor did. Look at your assets in the legacy system and leverage the long-term value of those assets into bitcoin. Do you own a business? You can borrow money with the company and pay the interest with earnings from the company. Do you own real estate? Use the real estate as collateral to borrow money and pay back the loan with the rental income. It’s best to speak directly to a Bitcoin-friendly bank because you don’t have to explain bitcoin’s value proposition. However, a bank does not necessarily want to know the purpose of a loan if the collateral that secures it has a good cash flow, for example, a property with good rental income. I still think it’s important to be transparent when the bank asks for it. This should be assessed on a case-by-case basis.

Since bitcoin is very volatile, you must be careful. Price declines of 40–60% occur regularly in bitcoin. Don’t make yourself vulnerable to price fluctuations. You must deal with volatility, so keep the loan-to-value (LTV) low. I suggest a loan-to-value ratio of 10–25%. In addition, a loan should only be taken out if bitcoin experiences a significant drop in price, as the risk of a further drop in bitcoin’s price is significantly reduced. A loan should have a minimum term of at least five years, ideally 10 or 15 as bitcoin bear markets can historically last up to three years. This strategy applies to both individuals and companies.

I will show how effective this strategy is using the example of a property owned by a medium-sized real estate development company:

Company A builds and owns a 68-unit apartment building. The property brings in annual rental income of $750,000. A bank will generally value the property based on 20 times the annual rental income multiplier, i.e., $15,000,000. Typically, the construction of such a property was financed by a bank. Company A could apply for an additional $2,000,000 loan with a 10-year term and 5% interest, i.e., $100,000, with the property as collateral from the bank that financed the construction of the property. The loan would correspond to around 13.3% of the collateral.

Company A will use the rental income from the property to service the annual interest charge.

This leaves more than enough rental income to service existing obligations, including the interest charge on the initial construction loan and the provision for any costs that may arise, without creating unnecessary additional risks.

Assuming that bitcoin grows at a 60% annual rate-of-return, after 10 years, the bitcoin acquired with the loan will have the following value:

However, this would mean that the value of bitcoin, currently about $42,000, will rise to over $2,600,000 in 10 years. For me as a Bitcoiner, this price is likely, especially considering that roughly 10 years ago, the closing price for bitcoin on December 31, 2012, was $13.45. But I don’t think bitcoin will develop as quickly because it’s simply a matter of bigger sums now to see such growth, that would require a number of nation-states to adopt bitcoin as a reserve currency, which will most likely take more time to play out.

We should, therefore, cap the bitcoin price at $1,000,000 by 2030. These assumptions are based on a bitcoin price prediction by ARK Invest.

No one can predict the future, but we can safely assume that the adoption of bitcoin has reached the point of no return. This has been confirmed by the acceptance of bitcoin as legal tender in El Salvador and its inclusion on a number of balance sheets by Nasdaq-listed companies such as Tesla and MicroStrategy.

We can, therefore, conclude that Company A, with a low loan-to-value of around 13.3% and an interest burden that does not involve unnecessary risk, can make an above-average investment by taking on the fiat-denominated debt and buying bitcoin.

In a future article, I will show how Company A can make use of the bitcoin they hold as a result of acquiring the bitcoin as illustrated above.

This is a guest post by Leon A. Wankum. Opinions expressed are entirely their own and do not necessarily reflect those of BTC Inc. or Bitcoin Magazine.

El Salvador To Buy One Bitcoin Every Day – Bitcoin Magazine