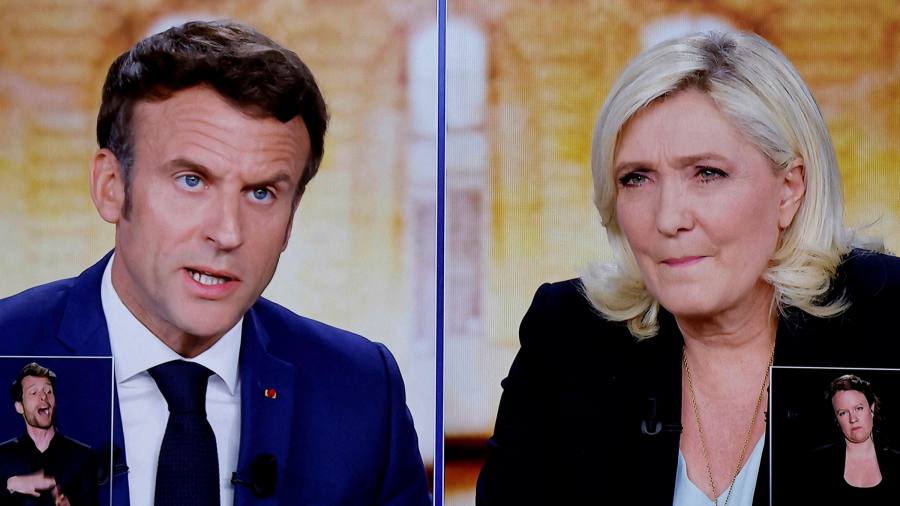 Emmanuel Macron, France’s president, has accused his far-right rival Marine Le Pen of being beholden to Vladimir Putin and of risking civil war with her plans to curb Islamism.

But in a combative television debate four days before the final vote of the presidential election, Macron was unable to land the same kind of killer blows that sealed Le Pen’s defeat in 2017.

Le Pen, who has her best chance to date of becoming France’s first woman president and its first far-right head of state since the second world war, outlined her plans to drastically reduce “massive, anarchic” immigration, reform the EU and impose law and order.

She also accused the liberal Macron of having a “very bad economic record” and “an even worse social record” as president.

Thanks for reading FirstFT Europe/Africa. Here’s the rest of today’s news — Gary

The latest from the war in Ukraine

1. Boris Johnson vows to lead Tories into next election The UK prime minister urged people to focus on “things that matter”, as he prepared to table a “wrecking amendment” today that would defer a House of Commons vote on opening a formal investigation into claims that he deliberately misled parliament over the partygate scandal.

2. Bill Ackman sells entire Netflix stake at roughly $400mn loss The hedge fund billionaire has sold his stake just months after acquiring the position, capping a painful 24 hours for Netflix, which lost close to 40 per cent of its market value after it revealed a decline in subscribers.

4. UK schools warn on lack of ‘catch-up’ funding Two-thirds of British primary headteachers said a lack of “catch-up” funding has left pupils struggling to recoup lost learning from the Covid-19 pandemic as schools grapple with the cost of living crisis.

5. Musk confident Tesla can steer past supply chain issues Elon Musk said severe supply chain pressures would put a brake on the electric carmaker’s growth in the current quarter, but he was bullish for 2022 and claimed a new robotaxi would reach production in 2024.

Johnson in India The UK prime minister is expected to avoid the issue of Ukraine as he begins a two-day visit to India, and will instead focus on building bilateral trade and defence links.

Register here to attend the FT’s first Crypto and Digital Assets Summit on April 26-27. Be sure to check out the full line-up of events, including remarks from Changpeng Zhao, founder and chief executive of Binance.

Welcome to libertarian paradise The island of Sark in the English Channel is independently governed as part of the Bailiwick of Guernsey, one of Britain’s three Crown dependencies. It has no income tax, no inheritance tax, no capital gains tax, no VAT and no employment laws of any kind. But is it the Ayn Rand-style haven it’s cracked up to be?

Sunak’s fall from grace is a disaster for the Conservatives The collapse of Chancellor Rishi Sunak’s public reputation has been perfectly timed for Boris Johnson, depriving plotters of his most obvious successor. But the loss of their Plan B is a serious blow for the Tories, writes Robert Shrimsley.

Germany prepares for a Russian gas embargo Shocked by the devastation visited on Ukrainian cities by Moscow’s bombs, the EU has imposed swingeing sanctions on Russian hydrocarbons. But talk of a full-scale embargo on Russian energy is spreading panic in Germany.

Student frustration mounts over UK university disruption After two years of Covid disruption, with the decline of in-person learning and “extortionate” fees, frustrated students in Britain now face fresh strain as their lecturers vote for another round of strike action.

Thank you to readers who took yesterday’s poll — 60 per cent of respondents said they would invest their bonus money.

Inside Politics — Join us for analysis of the latest political news, plus polls and a dose of culture — by new columnist Stephen Bush. Sign up here

Working It — Discover what’s shaking up the world of work with Work & Careers editor Isabel Berwick. Sign up here

Disrupted Times — Your essential FT newsletter about the changes in business and the economy between Covid and conflict. Sign up here

Bonds Are Down 30% From All-Time Highs