Since the start of the COVID pandemic, it’s been an increasingly wild ride for chipmaker Advanced Micro Devices (NASDAQ:) along with the broader semiconductor sector.

The global health crisis kept people at home, increasing demand for electronics and the services they provide. That boosted the demand for the chips needed to run those devices. Plus, in early February 2021, the newly inaugurated Biden administration began enforcing targeted restrictions on what were deemed sensitive technology exports to China which, in turn, caused the Asian nation to stockpile its semiconductor output, which only added to the growing supply chain crunch for the technology and the products they pilot.

The situation created a severely unbalanced demand versus supply paradigm, driving AMD shares nearly 350% higher between the market’s March 2020 bottom and the December 2021 record peak. That performance was more than double the ‘s 145% surge during the same period. And that was the index that outperformed the other major US benchmarks during the period.

Indeed, the climbed “just” 114% at the same time which means Advanced Micro Devices stock’s growth was more than three times that of the broad benchmark. However, that rosy picture is rapidly shifting for AMD.

Year-to-date, the company’s shares have lost 35% even with EPS expectations increasing by 20%. That’s significantly worse than the NASDAQ 100’s concurrent 21.25% slump and the losses are closing in on nearly three times that of the S&P 500.

The negative catalyzer weighing on AMD and other growth stocks has been rapidly rising Treasury yields, pointing to higher interest rates ahead which are expected to severely impact high-multiple growth stocks. At 38 times earnings, AMD is certainly in that category.

Given its current negative momentum, even AMD’s upcoming Q1 2022 earnings report, scheduled for Tuesday, May 3, after the close, will likely not reverse the stock’s course, even if the Santa Clara, California-based company beats. EPS is forecast to come in at $0.9144 on $4.99 billion in revenue, the $0.52 EPS and $3.48 billion in revenue for the same quarter last year.

Even the current supply and demand equation isn’t helping the stock. 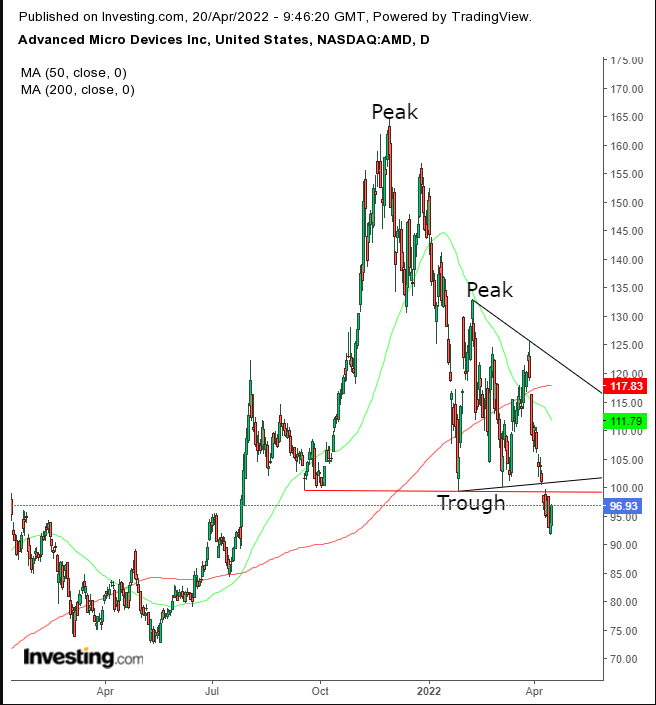 Though supporters kept buying shares at the psychological $100 level, they gave up once the price fell below it.

The pattern that emerged, a Symmetrical Triangle, had a bias to the downside, considering the underlying downtrend in which it developed. During the pattern’s development, the 50 DMA crossed below the 200 DMA, triggering a Death Cross for added bearishness.

The downside breakout cemented that perspective, and the cross below the neckline of an H&S top added to the weight of the bearish sentiment. A failed H&S top supported the pattern.

When a pattern is blown, it reverses course as traders switch positions. Even so, that reversal is expected to be temporary. The current pattern demonstrates that the top was inevitable.

Conservative traders should wait for the price to retest the resistance of the $100 level.

Moderate traders would be happy with a return to that price to reduce exposure, not necessarily to wait for trend confirmation.

Aggressive traders could short now, provided they accept the higher risk of weaker evidence as the price of the higher potential reward for beating out other traders.

Money management is crucial for trading success. Here is a generic example to showcase the essentials:

Here’s why food shortages are unlikely to occur in the U.S.