Lululemon Athletica (NASDAQ:) impressed the market when it reported fiscal Q4 earnings at the end of March. The company beat on the bottom line and raised its guidance as demand and pricing combined to boost the .

In the eyes of Bank of America (NYSE:), accelerating growth is the attractive feature while at Goldman Sachs (NYSE:) it is the pricing power they are interested in. Goldman Sachs did a screen for companies with the best margin/ability to offset inflation and Lululemon popped up in the #3 spot in the consumer discretionary sector.

As it stands now, there are 25 analysts with ratings on Lululemon that amount to a consensus weak Buy. The weak Buy rating has been over the past year even as some of the ratings lapse and new ones are initiated. The stock has picked up two analysts over the past quarter and we see that trend picking up as the year wears on. At least 9 of the analysts have come out with commentary since the earnings report was released and 8 include price target increases.

The single price target reduction is to $450 which is above the Marketbeat.com consensus of $435. The consensus price target is about 10% above the current price action and has, notably, trended lower over the past 90 and 30 days periods. The range of new price targets, those released since the Q4 report, is $390 to $507 and comes with a $447 median and $440 mean both of which are just above the consensus so we may have uncovered a turning point in sentiment.

The Institutions Are Buying Lululemon Athletica

Institutional activity has been vigorous over the past year and equals about 25% of the market cap with shares trading near $390. The balance of activity has been bullish as well with a net 2.7% of the market cap getting scooped up by sell-side investors. That brings their total holdings up to almost 82% of the company and growing although activity did slack off in Q1. Assuming institutional activity picks back up and with a bullish bias, we see no reason why LULU won’t move up to retest the all-time high near $485.

And Lululemon Athletica is not finished surprising the market. The company recently announced the expansion of its resale program after a successful two-state test last year. The program is called Like New and allows costumes to trade in “pre-loved” clothing in exchange for a gift card that can be used nationwide or online. According to reports customers are buying into the program and say most items are “good as new”. In view, the move will not only open up a secondary revenue stream but drive new sales as well as attract new customers.

Lululemon Athletica put in a bottom during Q1 that turned into a reversal that is now gaining momentum. The price action in the two weeks since the earnings report was released is incredibly bullish and suggests a continuation of the rally is at hand. Assuming the market follows through on the move, we see the stock moving up the $485 region. If not, we may see some consolidation or even a pullback in prices before it retests the high. 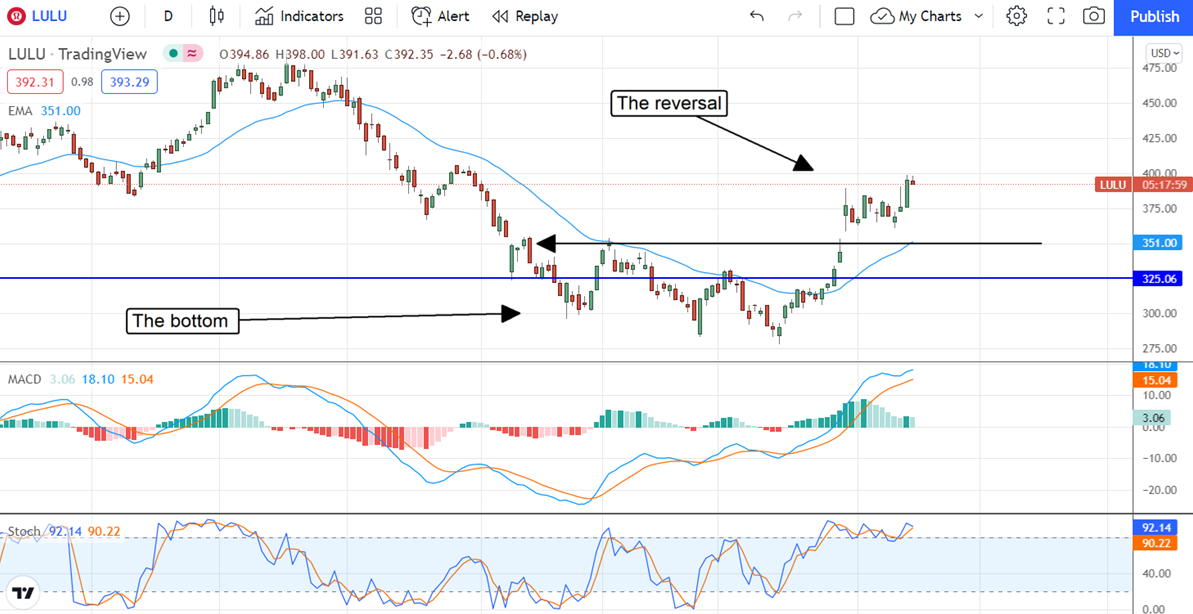