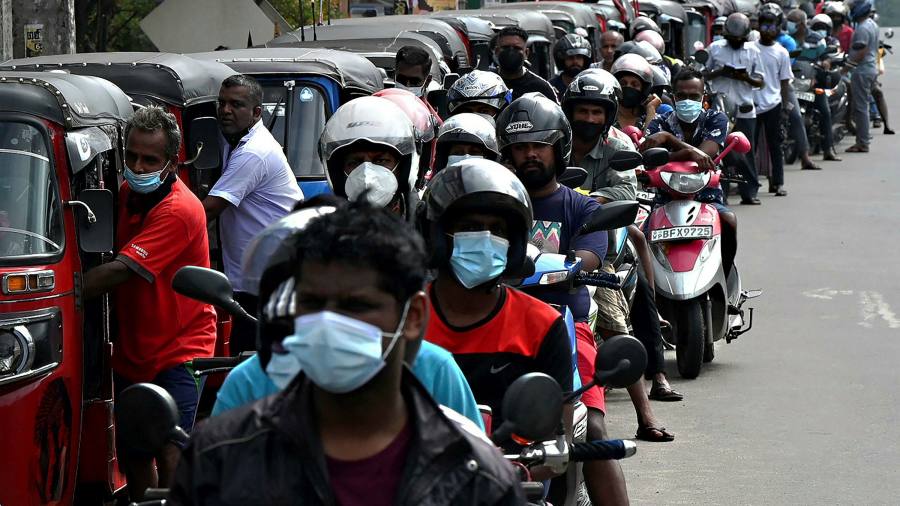 
Sri Lanka’s finance ministry has suspended payments on its government bonds, breaking what it called its “unblemished record of external debt service” in a deepening economic and currency crisis.

In a statement on Tuesday, the ministry said keeping up with repayments had “become impossible”, adding that “although the government has taken extraordinary steps in an effort to remain current on all of its external indebtedness, it is now clear that is no longer a tenable policy”. It described the suspension as a “last resort”.

A “comprehensive restructuring of these obligations” was needed, the ministry said, adding it had turned to the IMF for help in making a recovery plan and for financial assistance. Meetings with the IMF are due to start this month.

Confirmation that Sri Lanka could not service its debt pushed down their prices from already depressed levels, leaving a $1bn dollar bond maturing on July 25 further below face value at a record low of less than 47 cents on the dollar.

The country has a total of about $35bn in external government debt outstanding, with $7bn in payments due this year. The IMF said last month that Sri Lanka’s public debt was at “unsustainable levels”.

The finance ministry advised creditors they could calculate Sri Lanka’s missed payments after today, and add interest, for eventual repayment. It committed to “good faith discussions” with other countries that had lent it money, the largest of which was China, as well as with commercial creditors. 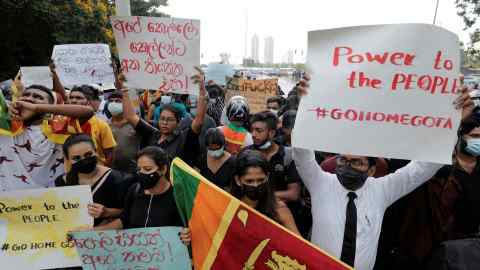 Sri Lanka’s foreign reserves fell to under $2bn in March, and a dollar shortage has dramatically cut imports, leading to shortages of vital commodities such as fuel. The Sri Lankan rupee has fallen by more than 37 per cent against the dollar this year, making it the world’s worst-performing currency.

Colombo has been embroiled in a political crisis this month, after widespread protests against the government prompted a mass cabinet resignation.

Protesters have blamed President Gotabaya Rajapaksa’s government for mishandling Sri Lanka’s economy and causing the crisis. The finance ministry said the hit to tourism from Covid-19 and the surge in commodity prices caused by the Ukraine crisis had “eroded Sri Lanka’s fiscal position”.

Sri Lankans have been suffering from soaring inflation, 13-hour electricity blackouts and shortages of basic commodities. But Prime Minister Mahinda Rajapaksa, brother of the president and a former president himself, chastised demonstrators in a speech on Monday.

“Friends, every second you protest on the streets our country loses opportunities to receive potential dollars,” the prime minister said.

The statement from the finance ministry comes after Sri Lanka’s central bank surprised markets with a 7 percentage point rise to the country’s benchmark policy rate on Friday in a bid to curb inflation. But analysts had warned the move was not sufficient to alleviate concerns over a potential default.