Chart Of The Day: Fundamentals And Technicals Agree – Tesla To Keep Falling


On Friday, shares of Tesla (NASDAQ:) dropped 3% to close out the trading week. Yesterday, the electric vehicle maker’s stock fell 4.83%. It was the fourth decline for TSLA over five sessions.

Since the Apr. 4 high, the Austin, Texas-based company’s shares are down 14.91%. An additional 5% drop would officially put the stock into bear market territory.

Will that happen? We think so based on both the stock’s fundamentals and technicals.

Tesla has been suffering from a confluence of fundamental challenges:

COVID cases in China, already the highest since the start of the pandemic, have continued rising, prompting the country to tighten lockdowns, disrupting sales in the world’s while also suspending operations at its Shanghai factory which has been closed since Mar. 28.

As well, the overall spike in commodity prices has been forcing Tesla to increase the cost of its EVs, likely dampening sales.

A run of bad publicity—including a YouTube video, posted by an employee, of a Tesla vehicle in full self-driving beta mode getting into an accident and news of a customer who has been waiting for a refund for over two years—has added to TSLA’s woes. 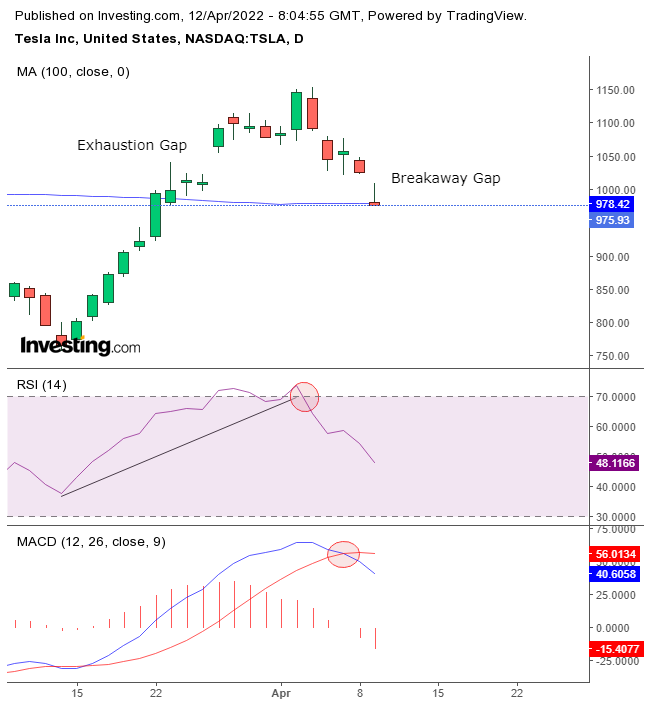 From a technical perspective, the stock completed an Island Reversal. The pattern develops after an Exhaustion Gap, something that appears at the end of a significant market move, when aggressive bulls keep trying to drive prices up but can only maintain the price within a narrow range before the stock loses steam, ahead of gapping to the downside.

The image of the price range separated from the rest of the stock’s trading activity by a gap at either end explains the pattern’s name. Note, the RSI provided a heads up for the Island Reversal. Being momentum-based, it’s a leading indicator. Even the MACD, which waits for the price average comparisons to change and is, therefore, a lagging indicator, gave a heads up before the reversal pattern’s completion.

Finally, the price closed below the 100 DMA after attempting to climb higher—demonstrating the struggle at these levels. It’s essential to identify such skirmishes as they underscore the technical significance of the area, confirming the pattern’s validity.

However, the close below the 100 DMA is quite near, providing runway for the price to bounce back. Plus, yesterday’s candle developed an Inverted Hammer, which can be bullish upon confirmation of a close above its real body (price range between open and close). However, a rebound is acceptable as the gap-top is a resistance. 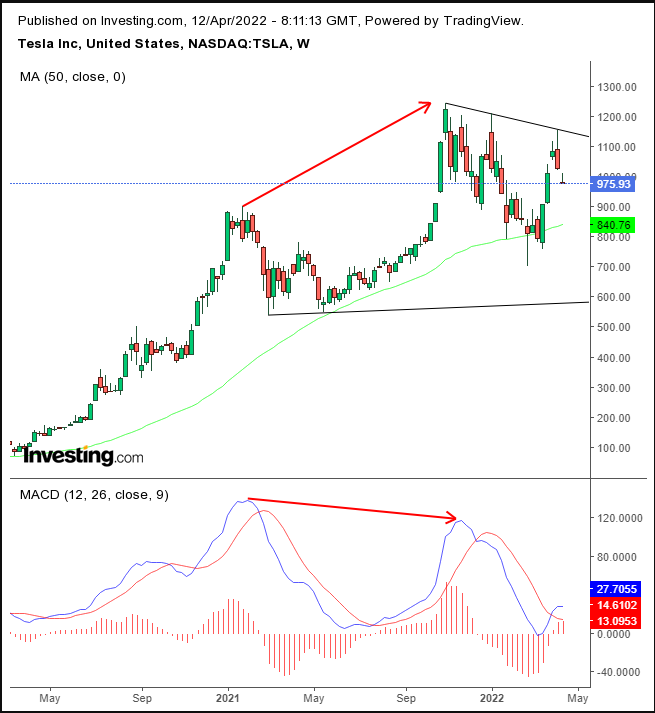 The Island Reversal formed a Bearish Engulfing pattern on the weekly chart when the second red candle completely covered the preceding, smaller-bodied green candle. This pattern visually demonstrates that bulls gave it a go, especially after the rising gap, but bears were able to knock them back and then some, even creating the aforementioned falling gap.

More important than the actual pattern is where it develops. On the daily chart, we pointed out the 100 DMA; on the weekly chart, it meets with the downtrend line. In addition, an Island Reversal is often part of a larger pattern, thus we might be looking at the early stages of an H&S top.

The MACD provided a negative divergence to the sharp rise in the price between January and November.

Conservative traders should wait for the price to close below $950 and to remain below the Breakaway Gap for at least three days, preferably including a weekend. Then, they’d wait for a Return Move to demonstrate resistance when testing the pattern’s actual resistance, the Breakaway Gap.

Moderate Traders would be content with a close below $959 and a two-day filter when the price remains below the pattern. They, too, would prefer a corrective rally to reduce exposure, with an entry closer to the resistance.

Aggressive traders could enter a long contrarian position, counting on a rebound that follows a sharp selloff, with the aid of the 100 DMA and Inverted Hammer, as short-covering could retest the pattern. Money management is critical. Here is an essential trading plan, to showcase the salient points: