Shares of the world’s largest electric car maker, Tesla (NASDAQ:), have staged a remarkable turnaround during the past two weeks.

After surging more than 35% since Mar. 14, the Austin, Texas-based EV maker wiped out all year-to-date losses and rejoined the select trillion-dollar-valuation club. It closed Thursday at $1,077.01. 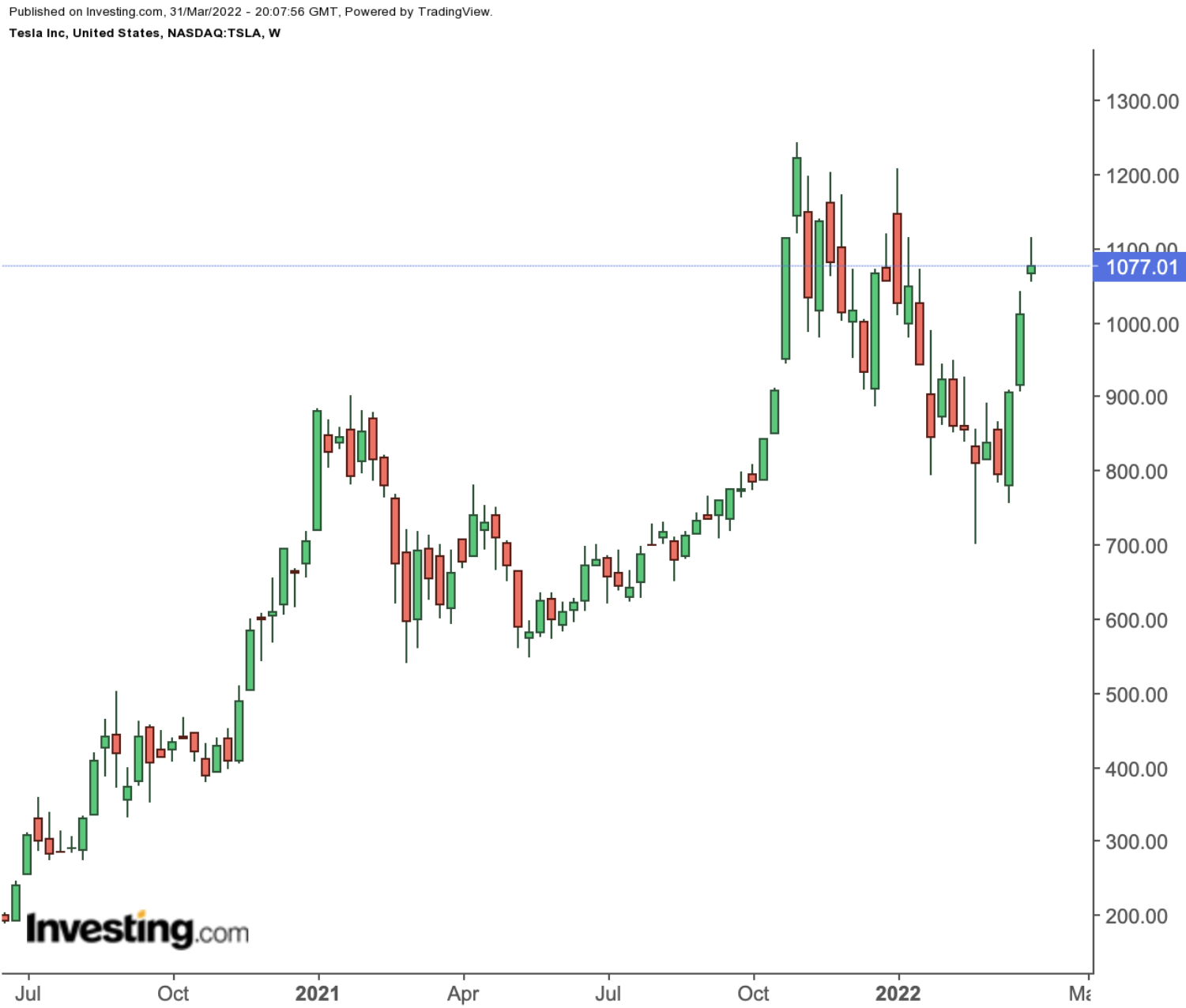 This sharp rebound has left many investors wondering how far this rally could go, especially when the macro environment remains hostile to high-growth names such as Tesla. However, there are many factors behind the company’s current upward move.

First, the EV maker has been much more efficient in dealing with supply chain disruptions than other traditional car companies. While most competitors struggle to find chips amid global shortages, Tesla limited its production to the Model 3 and Y models, securing high productivity levels.

Tesla delivered more than 936,000 vehicles worldwide in 2021, up 87% from the year before and exceeding the 50% average annual expansion projected over several years. The company expects to exceed that growth in 2022 comfortably.

Another factor is the jump in gas prices amid the Russian invasion of Ukraine. Tight supplies of oil are making electric cars more attractive, and even President Biden is calling for greater adoption of EVs.

Tesla, which record revenue and profit in the fourth quarter, is the only profitable EV company for risk-averse investors. Rivian Automotive (NASDAQ:) and Lucid (NASDAQ:), two startups trying to reach the Tesla scale, delivered about 1,000 vehicles last year combined. Meanwhile, Tesla sold nearly a million cars in the same period.

Credit Suisse this week reiterated Tesla as an outperform, saying that despite supply chain challenges, the case for Tesla is “amplified.” The firm added that it was bullish heading into Tesla’s first quarter car delivery numbers. However, the investment bank noted that it was watching for any impact of the COVID situation in China, where production at Tesla’s Gigafactory is currently suspended due to a lockdown in Shanghai.

Furthermore, Elon Musk is going for another stock split to make it easier for retail investors to buy its shares. In a regulatory filing, the company said increasing the number of common shares will allow for a split by way of a dividend. The split ratio is still unclear.

The company’s last stock split, in August 2020, helped propel its share price to a staggering 743% gain that year.

Daniel Ives, a Wedbush Securities analyst, who rates Tesla’s shares the equivalent of a buy with a $1,400 target price, said in a note:

“We view Tesla’s move following the likes of Amazon, Google, Apple and initiating its second stock split in two years as a smart strategic move that will be a positive catalyst for shares going forward.”

Despite these bullish calls, investors must also remember that Tesla is a highly volatile stock, and it’s hard to predict the next move in its shares. While Tesla undoubtedly dominates the electric-vehicle market, its stock is trading at extremely elevated multiples.

According to InvestingPro analysis, Tesla stock is trading at a 12-month price-to-earnings multiple of 205, a level that has set the performance bar so high that there is no space for the carmaker to make any error when it comes to financial performance.

Due to this extremely rich valuation, Tesla’s stock could be a risky bet based on InvestingPro’s model, assigning Tesla $823.62 a fair share value, 23.6% downside risk from the current level. 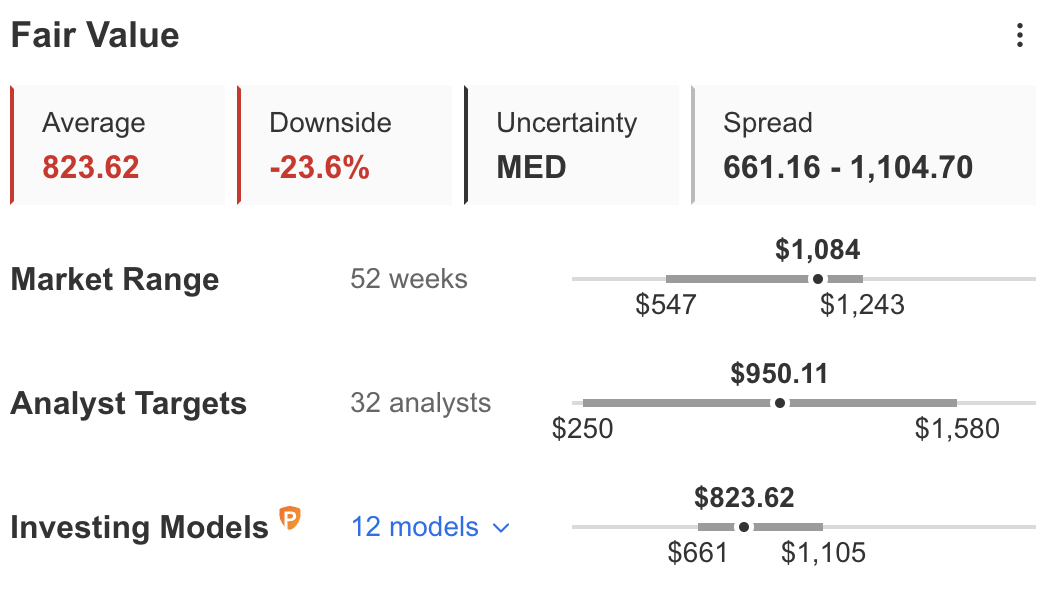 That being said, any pullback in Tesla shares has proven to be a lucrative trade for buyers on a dip. According to Morgan Stanley’s Adam Jonas, Tesla will remain the leader in EV manufacturing, batteries, and autonomy in the foreseeable future, making it a suitable candidate for long-term investors.

“So where does Tesla fit in? We’re not going to tell you that Tesla is a car company. Or a tech company. It’s both. But it’s also an energy company. And what we’re seeing emerge over the course of this year is Tesla as a renewable energy on-shore infrastructure company. We believe Tesla’s role in constructing the EV supply chain (upstream) and EV infrastructure (downstream) will become increasingly evident to the investment community over the next few weeks/months.”

Tesla stock has many catalysts that support a prolonged rally. But after its most recent jump, investors should trade this name with caution and wait for the next opportunity to enter at a much better pricing point, like the one calculated by InvestingPro models.