How To Play Recession Fears For 7.8% Dividends, Upside


With the press bleating about the inverting (again!) and scaring everyone with recession talk, we dividend (and particularly closed-end fund!) investors need to talk strategy.

I’ll drop a ticker that’s perfectly suited for these weird times in a second. First, let’s dive into what the inverted yield curve is—because it actually sets up a nice buying opportunity for us.

The “yield” in “yield curve” refers to the yields on the and Treasury notes. In normal times, the 10-year yields more than the 2-year, but in recent days, that gap has shrunk to nearly nothing:

2-Year Yield Reels In The 10-Year: Recession Ahead? 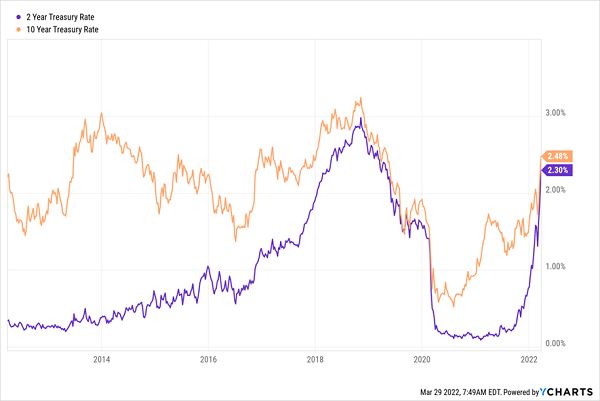 When the two flip, we get the inverted yield curve everyone’s fretting about. And to be fair, there is good reason for concern about an inversion, as one has preceded every recession since 1956. As you can see above, the last inversion came in late 2019, right before the 2020 crash.

Of course, the last recession was caused by a once-in-a-century pandemic, so it’s hard to say the inverted yield curve really predicted that market plunge. But during a previous inversion in 2006, there were more signs of an imminent downturn: house prices were hitting unsustainably high levels, borrowing costs were rising, and many Americans were overleveraged. We can see some echoes of that time today.

Fortunately, we haven’t hit an inverted yield curve yet, and we might not; after all, the distance between yields we’re seeing now is close to what was seen in 1994, although back then, a recession wouldn’t come for another seven years. And investors who sold in panic at that time would’ve missed out on massive gains.

Too Early Is The Same As Being Wrong 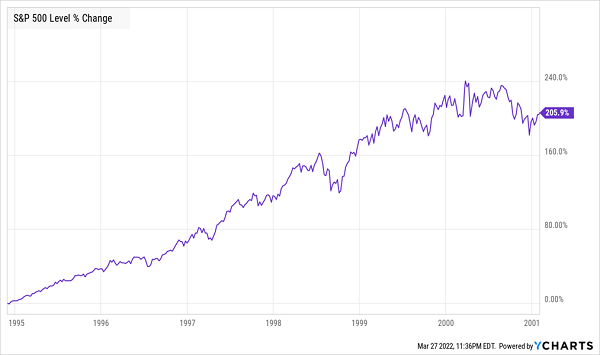 Investors who went to cash when that yield curve tightened and almost inverted would’ve missed a 205% gain in the next few years as they waited for the recession.

That brings up another key point about the yield curve: even when it does invert, there’s always a lag between the inversion and the recession’s arrival. In the 2006 example mentioned above, the inversion preceded the onset of the recession by 16 months, for example—and the market peaked 14 months later, in October 2007.

In both the 1994 and 2007 examples, being out of the market would’ve meant missing considerable upside, and anyone who sells now faces the same risk.

This “Third Way” Dividend Payer Pays Us A Steady 7.8% Dividend

So what are we going to do? We’re going to bolster our portfolios with an investment that does well when recession fears are on the rise: preferred stocks.

Preferreds can trade on an exchange, like common stocks, but they trade around a par value and dole out a set regular payment, like a bond. A major benefit is that you get a higher dividend than “common” shareholders do. Today, preferreds issued by JPMorgan Chase & Co. (NYSE:) yield 4.75%, for example, well above the 2.8% the common stock pays.

And if you buy your preferreds through a CEF—something I recommend, as preferreds are difficult for individual investors to buy on their own—you’ll juice your yield further, to 7.8% in the case of the fund we’ll discuss below.

There’s another reason why preferreds perform well in times like these, and it comes back to the yield curve. Imagine there’s a spectrum of assets in terms of risk, from the riskiest (stocks) to the least risky (Treasuries). As volatility picks up, money flows from the risky to the less-risky end of the spectrum, passing through our “hybrid” preferreds along the way.

Similarly, during that short window when things begin to improve (such as in the middle of 2020, when the Federal Reserve stepped in, economies partially reopened and signs of an effective vaccine were appearing), investors will shift back to common stocks—again hitting up our preferreds along the way.

Our “Checkpoint” Preferred-Stock Play (For 7.8% Dividends)

A fund like the Flaherty & Crumrine Preferred Securities Income Fund (NYSE:) is the perfect vehicle for snagging gains and dividends when investors transition from stocks to bonds and back again.

As mentioned, FFC yields 7.8%, which is another reason why it tends to do well when investors are worried, as that’s when they seek higher-yielding securities. You can see that playing out during the pandemic crash, when FFC beat the benchmark S&P 500 ETF (NYSE:) (in purple) and the iShares 20+ Year Treasury Bond ETF (NASDAQ:), in blue, which is a good proxy for long-term Treasury bonds. 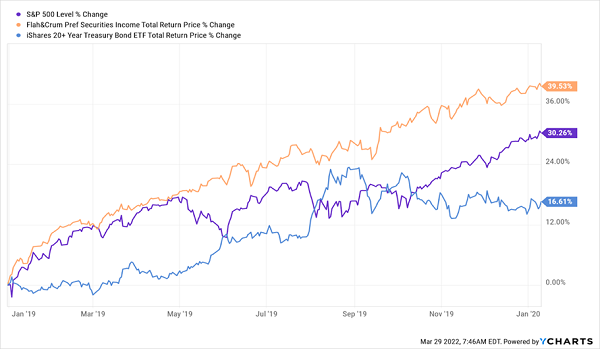 As the name suggests, FFC holds a mix of preferred stocks, as well as bonds issued by banks and insurance companies, like MetLife (NYSE:), Citigroup (NYSE:), and Morgan Stanley (NYSE:). (Financial firms are by far the biggest issuers of preferred stocks.)

Here’s another reason why FFC might make sense for your portfolio now: it trades at a 0.58% premium to net asset value (NAV, or the value of its holdings).

I know that doesn’t sound like such a great deal (who wants to pay more than its holdings are worth?), but this fund usually trades at a higher premium: over the last five years, its premium has averaged 2.9%, and as recently as last November, FFC’s premium was north of 6%. That means we’ve got an opportunity for additional upside as the fund’s premium returns to more normal levels.

Disclosure: Brett Owens and Michael Foster are contrarian income investors who look for undervalued stocks/funds across the U.S. markets. Click here to learn how to profit from their strategies in the latest report, “7 Great Dividend Growth Stocks for a Secure Retirement.”