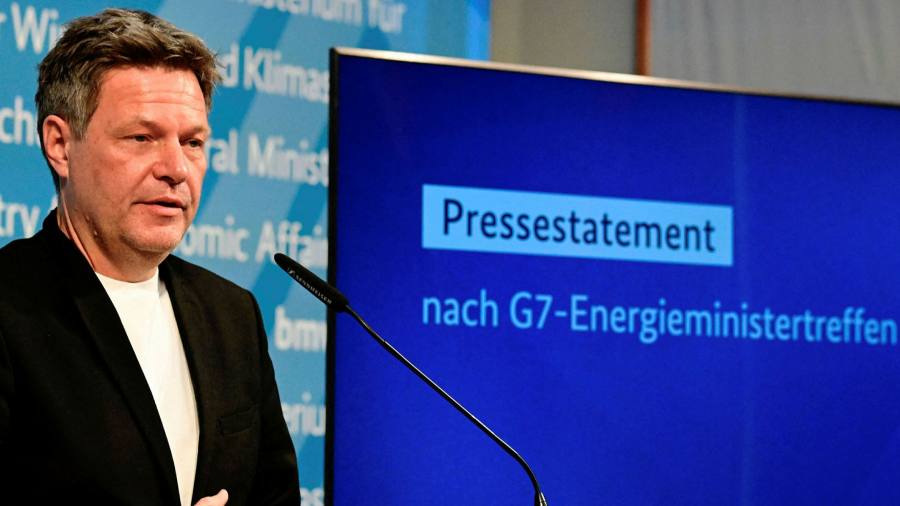 
The German government has taken the first formal step towards gas rationing as it braces itself for a potential halt in deliveries from Russia because of a dispute over payments.

The move was triggered by German concern that Russia might cut supplies to the country and its neighbours because they are rebuffing Moscow’s efforts to force payment for gas imports in roubles.

During Germany’s early warning phase — the first of three stages in its emergency response — a crisis team from the economics ministry, the regulator and the private sector will monitor imports and storage.

If supplies fall short, and less draconian attempts to lower consumption do not work, the government would cut off certain parts of German industry from the grid and give preferential treatment to households.

Russia’s state-owned gas supplier Gazprom and the country’s central bank are due to report to Putin on Thursday on a mechanism to implement the change of payment currency for gas to roubles.

Asked whether the new rules for payments for Russian gas will take effect on Thursday, Kremlin spokesman Dmitry Peskov replied: “No, absolutely not.”

Volker Wieland, a professor of economics at Frankfurt University and a member of the German council of economic advisers, on Wednesday warned that a halt in Russian energy supplies would create a “substantial” risk of a recession and bring Europe’s largest economy “close to double-digit rates of inflation”.

Even without any disruptions in Russian gas supplies, Germany’s inflation rate could reach 6.1 per cent this year, said the economists who advise the German government. Should energy imports from Russia be cut off, it would rise to between 7.5 and 9 per cent, the council said.

Habeck, who is also vice-chancellor, told journalists in Berlin that the step was taken in anticipation of the Russian law, which conflicts with the denomination of long-term supply contracts in euros or dollars.

“We won’t accept a [unilateral] breach of contracts,” Habeck reiterated on Wednesday morning.

The EU has set a goal of filling up gas storage sites to 80 per cent of capacity by the start of November to secure supplies to see its members through winter, a level that Germany failed to achieve last year.

Germany’s gas storage facilities are currently about 26.5 per cent full, after hitting a four-year low of 24.6 per cent earlier this month, according to Gas Infrastructure Europe.

Thomas Rodgers, European gas analyst at ICIS, an energy consultancy, said: “The national and EU-wide target of 80 per cent by November 1 looks feasible but expensive, as long as Russian flows remain undisrupted and the continent outbids Asia to bring in LNG cargoes.”

Habeck stressed that for now the gas supplies from Russia were flowing normally.

However, as Germany is trying to wean itself off Russian gas, and now imports more LNG via third countries, Russia’s market share of German imports has fallen from an average of 55 per cent in recent years to 40 per cent in the past few weeks. Germany has no LNG import terminals.

Last week, Germany unveiled targets to cut its dependence on Russian energy rapidly, vowing to all but wean itself off the country’s gas by mid-2024 and become “virtually independent” of its oil by the end of this year.

Europe’s wholesale gas price rose 11 per cent to €118 per megawatt hour on Wednesday morning, about seven times higher than a year earlier.

Peskov stressed that “payments and deliveries are a process spanning a certain period of time”, according to Russian news agency Interfax. “It’s not like it’s delivered tomorrow and must be paid for [immediately in roubles].”

His comments signalled that Europe’s gas buyers have at least a month before rouble payments become mandatory, according to analysts. March gas deliveries have already been made and will be paid for in the coming days. Payments for most April deliveries are not due until the start of May.

In a sign of Russia digging in, Peskov said the country should consider selling a wider range of exports in roubles, such as grain, fertilisers, metals, wood and oil.

Referring to the proposal from a Russian member of parliament, he said: “For sure this idea must be studied in depth . . . There are many countries that are showing an interest in mutual settlements in national currencies.”

Also on Wednesday, Polish prime minister Mateusz Morawiecki said his country planned to stop importing Russian oil by the end of this year and end coal imports by the end of May as part of a drive to wean itself off Russian energy sources.

Poland derives about 70 per cent of its energy from coal, most of which is mined domestically, but it also imports large volumes of gas from Russia. In recent years it has been building infrastructure — including an LNG terminal on its Baltic coast and a gas pipeline from Norwegian gasfields — that will allow it to manage without Russian gas when a long-term gas contract with Gazprom expires at the end of this year.

Russia Returns US Astronaut From ISS Despite Ukraine Tension